Alla Kovgan's look at the life of iconic dancer and choreographer Merce Cunningham will appeal to modern dance geeks, but has little for neophytes. 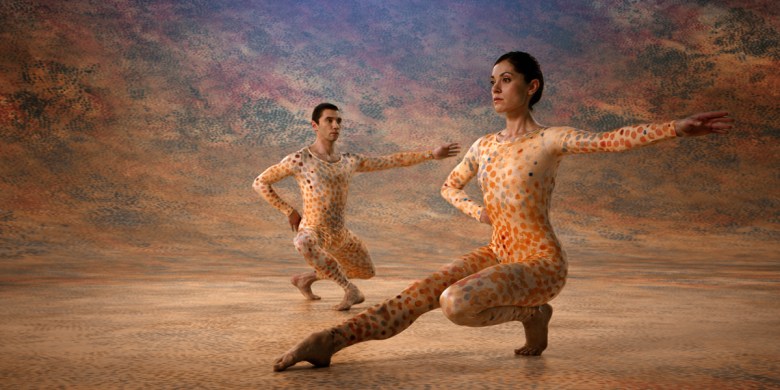 Merce Cunningham wasn’t concerned with labels or conventions, the kind of guy who would shrug off not just claims that he was one of best choreographers of all time, but even the claims that he was a choreographer (“I’m a dancer,” he’d tell people). The modern dance pioneer helped not only bring the art form to American eyes, but also managed to shape it in his own image. Over the course of a career that spanned seven decades, he crafted his own style, built a successful dance company, and worked with other artists from every corner of the creative world (Brian Eno and Radiohead, Andy Warhol and Frank Stella, and those are just the biggest of big names). In short, he’s the perfect candidate for a deep dive documentary about both the personality and his process.

Alla Kovgan’s “Cunningham,” though appropriately stunning to the eyes and often in tune with Cunningham’s unique wavelength, is not that documentary. While Kovgan, a Russian filmmaker who has made her own contributions to the world of dance through film and performances, has a clear affection and respect for Cunningham, her solo feature debut is unable to do much more than hold him at arm’s length. Not that Kovgan is totally constrained by her own interest in Cunningham and his work — her treatment of Cunningham’s dances, brought to life in fresh performances, is a highlight of the film no matter your awareness-level of his work — but the overall truncated nature of “Cunningham” keeps it from being essential.

Perhaps that’s due to Kovgan’s desire to totally step away from documentary conventions in order to tell a story that is anything but conventional. “Cunningham” is divided between two distinct modes of storytelling: archival footage laying out Cunningham’s history and trajectory, spliced into revelatory segments that feature his dances in unexpected settings with new dancers. That divide sometimes works, as archival audio and footage of Cunningham and his closest collaborators is helpful in explaining his aesthetic and aims — not always a given in films like this — before turning to dance segments that bring it to vivid life. (The film was first presented in 3D, and while the new 2D presentation loses a bit of its verve, Cunningham’s genius was so great that it still bursts through the screen.)

It’s when Kovgan leans too hard on her archival reserves that “Cunningham” loses its tenuous footing. While Kogan has assembled a wealth of footage, it is often needlessly gussied up into the cinematic equivalent of a scrapbook, photos and film and drawings layered over shot after shot in an unsophisticated mishmash. It’s the kind of fussy thing that Cunningham himself would have balked at, a cheap way to interpret a life that never fit into such easy perimeters.

Cunningham was compelled by the idea that his dances weren’t an interpretation of anything else, not “set” to music or used to tell an old story, but that they were wholly their own thing. “Cunningham” doesn’t let itself believe the same credo, instead opting to spoon-feed basic information to its viewers through the most boring of treatments. Merce Cunningham would be the first person to say that his work speaks for itself, but Kovgan resists that idea, even as she’s capable of crafting and shooting gorgeous sequences that do just that.

But even the dance sequences, staged in inventive settings Cunningham would have likely loved, from brightly lit tunnels to wondrously still gardens, can’t wholly obscure the lack of depth elsewhere in the film. While the film doesn’t posit to be a definitive look at Cunningham, it still only explores one section of his life (running mostly between 1942 and 1972), and even then with a large gap. Some viewers will likely be shocked to learn in a post-script that Cunningham kept working until he was 90. Where, they may ask, are those decades? (One can only hope that interested parties go digging for more information on Cunningham’s later years, including the fascinating and clever plan put into place by the company to preserve his legacy after his death.)

How Cunningham came to dancing is never addressed, nor is how he handled the tough early years of trying to form his company in the competitive environs of New York City. His personal life isn’t really dealt with at all — that his long-time romance with composer and frequent collaborator John Cage is mentioned so often only seems to be because it tied into his work — and anyone looking to know more about the man underneath will come up short.

But, oh, the dancing. Even decades since creation, Cunningham’s choreography still stuns, fresh and unique and begging for both its dancers and viewers to actively consider its meaning. It is always its own thing, a pure expression of art that delights as much as it pushes for engagement and wonder. Stripped away from convention and without explanation, it flies, but stuck inside tired modes of storytelling, it only stumbles.

A Magnolia Pictures release, “Cunningham” is now available on VOD and DVD.

This Article is related to: Film, Reviews and tagged Cunningham, Reviews