Italian cinemas are at 30 percent capacity during the international outbreak, but that doesn't mean moviegoers should stay at home. 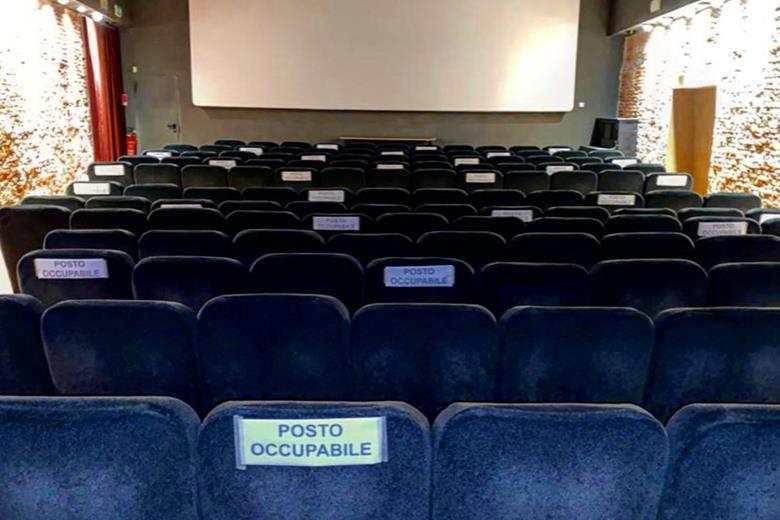 As the coronavirus ravages the global film industry, which saw the cancelation of Austin’s SXSW on Friday afternoon, theaters in Italy have a novel solution to putting moviegoers in seats: Keep them three seats apart. According to Screen Daily, emergency regulations now mandate that audience members remain at least a meter’s distance — or just more than three feet — from each other. That policy is reportedly in place throughout Italian cinemas until April 3. This rule also extends to other live events and gatherings as Italy puts its public spaces on lockdown while dealing with the biggest coronavirus outbreak outside of Asia. As of Friday, more than 4,500 people tested positive for COVID-19, and nearly 200 have died.

The Screen Daily report said that ANEC, Italy’s national association of film exhibitors, estimated that cinemas can continue to operate at 30 percent capacity. “Though it’s too early to know how many of our associates will stay open and how many will choose to suspend activities,” ANEC president Mario Lorini said.

However, enforcing the regulation is another story.

“We expected a much more restrictive measure, and we’re happy to see there is space for cinemas to be open, though it’s all still a work in progress,” Lorini said. “We have been working around the clock to have a better understanding of exactly what is allowed and what is not. Cinemas come in different shape and forms, big or small; we need to know how every exhibitor can manage to comply to the law and stay open.”

Cinema Arsenale, a movie theater located in Pisa, Italy, posted an image of the setup via Instagram.

Lorini added that “many details still need clarification. For example, since what has to be allowed is ‘interpersonal security distance,’ [it] seems like it shouldn’t concern husbands and wives… But really it’s too early to say. We are all still figuring out what is best to do and as soon as we will have clarified with the ministry the correct interpretation of the law, we will give our official advice.”

What this means for distributors and their release dates remains an open question as the virus continues to rock the production, distribution, and exhibition of movies throughout the world. On February 26, Paramount Pictures shut down production on “Mission: Impossible 7,” which was taking place in Italy.

“The consequences of a too-long extension of this situation will have a devastating impact on distributors,” Roberto Proia, executive director of theatrical distribution and production at Italy’s Eagle Pictures, told Screen Daily. “We are constantly in talks with the exhibitors, and we will base our decision on release dates on what they will decide to do. If there are no theatre open movies can’t be released, as simple as that.”

This Article is related to: Film and tagged Coronavirus