Showtime's sophomore comedy created an extraordinary frozen scene for the Season 2 finale, and IndieWire was there to see how it happened. 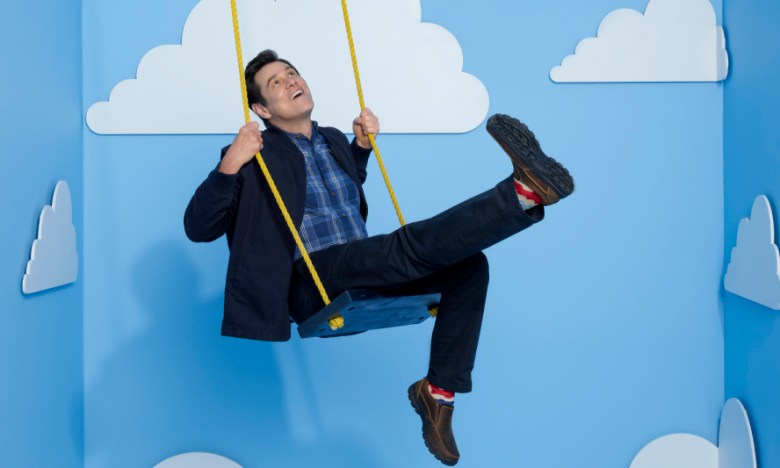 Jim Carrey is frustrated. It’s approaching 90 degrees on an unreasonably humid August afternoon in downtown L.A., and the “Kidding” star has just flubbed his line for the second time.

Standing with co-star Judy Greer in an alley decorated to look like Manhattan’s Little Italy, the duo is trying to get through a lengthy piece of dialogue while dozens of extras move silently around them. The pressure is on — and it’s on for the second time that day. Just hours earlier, Carrey faced a different challenge in the same position, as he walked through the same alley with the same swarming extras in the same brutal heat. Only then, every other actor was frozen.

“When something like that [scene] is being designed, I get very excited,” Carrey said in a later interview. “I want to be part of the neat stuff. On the simplest of levels, [I like] the stuff that looks cool. So when someone gets inventive with the camera, or a [sets up a] speciality shot, I’m absolutely a kid on Christmas morning.”

For what Carrey called “the frozen scene,” his character, children’s TV host Jeff Pickles, is in the middle of a flashback, remembering how he flew to New York to tell his future wife (and ex-wife) Jill (Greer) that he wants to be with her. Carrey described it as Jeff’s “full-on ‘Graduate'” moment, “running through the streets, trying to find the love of my life after I’d blown it.”

After a short foot chase, Jill peddles away on her bike, and that’s when it happens: Jeff yells her name, and time stops. Giant bubbles are left suspended in mid-air. Spinning dancers pause mid-twirl. A woman dressed in a cannoli outfit trips and hovers just above the ground, with her tiny pastries frozen alongside her.

Jeff walks through stillness, smiling with wonder as he examines the floating bubbles, gently sliding an unflinching dancer out of his path, and ducking under a frozen stream of water shot from a plastic pistol. When he reaches Jill, he stops to grab a handful of runaway balloons and slip some money into the vendor’s breast pocket — a choice Carrey and creator Dave Holstein came up with on the spot.

Then time starts back up again, as though nothing happened. 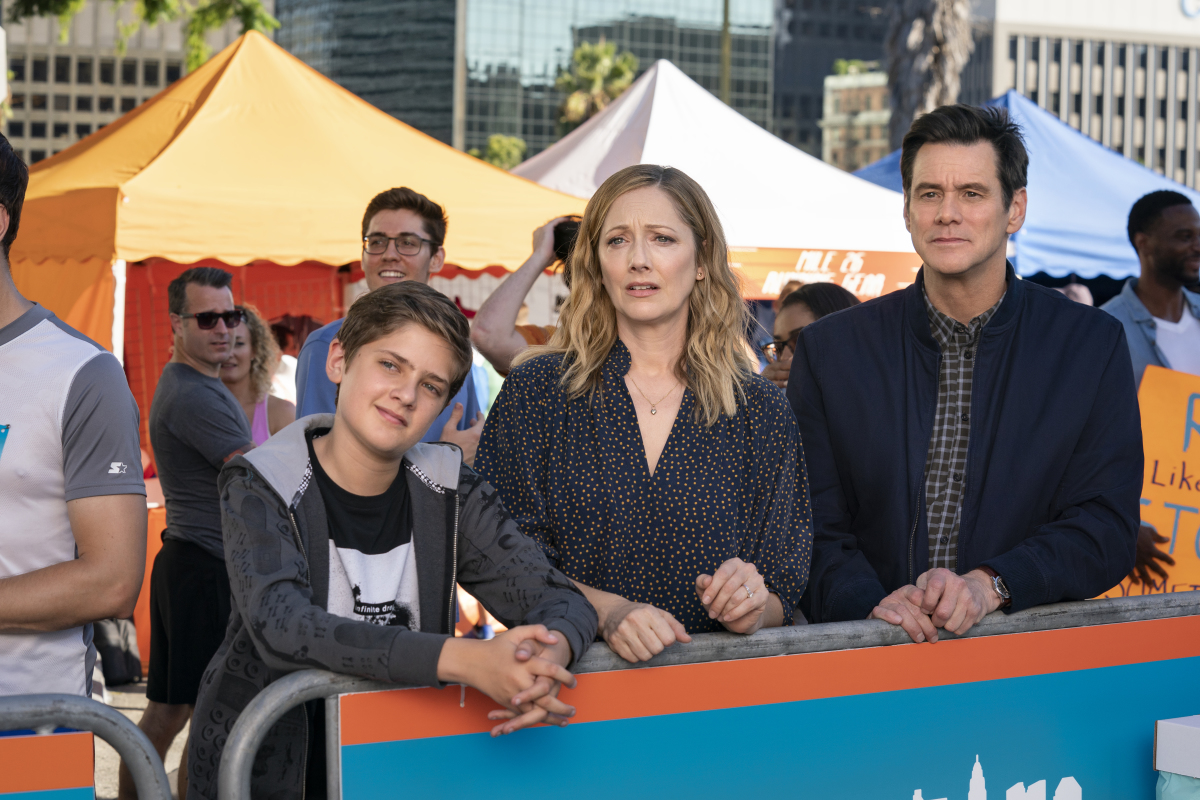 “I like to tell people that I just went really fast while everyone else was going normal speed,” Carrey said, “but that just happens in my head.”

If only it were that easy. The “Kidding” crew started setting up the street the night prior to shooting, arriving at 4:30 a.m. the day-of to start placing props, go over blocking, and run through the scene. The frozen actors weren’t specialists; they were hired straight from extras casting. Special podiums and support stands, later removed during post-production, were designed to help stabilize limbs and hold objects in mid-air. The dancer Carrey glides aside was placed on a tiny dolly that Chris Soos, the director of photography, had to be sure stayed out of the shot.

It took only three takes to get it all just right, a testament to everyone working together for an elaborate — and beautiful — vision. To Carrey, that surreal scene represents a blend of reality and fantasy to Jeff, as the choice to literally freeze time represents a universal feeling everyone should recognize.

“I think he’s experiencing life slowed down to stillness, to still frames, to memory. Memories are often still frames. Memories slow things down, and he’s got a different perspective going on at the same time,” Carrey said. “I am the character caught up in that moment where I have to find Jill, but I think it’s [also] a meditation on presence. At the most intense moments of your life, there is a slowing down of the action; there is a hyper sense of presence that happens to you.”

And then the moment ends. The unfreezing had to be just as carefully designed as the freezing, as Jeff walks in front of Jill, holding the balloons, and then everything starts moving again. Bubbles burst; the balloon vender looks confused, then finds the money in his pocket; cannoli come crashing to the ground.

“I’ve only got two people helping the cannoli [vendor],” first A.D. Jose Gilberto Molinari-Rosaly says. “Everyone else should be going about their business.”

“Why is she helping him up?” Holstein says to himself from video village. “Why isn’t she kicking him? This is New York — they should take his wallet.”

Holstein, who was on set every day of the shoot, watched the day’s scenes from Garo’s Deli, where three monitors were set up in front of the drinks cooler and break stations were designated as what are typically dining tables. Every few minutes, the showrunner would get called out to set or head out himself with an idea (like the one above). Easy-going yet focused, Holstein was nearing the end of his second season on “Kidding” — and it had been a doozy.

In Season 2, that included spending three days on an aircraft carrier to shoot a funeral at sea, going to Dick Van Dyke’s house to record an original song written by Holstein, and building an entire episode within Mr. Pickles’ children’s show, complete with new sets, puppets, and the show’s trademark innovative visual charms. 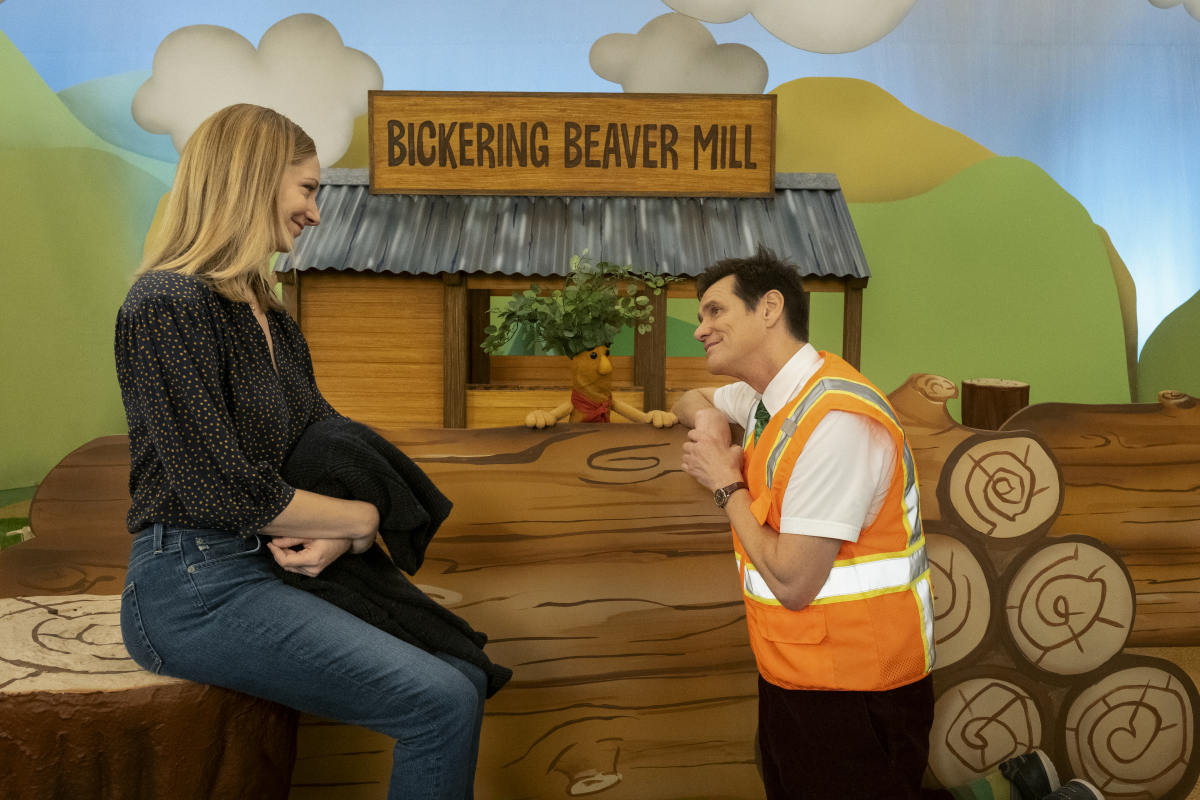 But at its core, “Kidding” is about Jeff unburdening himself. He’s been a children’s host for so long, he gets lost playing the character the world expects him to be, instead of being honest about the man he really is. When Jeff runs to find Jill and time stops, it’s only after he rejects her because he’s married to his job. That’s why the scene is so important, and that’s the main reason it’s worth all the effort — not only is it a stunning piece of craft work perfected by dozens of people working together, but it’s essential to the show’s artistic expression.

“I think it’s him putting authenticity first, for the first time,” Carrey said. “There’s the thing he wants to be for everybody […] and that might be a part of him, as it is with me. It’s entirely a part of me to be the jovial, joking-around guy and have fun with every moment. But there comes a time when you go, ‘If that can be a part of me and I can be authentic as well, that’s great. But if not, then guess who has to die?’ One or the other has to go, and Jeff has made the decision to be authentic at all costs. I believe that’s a really important thing to share with people.”

Carrey said he’s recently gone through a similar kind of acknowledgement and he’s now “living [life] like it’s never been lived.” “[There’s] an incredible kismet between the parts I’m playing and what’s actually occurring in my life. It’s really extraordinary.” He’s done with Donald Trump and energized by all the great work out in the world. If there’s a “Kidding” Season 3, which has not yet been ordered by Showtime, Carrey is enthusiastic about how Jeff’s next adventures could mirror his own.

“It’s always a combination of where could the character go, where could this family go, and also where am I going — where am I actually going — and how could the two be married?” Carrey said. “I think it could be a really exciting season as far as what occurs, what begins to percolate after all that truth is out; after the weight is out and the ballast has been thrown overboard, look out, man. You have no idea what’s possible with a human being once they deal with all that.”

First, though, he’s got to get this line right. One might think the hardest part of the day is behind him, having completed the frozen scene and locked it in the can. But that’s only half of his job, just like it’s only half of “Kidding.” For every stunning piece of collaborative craftsmanship, there’s a moment where two people have to look each other in the eye and connect, honestly.

“It’s a challenge, but that’s the fun of this art form,” Carrey said. “One day you’re doing something that’s deeply, deeply interior-based and ripping you apart emotionally, and the next moment you’re just flat-out being chased by a dinosaur that isn’t there. […] There’s always a bit of butterflies and pressure. Before every single scene, no matter how cool you are, you have to have that percolating beneath the surface. I don’t think you’d be interesting to watch if you didn’t.”

Then he paused, thinking. “I’ve never been cool,” he said. “I can act cool, but it’s generally an affectation.”

Carrey, still fighting back sweat, nailed his line on the next take.

Both seasons of “Kidding” are available to watch now via Showtime.