It’s been long past time for Madam C.J. Walker to get her due on the small or big screen, but this series is, sadly, a disservice to her. 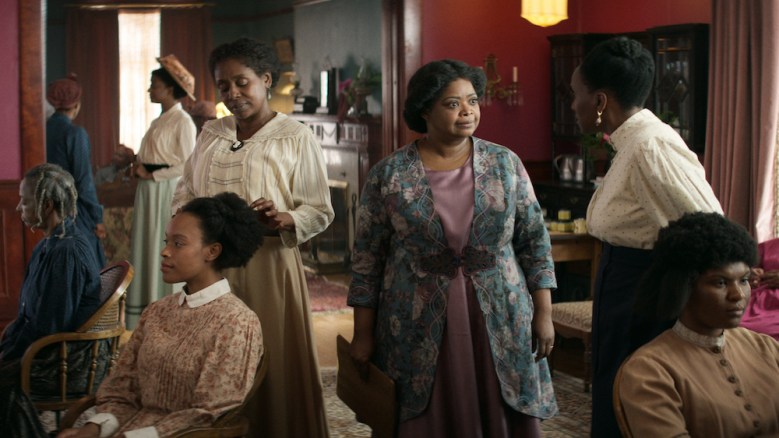 Octavia Spencer in “Self-Made: Inspired by the Life of C.J. Walker”

The title of Netflix’s miniseries “Self Made: Inspired by the Life of Madam C.J. Walker” implies that it’s not entirely a factual retelling of the pioneering entrepreneur, philanthropist, and activist’s life. In fact, the influence fundamental to Walker’s remarkable story barely exists in this rather underwhelming jumble.

The one thing that’s clear is that writers Nicole Jefferson Asher and Elle Johnson (working from a bio written by Walker’s great-great-granddaughter A’Lelia Bundles) and directors Kasi Lemmons and DeMane Davis want to tell a story that inspires and entertains. The degree to which they succeed in doing that is what’s ultimately in question. It’s pointless to critique creative license here, as many critics continue to do, so don’t expect much of a deep dive into the itinerant history of Walker’s business, which is highly abridged in the series, as are her philanthropic and social work. But what did end up on the screen is very awkward at best.

When we first meet star Octavia Spencer as Walker, it’s as a boxer in a boxing ring, draped in a satin robe, holding up her boxing gloves to apparently knock out whoever and whatever stands in her way, as an upbeat contemporary hip-hop track overwhelms. That it’s not L.L. Cool J’s “Mama Said Knock You Out” is actually one of the few smart choices made here. This somewhat cringeworthy motif is repeated throughout, almost serving as visual interstitials, because the series is set up as a title bout between Spencer’s Walker (née Sarah Breedlove) and Addie Munroe — a cartoonish reimagining of Walker’s real-life rival Annie Malone, played by a typically reliable Carmen Ejogo as a “baddie” so over the top in her vindictiveness that she’s laughable. It unnecessarily belittles Malone, who established a significant and prominent commercial and educational venture for African-American women cosmetics.

But where “Self Made” ultimately fails, in four episodes that are each roughly 45 minutes to an hour long, is to give a very firm idea of who Walker was or how she built her empire. It instead relies too much on an unwarranted flair in order to tell, what on paper, is an already thrilling story of a black woman — born to former slaves just after Abraham Lincoln issued the Emancipation Proclamation — who eventually became the richest self-made woman in America of her time. There are more than enough tales of legendary rivalries and turbulent relationships in this mostly untold and highly unlikely story of the black hair care pioneer during turn-of-the-century America.

Additionally, instead of attempting to make “Self Made” hit several beats of Walker’s life, it should have focused on a shorter, more significant time period. And so it never really slows down enough to allow audiences to fully connect with the titular character.

More issues arise with an at times anachronistic and too frequently used score, which includes snippets of Santigold’s “Creator” and Diana Gordon’s “Woman,” which are absolutely beautiful pieces of music separately but are used in such unexpectedly uninspired ways here. This is because the series aims to bring a modern sensibility to Walker’s story, in an effort to a give it contemporary edge. But they feel so out of place.

In multiple sequences, Walker’s point of view is personified as a colorful line of bopping stewardesses in a kind of hoedown, and “Walker Girls” on bicycles. While these might be mostly playfully innocuous, they are entirely unnecessary theatrical flourishes that also cheapen her story and accomplishments, in a way.

Certain plotlines are stressed over others, or, in some cases, totally manufactured, in order to amplify the drama. For example, Walker’s daughter, Lelia (Tiffany Haddish) becomes enraptured in a lesbian romance while also engaged to be married; a menacing, if overbearing Bill Bellamy plays a man of questionable morals and ethics named Sweetness; and Walker’s husband C.J.’s wounded self-esteem and eventual disloyalty are cliched and ultimately tedious. And their scripted exchanges have no real bite.

But again, maybe it’s a waste of time comparing fact and fiction.

As for the performances, Spencer’s is smart and contained, and is probably the best thing about the series, even if it is at times too reserved. The series doesn’t necessarily paint her as a sympathetic character — which it probably wants to, but it fails. She’s ambitious to a fault, and sacrifices her marriage and other close relationships in order to build her business. And she succeeds as many men with a similar temperament have done throughout history, so maybe she shouldn’t be rebuffed for that. But the resulting fallout is predictable — for example, her husbands cheats on her — and therefore uninteresting.

As for the rest of the main cast, Haddish, who never really convinces as an early 19th century doyenne-to-be and 18 years Spencer’s junior as her daughter, is woefully miscast here. The saying goes that comedians typically make for great dramatic actors/actresses, but such is absolutely not the case here. Blair Underwood is serviceable, doing his best to play the loving, supportive husband who wants to be recognized for his contributions to Walker’s empire. Kevin Carroll (as Walker’s lawyer) and Garrett Morris (as C.J.’s father, a former slave who comes to live with his son and Sarah), are maybe two of the few highlights.

But what the series absolutely, unequivocally should’ve been, is something more reverential, with a lot of serious, cineastic appreciation. It thankfully isn’t an immersion in dread like movies and TV series set during this period tend to be — when black people were only a few decades removed from slavery — and it doesn’t have the inspired scope and intricacies of literary depictions of the era. It is more like one of those pseudo biographies of historical figures intended for young audiences: overly simplified and accessible. But in doing so, it sacrifices plenty.

It’s been long past time for Madam C.J. Walker to get her due on the small or big screen, but this series is sadly a disservice to her. And it’s too bad because Walker’s remarkable biography has all the right elements: the Horatio Alger-esque “rags to riches” story, through hard work, moral and ethical fortitude, that audiences often fall for. The series’ creators really should have stuck to Walker’s real-life story of a formidable, strategic intellect, and an evasive, almost enigmatic quality as well. Because she is someone everyone should know much more about.

“Self Made: Inspired by the Life of Madam C.J. Walker” is now streaming on Netflix.

This Article is related to: Television and tagged Netflix, Self Made: Inspired by the Life of Madam C.J. Walker, TV Reviews