David Simon's penchant for carefully nuanced storytelling feels like watching a car crash in extreme slow motion, and it's not working here. 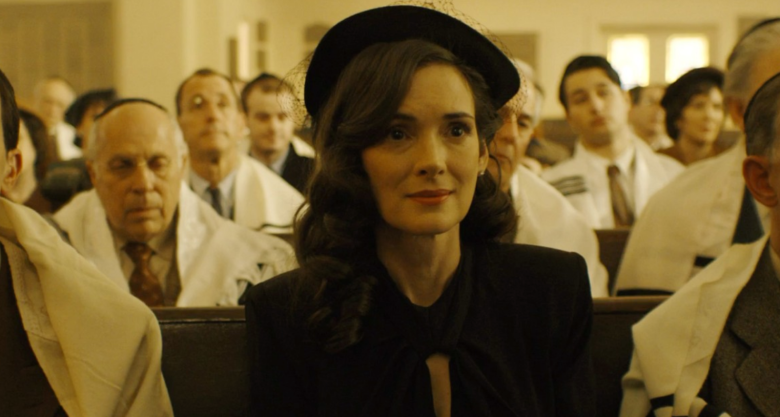 Winona Ryder in “The Plot Against America”

In his new HBO limited series, David Simon has just six hour-long episodes to cover the events of Philip Roth’s novel “The Plot Against America.” While the first episode took its time to set the stage, establish the players, and introduce the show’s fictionalized time period, the second episode did…pretty much the same thing. That’s not a good thing when you have limited time with which to tell a story. Things happened, sure, but even by the episode’s end, it still feels like Simon is putting the chess pieces in place rather than making any significant moves. What’s more, it’s easy to see 12 moves ahead, even if you haven’t read the book. The result makes for very dull TV indeed.

[Editor’s Note: The following review contains spoilers for “The Plot Against America” Part 2.]

Part 2 opens with a small rally (such a sight never looked so menacing as in these times) at a Newark airport, with crowds gathering to see Charles Lindbergh (Ben Cole) emerge from his personal plane. The camera glides through the crowd following the elder Levin brother, Sandy (Caleb Malis), who forces his way up through the zealous onlookers to get a better look. His interest in Lindbergh is unsettling but not surprising; Part 1 concluded with Sandy huddled under his blanket with a flashlight, sketching the xenophobic aviator his Jewish parents fear with a passion.

More unsettling is the prominent positioning of Sandy’s Aunt Evelyn (Winona Ryder) in the crowd, as she looks on with an eerily vacant expression that wreaks of dangerous naiveté. Evelyn is the guest of Rabbi Lionel Bengelsdorf (John Turturro), a respected religious leader from Newark who has become a fervent Lindbergh acolyte. After a string of romantic disappointments, Evelyn is a prime target for Bengelsdorf’s advances. And anyway, she assures her sister, he’s a Rabbi! What more could you want from her?

Much of the episode is devoted to setting up this worrisome relationship, as well as illustrating Lucky Lindy’s successful campaign and Bengelsdorf’s own rise with him. Evelyn looks on proudly from backstage during a Lindbergh rally as Bengelsdorf assures the crowd that Lindbergh is not an anti-Semite, his multiple trips to Germany were merely diplomatic missions on behalf of the U.S., and how could he hate Jews if he will shake a Rabbi’s hand? 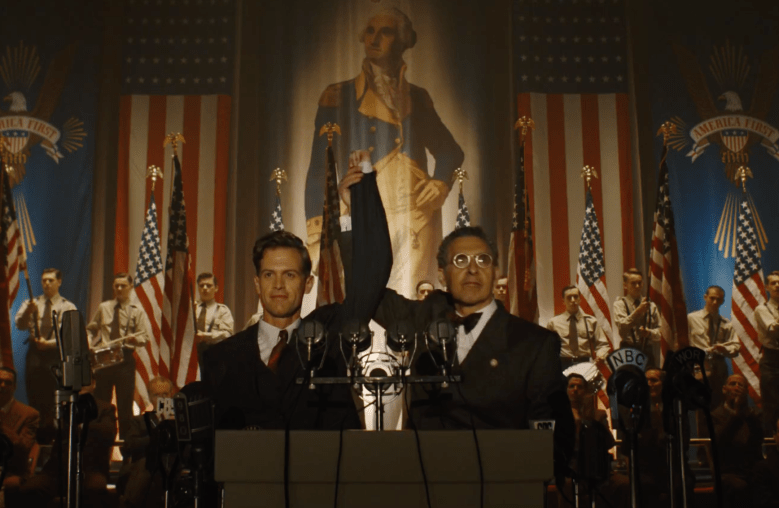 John Turturro and Ben Cole in “The Plot Against America”

The Levins crowd around the radio listening at home, sick to their stomachs, arguing so loud they wake up the kids, and unaware of Evelyn’s involvement. In an unusual spell-it-out-for-you moment, they realize Bengelsdorf is not there to convince Jews to vote for Lindy, but to give the goyim the thumbs up to vote for him without having to feel guilty. Bengesldorf is Lindbergh’s Kanye.

The filler between these dramatic beats is steeped in a kind of comforting nostalgia, as the show seems to revel in a fondness for the cultural traditions of the neighborhood and a simpler time. There’s a stop to the donut shop for jelly donuts, and the bustling Tabotchnik’s deli for a heaping pile of sturgeon (pronounced: stoy-jen). There’s a familial tableau as Herman (Morgan Spector) and Bess (Zoe Kazan) whip out their best George Burns and Gracie Allen bits to cheer up the kids during troubling times.

Each of these moments demonstrate Simon’s incredible dedication to realism when it comes to the fabric and texture of a particular time and place, as he did with inner city Baltimore in “The Wire” and Times Square in “The Deuce.”

In “The Plot Against America,” however, it feels self-indulgent rather than an essential element of the storytelling. Perhaps since Simon is working off of Roth’s writing, and not a story he himself researched and developed, “Plot” lacks the signature Simon gravitas. In his earlier work, a seemingly throwaway scene is never truly thrown away, because every beat is there for a reason. Even if it’s simply establishing a character trait, it’s always a window into how a character thinks or reacts that will show up later on.

With four more episodes to go, there is always the possibility that Simon has more tricks up his sleeves. Part 2, as meandering and muted as it was, could very well end up becoming thematically relevant down the line. But so far, all the set-up is making the series feel like a sputtering solo flight that never quite takes off.

“The Plot Against America: Part 2” aired on HBO on Monday, March 24.

This Article is related to: Television and tagged HBO, Reviews, The Plot Against America