A superb Poots carries this sometimes shaky, but never boring, "Twilight Zone"-like thriller, which seems readymade for the age of self-isolation. 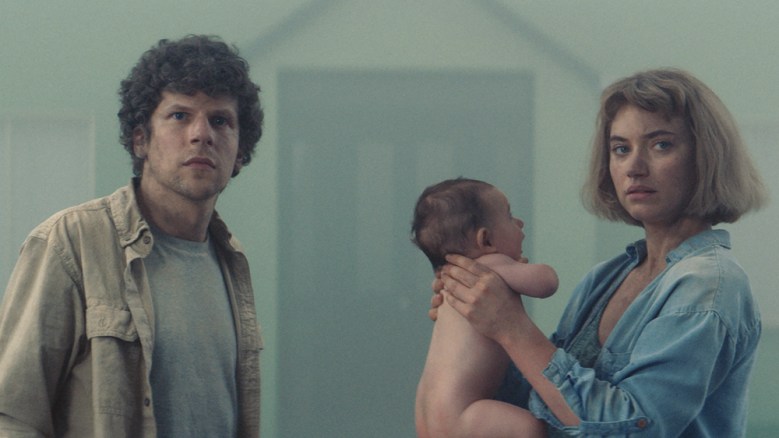 With a nifty premise torn out of “The Twilight Zone” and a superb performance from Imogen Poots, “Vivarium” offers either the sort of horrifying distraction you might need right now, or a shattering window into the darkest parts of yourself you just don’t care to see. In the tradition of the best “Twilight Zone” episodes, how you interpret this clever little B-movie is up to you, and that’s both the fun and the frustration of “Vivarium.”

Gemma (Imogen Poots) and Tom (Jesse Eisenberg, menacing as he comes undone) are a young couple looking to settle down in a new home, but not exactly looking to have children. After a fruitless search to find that perfect place, they meet up with an instantly creepy real-estate salesman, Martin (Jonathan Aris), an automaton straight out of “The Stepford Wives,” to Yonder, a housing tract where all the identical, pale-green starter homes and their white picket fences look copy and pasted on a seemingly endless horizon of astroturf.

Martin leads Gemma and Tom to their new home-to-be in Yonder, “Number 9,” an arbitrary designation given that every other prefabricated house flanking it looks exactly the same, filled with furniture more soulless than the showrooms of IKEA or CB2. (Cinematographer MacGregor and production designer Philip Murphy conjure a candy-colored dreamland from hell.) Gemma and Tom are immediately onto Martin’s creepy wavelength, but go along with what they believe to be a sick joke. “This house is forever,” Martin tells them, an adage stretched to terrifying dimensions once he vanishes, leaving Gemma and Tom alone, and stunned, with no escape from Yonder. Hours of driving in circles yield no way out of an Escherian suburban nightmare that appears to defy the parameters of space and time.

Isolated and seemingly alone in their new eternity, Tom and Gemma are now two characters in search of an exit where there is no exit. To get the attention of whoever put them there, or maybe whoever could save them, they burn Number 9 to the ground, only to find, upon waking soot-covered curbside the next morning, that it’s been completely restored, and they’ve been left with a box of vacuum-sealed food. And there’s another box: inside it, a baby, with a foreboding caveat courtesy of Yonder: “Raise the child and be released.”

As days bleed into months, that child grows up in a blink into a precocious adolescent boy, but he’s no kid, if he’s even human. His throaty, genderless voice oscillates between parroting Martin’s high-pitched speech, and the voices of Tom and Gemma in their manic panic. It’s unsettling stuff. When the kid isn’t screeching bloody murder demanding his corn flakes, he’s glued to the tube, watching disturbing, black-and-white fractal simulations play out on the screen: never-ending patterns of sameness that echo the dire, endlessly repeating prison of Yonder. An increasingly frittered Tom, now at rock bottom, seems to believe the only way out is through the ground, and he toils away his days smoking halved cigarettes while Gemma begins to tacitly accept her new role as “mother.” To say anything about what happens next would suck the grim power out of “Vivarium,” which has plenty of scary, grand guignol tricks up its sleeve in the final act. 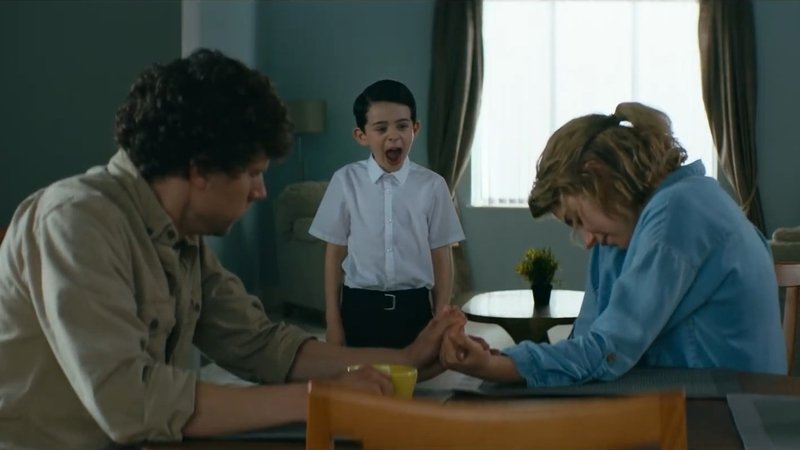 Still, the movie suffers from the malady of many classy new horror films, from the single-location chiller “The Lodge” to the upcoming satanic panic horror “Saint Maud”: A fascinating premise starts to sputter as the movie runs out of juice, even if the search for new ideas is compelling to watch from the start. What is the overarching metaphor here? One of a government leaving its citizens for dead to fend for themselves, or another of the death sentence of dreary suburban life?

Neither is subtle, or an astonishing new wrinkle. But director Lorcan Finnegan’s film still delivers stylish thrills on its own terms, especially in a late sequence (even as the film starts running on empty in the conceptual ideas department) that plunges Gemma down a “Being John Malkovich”-like rabbit hole of alternate, yet concurrent, realities — brain-bending windows into what life for their Yonder neighbors might look like. And it isn’t pretty.

Poots has been shouldering many standout indie films for the past decade, sneaking in unexpected work in “Green Room,” “Knight of Cups,” and “The Art of Self Defense,” recently in the holiday horror remake “Black Christmas” and in a National Theatre Live performance of “Who’s Afraid of Virginia Woolf?” as the dotty and bemused Honey. Poots is neither of those things in “Vivarium,” a showcase for her muscular acting gifts as a woman taking charge in a situation of peril. It’s fascinating to see Poots’ modulations as Gemma is at first petrified in disbelief at, then at the threshold of brainwashed by, her conundrum. Her final come-to as she confronts the reality of awful events makes Poots ideal Final Girl material. “I’m not your fucking mother” is the most badass kiss-off line in any recent horror movie.

But this is 2020, so of course Finnegan and his writer Garret Shanley (with whom he also developed the story) can’t help but slap the film with the most hopeless ending this side of “The Vanishing,” but it doesn’t feel unearned. Instead, you’re reminded of the all-time “Twilight Zone” chillers that left you pondering and unsettled in your living room, questioning how well you knew the people sitting next to you. Given the current state of things, you’ll have to experience “Vivarium” in much the same way.

“Vivarium” is available on VOD and digital beginning Friday, March 27.