From elaborately crafted high concepts to striking portraits of a nation's legacy, these videos made their mark on an already rich art form. 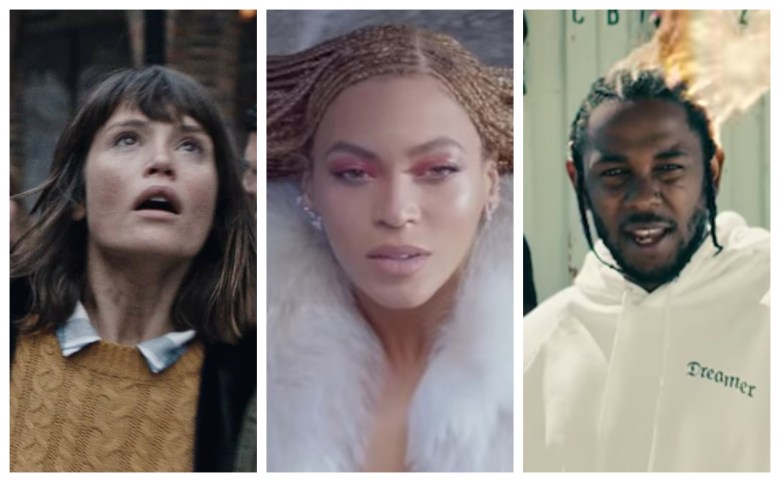 Music videos have long been a proving ground for some of the most innovative filmmaking ideas. Sometimes those breakthroughs come as stylistic flourishes. Other times, it means breaking down a simple story to its purest form.

If the 2000s were the decade when music videos embraced the internet, the 2010s were left to reckon with what the internet became. Over 10 years when viral moments were valuable cultural currency, some videos seemed perfectly tailor-made to create them. Whether manufactured to become a sensation or becoming so by pure chance, music videos embraced the weird spirit and sobering reality of the overall trajectory of the decade.

So, acknowledging that winnowing down all that time and creativity to 25 picks is going to inevitably leave out some worthy contributions, here’s our attempt at highlighting the best of what the art form had to offer:

The 2010s were absurd, so it’s hard not to salute one of the crowning surrealist achievements of the decade: a three-minute ode to a fever dream about being chased by one of the world’s most notable actors, hungry for human flesh. Setting aside the impeccable crafting of the song itself (“Normal Tuesday night/For Shia LaBeouf” is still unassailable, years later), it’s the sheer proscenium-contained scope of this accompanying video that made it really take off. The aerial acrobatics; the massive papier mache heads; The Gay Men’s Chorus of Los Angeles, The West Los Angeles Children’s Choir, and The Argus Quartet treating this as if it were part of the established choral canon; the “Citizen Kane”-inspired cameo at the end: it’s all a blissfully self-aware bit of frivolity made with the utmost care. The best kind of combination, really. —Steve Greene

“Children in a classroom” continued to be a fruitful subgenre in the ’10s (with Scott Cudmore’s video for Fucked Up’s “Queen of Hearts” another worthy addition). But a pair of Mimi Cave’s videos for songs off the duo’s hypnotic debut album took that idea and let it flower in its most elemental form. Along with the equally captivating video for “My Country,” this one for “Bizness” enlists some youngsters to help put the rhythmic trance of the music into a colorful visual form. With Merrill Garbus’ lightning-bolt vocals flowing through schoolkids and setting the backdrop for a choreographed ensemble led by Garbus herself, it’s a potent mixtures of color and shape that feels right at home at recess or a dance studio. —SG

The trio at the heart of this video — Ninian Doff and co-stars Edward Hayes Neary and Adam Jones — would return to apply the same kind of choreographed hallucinations to a very different kind of Cold War-era standoff: Nikita Khrushchev and John F. Kennedy. But it’s this “Dr. No”-esque struggle between villain and his hostage that becomes an even purer match of song and style. Shot through a late-‘60s veneer with accompanying, period-approximating spy movie torture devices, it somehow feels just right when this war of wills becomes its own kind of ballet. Few videos distill the joy of watching someone lip-sync a song — and of letting subtext become text — in quite this way. —SG

Making an entire video inside Google Earth is a good-enough prompt. But there’s a certain way that this video focuses its attention that makes it worth an even closer look. It stays on certain people and the groups surrounding Vince for just long enough to be a meaningful, passing glance at his North Long Beach neighborhood. It’s a hybrid of Google-style surveillance of daily life mixed with an indictment of what that technology can so often overlook. That final “Duck Amuck”-esque pull-out to see just who’s controlling the mouse is one final piece of reframing that makes this far more than a one-trick idea. —SG

Cyriak is likely most famous for being the precursor of weird Twitter with his early animated videos, which typically employed endless Escher-esque recursive images of cows, sheep, or Frankie Valli and the Four Seasons (using a technique called the Droste effect). And while his later music video work, for bands like Bloc Party and Bonobo, showcased an ability to extend these avant-garde After Effects exercises into fully-formed narrative structures, it’s videos like “We Got More” and its spiritual sibling “Cycles,” where Cyriak’s ability to subvert expectations is truly on display, continuously building a version of New York City that wouldn’t seem out of place in the mirror dimension from “Doctor Strange,” and very well may have served as its inspiration. —Leo Garcia

Whether you subscribe to the theory that the 23 doors Thom Yorke walks through in the Paul Thomas Anderson-helmed video for “Daydreaming” represent the 23 years he spent with the mother of his children, Rachel Owens before their separation, or the 23 years Radiohead had been releasing music (1993’s Pablo Honey through 2016’s A Moon Shaped Pool), one thing is certain: Yorke’s endless spectre-like journey is mesmerizing. Despite each space’s distinct color palette/temperature, it all feels of one piece, with each locale beautifully lit and shot, most likely by Anderson himself (as no cinematographer is credited), a trial run, perhaps, for his serving as his own director of photography on “Phantom Thread.” —LG

In a decade where some of the most popular viral hits were comedy shorts Trojan Horse’d as traditional music videos, there’s plenty to choose from. The Lonely Island maintained a presence, Ylvis was a Scandinavian shooting star across the internet skies, and a giant spectral cowboy screlted until his voice box gave out. The non-memeable parts of the video take aim at western tropes, with stunning snow-capped vistas and dusty Main Street faceoffs. But there are few more instantly recognizable symbols of web-borne blissful chaos than Jimmy Barnes’ pained, depths-of-the-soul wordless chorus. As the world warms and words lose their meaning, what better way to encapsulate this decade that someone the size of a mountain just shouting through it? Big enough, indeed. —SG

In the words of directing duo Los Perez themselves: “We wanted to show how the body could become loose and release tension by dancing. The legs of our characters detach from their bodies to escape their boring routines and in the process they become free — they walk, they run, they twist and they dance.” The rhythmic vivisection on display in “Gone” is at once whimsical, haunting, and joyful (and vaguely reminiscent of 1988’s “Wild Wild West” by The Escape Club), and its cavalcade of legs freed from the constraints of their torsos is the kind of arresting imagery that hangs around long after the song’s melody has, well, gone. —LG

Norwegian filmmaker André’ Chocron’s penchant for smooth tracking shots, overcranked slow motion, and extremely curated proscenium tableus have served him well in videos for London Grammar, While You Slept and Sir Paul McCartney, but it’s his work on Cold Mailman’s “My Recurring Dream” that hints that he could follow in the footsteps of the Directors Label artists. The second in a trilogy of videos Chocron directed for the band, “My Recurring Dream” is one of those videos that astounds in its elegance (and potentially elicits envy). A series of beautifully composed tracking shots where each set ups final frame is the first frame of the subsequent scene, the marriage of song and movement is hypnotic, providing just enough variety in both shooting style (time-lapse photography, reversed footage) and subjects (synchronized swimmers, skateboarding businessmen) to never fully lull you into a trance. —LG

There was enough revisiting throughout this decade that it often felt like a sequel to the ‘80s. So it’s oddly fitting that one of the acts that helped shape the late-’80s zeitgeist helped kick off the ‘10s with a return to the beginning. A de facto sequel to “(You Gotta) Fight for Your Right (To Party!),” this follow-up features Elijah Wood, Seth Rogen, and Danny McBride picking up where the original trio left off. Directed by the late great Adam Yauch, the full-circle nature of MCA using plenty of household names to bridge the gap between past and present seemed to presage much of what would come over the next 8 1/2 years. —SG

The most satisfying thing about this pre-”Too Many Cooks” adventure inside the end credits of a movie isn’t just the meta setup. It’s that within this high-concept execution, there are plenty of extra layers that weave their way without really announcing themselves. There’s no one set moment that you realize this will all take place with a giant scroll of names taking up the right-hand side of the screen. When our Marty McFly-jacketed protagonist discovers that those credits are part of his reality, it’s done with enough subtlety that not even he catches on right away. Even the ending isn’t exactly definitive — there’s a sense that something creepy is still hovering right around the corner, regardless of whether or not we get to see it. —SG

Page 1 of 3
Continue Reading: The Best Music Videos of the Decade