Here are some of the most indelible pieces of storytelling from the first six months of the year, whether you've seen the entire series or none of it at all. 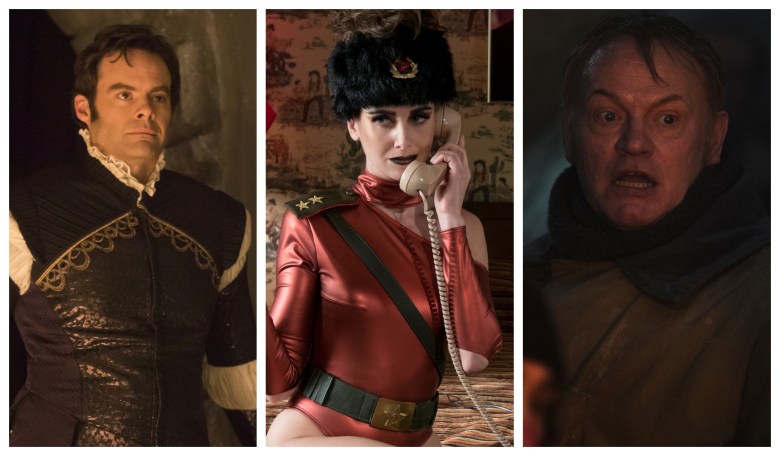 Selecting the best TV episodes of the year is always a complicated process, as singling out an individual half hour or hour (or in some cases 75 minutes) can sometimes seem antithetical to the greater art of TV. If these shows are designed to be experienced as a whole, whether in a single viewing or spread out over weeks and months, what’s the point in picking out smaller sections of the overall unified piece?

The truth is that some of these episodes are self-contained gems that somehow contain all the elements that enrich the stories around them. Other standout episodes are the logical conclusion of countless hours of preparation, the payoff to a promise built over entire seasons.

Whatever the reason, as we soar past the 2018 halfway mark, it’s worth noting some of these focused achievements on an individual level. All the butterflies, stomach churns, and full-body laughs that have made this on-screen year worth watching deserve some added recognition. Much as with our Best Shows of 2018 So Far list, keeping all the calendar year’s notable work to a list that barely scrapes double digits is near impossible. But we still tried.

(Note: In case it’s not clear, the following episode descriptions will contain spoilers for a number of 2018 shows.) 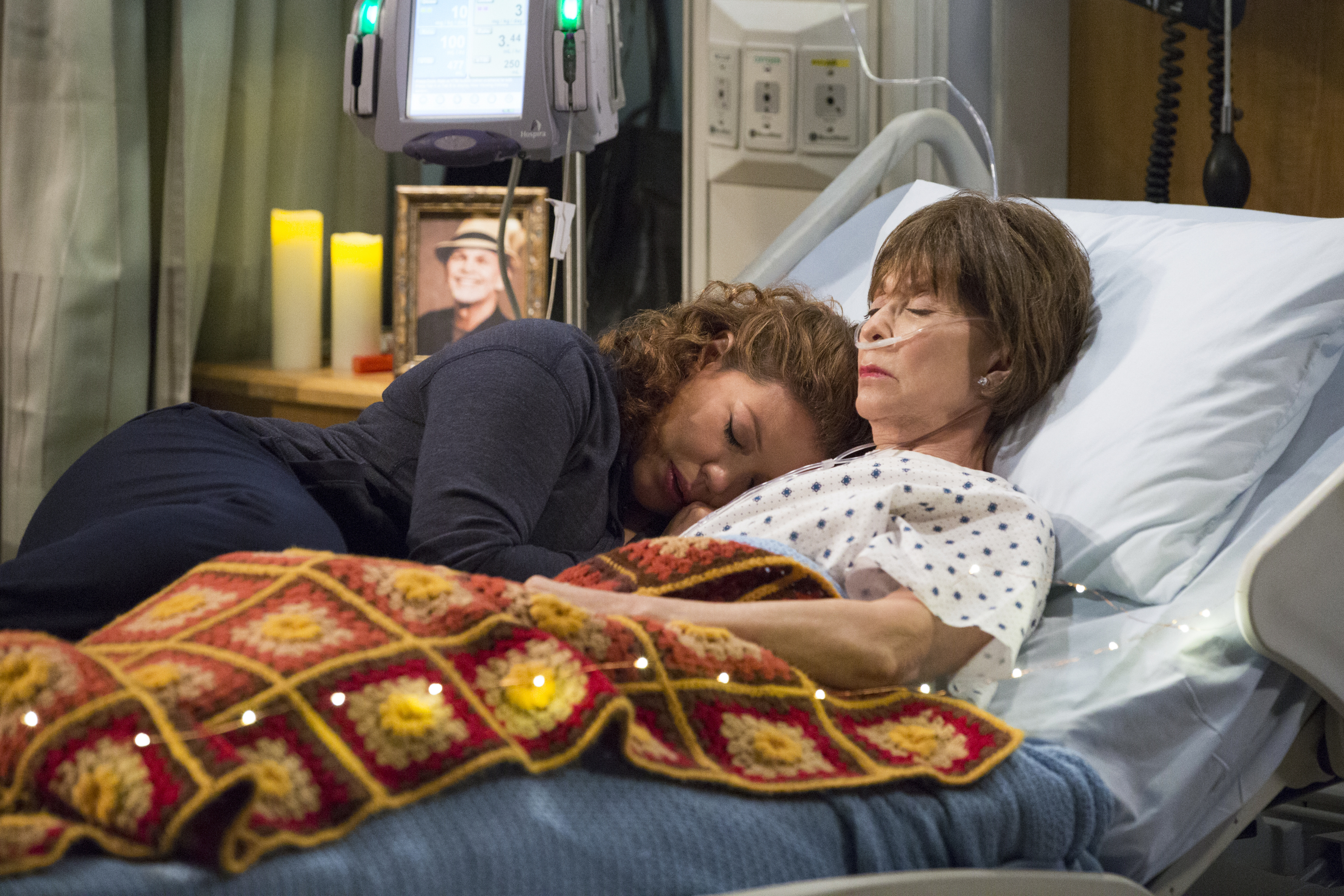 There’s a reason why critics and fans rallied behind this reboot of the Norman Lear classic in its second season. Besides the positive depiction of a vibrant Latinx family in America on TV, the show created a finale episode that brilliantly revealed individual backstories and how they affect these characters today. It’s an affecting episode of television that still maintains a sweetness and optimism. When the family’s abuela Lydia (deserving EGOT winner Rita Moreno) ends up in the hospital for a medical emergency, each of the family members takes a moment to individually talk to her while she’s unresponsive. The capper, an out-of-body experience in which Lydia herself chooses to stay in the land of the living instead of joining her deceased beloved in the next world, is absolutely devastating. The title of the episode says it all about choosing life: “Not Yet.” 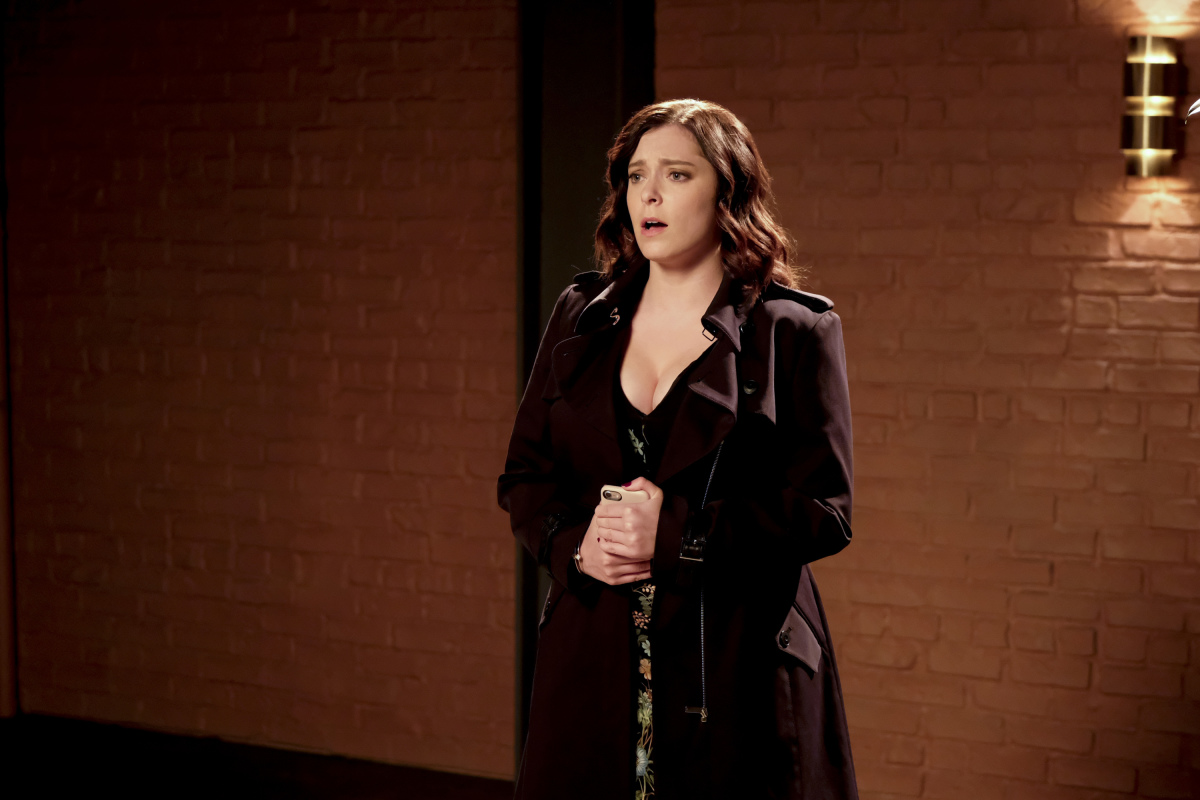 Season 3, Episode 11, “Nathaniel and I Are Just Friends!”

In its third season, this CW series still managed to surprise, whether by embracing some truths about Rebecca Bunch’s (Rachel Bloom) mental health or switching up the format in this gem of an episode. In a beautifully executed and completely unexpected mid-episode time jump, the action fast-forwards eight months: Heather walks behind the bar and then emerges on the other side heavily pregnant with a distended belly. Within the confines of Home Base, we check in with each of the players and learn quickly how their lives have changed (a new girlfriend for Valencia) or stayed stagnant (Rebecca and Nathaniel still having an affair). For such a step to be taken in the middle of the season, much less in the middle of an episode, is crazy (so to speak). But for it to work so well, advancing the various stories that actually create more emotional depth for each character, is remarkable. Throw in some excellent songs (Dr. Akopian’s “Cabaret” moment!) and a gorgeous reprise of “Face Your Fears” and this is television to sing about.

While we’ve praised this BBC America thriller at length, this episode encapsulates the magic of the first season in a heart-stopping ride, propelling the show from merely fun and addictive to must-see TV. The personal nature of Bill’s (David Haig) murder — executed almost as if Villanelle (Jodie Comer) is embracing a lover as she holds Bill’s body tight to her — is the ultimate gauntlet thrown down at Eve’s (Sandra Oh) feet, daring her to reciprocate the dangerous obsession that Villanelle has for her.

The line between sexy and lethal has always been thin on this series, and this episode is no different. When Bill follows Villanelle into a club and she turns to bestow on him a beatific smile, his and the viewers’ blood run cold. With that one expression, she communicates knowledge of his presence and the joy in the anticipation of killing him. Alas, the club is too crowded for him to escape his inevitable death and for Eve to reach her friend in time. As horrifying and heartbreaking the scene is to watch, it’s also breathtaking in how well it’s executed. 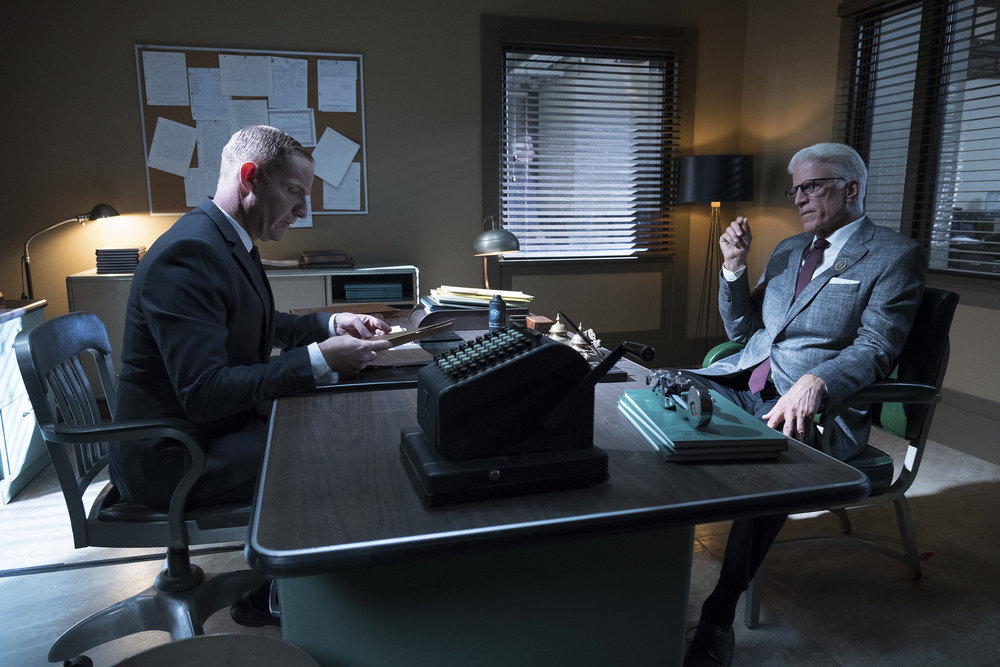 Like so much of Season 2, “Rhonda, Diana, Jake, and Trent” shoves us right into the middle of the ongoing storyline, but our first look at the real Bad Place is laden with amazing details, from the distinctive ’40s-inspired wardrobe to Tahani’s (Jameela Jamil) American accent to every single moment of the Hall of Low-Grade Crappiness. There are so many great lines and smart moments, including Mike Schur’s favorite joke of the season, as the gang tries to navigate their way through crowds of real demons (even a Dax Shepard cameo, which could have been obnoxious, ends up playing as super-cute). And then, that ending — in which Michael (Ted Danson) sacrifices himself to save Eleanor (Kristen Bell) — arrives like an emotional punch to the heart. Michael’s choice is a reminder that “The Good Place” has higher aspirations than just jokes about the afterlife; it’s a comedy about how the best of humanity lurks in us all. 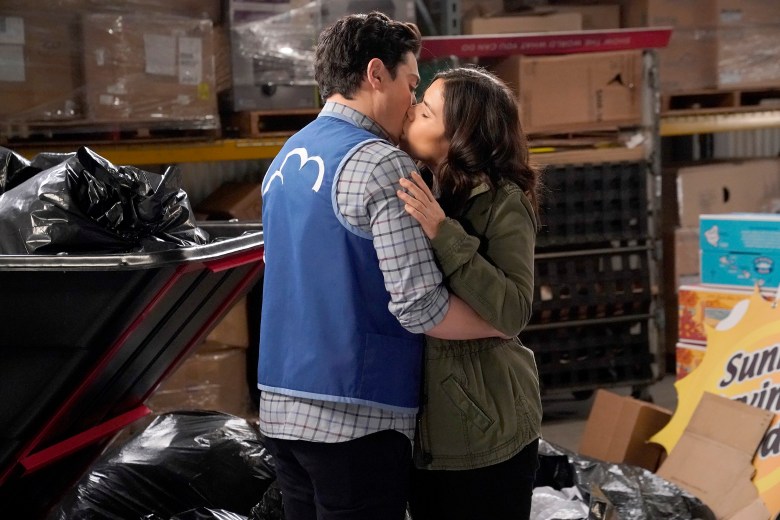 As one of NBC’s recent crop of excellent comedies, “Superstore” is a stealth weapon that superficially seems silly — a group of oddball employees at a Cloud 9 store seem inept at their jobs and life — but still has some of the best pacing and storytelling engines on broadcast. Co-written by Ash (who also stars as the store’s tough gal Dina), half of the episode focuses on the gender reveal party that manager Glenn (the loony Mark McKinney) is holding for his baby that Dina is carrying as a surrogate. And while the hijinks surrounding that unveiling are delightful, it’s the secondary storyline that reveals the genius of the series.

Amy (America Ferrera) learns disturbing news that causes her to reevaluate the lack of initiative she’s shown in her life, and as a result, she lays a kiss on her co-worker and longtime crush Jonah (Ben Feldman). While their will-they-won’t-they relationship has been in play since the first episode, the series has been able to stretch it out in an organic way. This kiss isn’t just the culmination of three seasons of chemistry, but makes sense as part of Amy’s development. Despite some compelling reasons for Amy not to pursue the relationship, this episode still introduced some emotional stakes for both the parties involved and the audience at home. 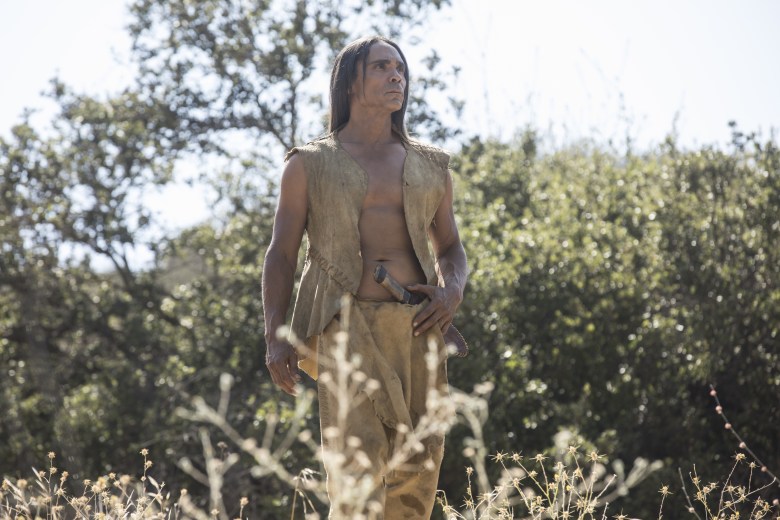 In a way, “Kiksuya” is the opposite of a traditional “Westworld” episode. Focusing on one character and one story, the eighth episode of Season 2 takes a much-needed break from the complicated narrative pushing the rest of the series. Uta Briesewitz’s camera makes time to study Akecheta (Zahn McClarnon) as he explores a westernized, commercialized world that’s taken over his own. He wanders through the shiny steel structures Delos has erected where his ancestors — or who he’s been programmed to believe are his ancestors — used to reside. So much is conveyed about what’s been lost and what’s been gained in these beautiful, unspoken moments, it’s basically antithetical to the long-winded speeches about existence that typically dominate “Westworld.” Yet its final sequence is exactly what creators Jonathan Nolan and Lisa Joy specialize in: twists evoking emotion. What seems extraneous becomes essential; as “Kiksuya” becomes complete, it also elevates the story around it. 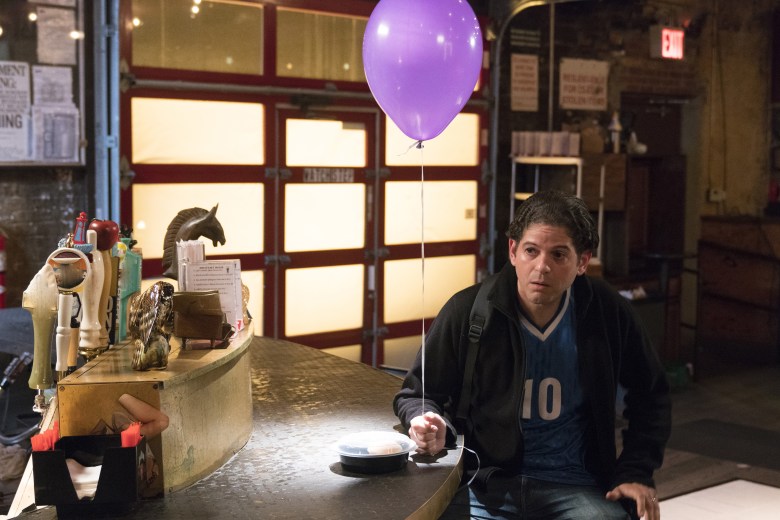 All season long, we were nearly paralyzed by the profound sadness, hilarity, and beauty of New York City as seen through the eyes of “High Maintenance” creators Katja Blichfeld and Ben Sinclair. But the first episode of the year, the first to air in a post-Trump America, did a particularly brilliant job of capturing the terror, anger, and fear of a particularly bad day for the country, and how even at the worst of times, there is still the possibility of finding joy and connection with those around us. It’s a dizzying, almost Altmanesque look at the world that proves the show’s powers as a story about people, not about pot — a perfect reminder of how life is never simple or fair, but still worth living, if only for the moments of loveliness that might come around. 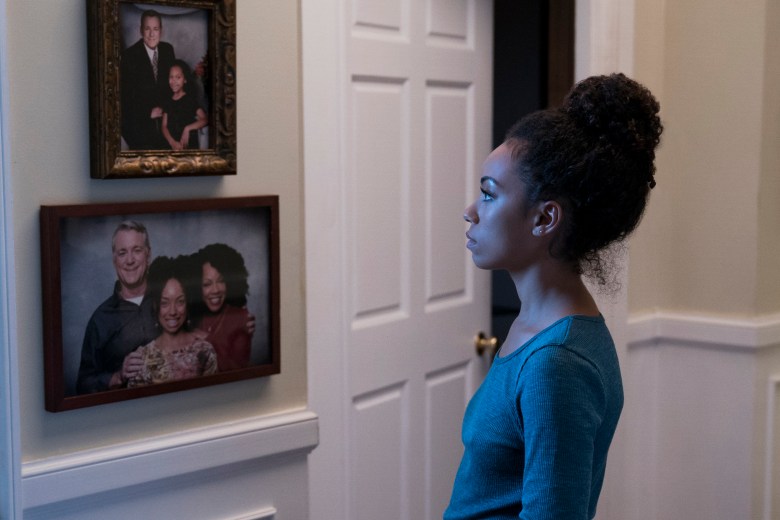 Debates were waged over what episode from the stellar second season of “Dear White People” would make this collection, especially given that “Chapter VIII,” the episode that precedes this one, was a stellar showcase of the show’s talents on a micro level. However, it’s the penultimate episode of the year, in which Sam White (Logan Browning) deals with a family tragedy with the help of her friends Joelle (Ashley Blaine Featherson) and Coco (Antoinette Robertson), where the show reaches an emotional crescendo. If you didn’t ugly-cry at least once during this episode, then the whereabouts of your heart may be unknown. It’s a stunning achievement, brilliantly written by Nastaran Dibai & Yvette Lee Bowser and directed by Janicza Bravo, and one that will stay with us for quite some time.

This Article is related to: Television and tagged Best of 2018