By LaToya Ferguson and Libby Hill 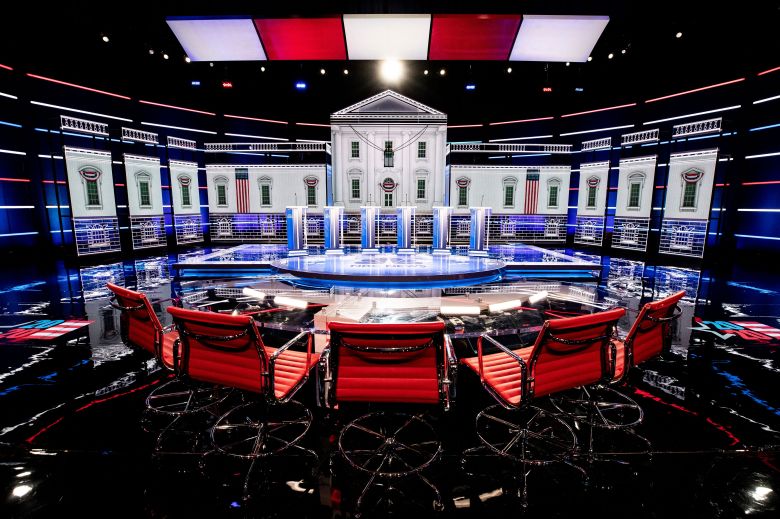 The debate stage in Las Vegas.

The ninth Democratic primary debate airs tonight at 9 p.m. ET/6 p.m. PT, broadcast live from Las Vegas, Nevada, a few days before the Nevada caucuses, which will be held on Saturday, February 22. This debate will be hosted by NBC News, MSNBC, Telemundo, and The Nevada Independent.

The event could prove to be a game-changer in the race, with Michael Bloomberg gracing the debate stage for the first time, thanks to the Democratic National Committee’s tweaking of eligibility rules last month. By removing the requirement that candidates meet a minimum donor threshold (in New Hampshire, that number was 225,000 unique donors), the DNC opened the door for the billionaire, who is self-funding his presidential run.

The former New York mayor has been surging in recent polls, thanks in part to a barrage of inescapable campaign ads. To date, Bloomberg’s campaign has spent more than $300 million on advertising to date, with plans to double that amount by the time Super Tuesday rolls around on March 3.

Six Democratic candidates have qualified to participate in this debate:

To be included in tonight’s debate, a candidate needed to meet either a delegate or polling threshold, as determined by the DNC.

With regards to delegates, a candidate needed at least one delegate from either the Iowa caucuses or New Hampshire primary, while the polling threshold required presidential hopefuls to score 10% in at least four DNC-approved national polls or 12% in two single-state polls in South Carolina – the state hosting the final pre-Super Tuesday primary on February 29 – or Nevada.

Billionaire Tom Steyer and Rep. Tulsi Gabbard (Hawaii) failed to qualified the debate on both the polling threshold and delegate threshold fronts. Since the last debate (on February 7), Sen. Michael Bennet (Colorado), former Massachusetts Gov. Deval Patrick and entrepreneur Andrew Yang have dropped out of the presidential race.

There are a number of opportunities to watch the Democratic debate.

The politics team at NPR.org will also be offering fact checks and live analysis throughout the night.