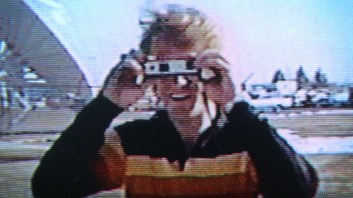 In 1979, KUTV in Salt Lake City acquired a new video camera. Trent Harris, a producer for the station’s offbeat show Extra, ventured out into the parking lot to test the new equipment and happened upon a young man taking pictures of the station’s news helicopter. The kid, calling himself “Groovin’ Gary,” was the self-proclaimed Rich Little of Beaver, Utah. His infectious personality and small-town impressions of John Wayne, Sylvester Stallone, and Barry Manilow piqued Harris’s interest enough so he gave him a business card and asked that he alert him if anything newsworthy happened in his hometown. What happened next would become the foundation for Beaver Trilogy, a unique collection of films that documented Harris’s multiple attempts at re-creating the original magic of the Beaver Kid. [Synopsis courtesy of Sundance Film Festival]