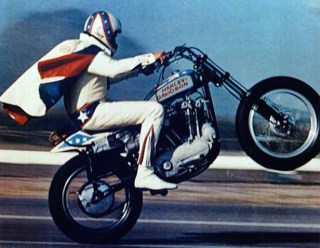 In the history of sports, few names are more recognizable than that of Evel Knievel. Long after the man hung up his famous white leather jumpsuit and rode his Harley into the sunset, his name is still synonymous with the death-defying lifestyle he led. Notoriously brash, bold, and daring, Knievel stared death in the face from the seat of his motorcycle, but few know the larger-than-life story of the boy from Butte, Montana.

After an adolescence riddled with petty thievery and general rabble-rousing, Knievel set his sights on superstardom, a feat he achieved when televisions around the world aired the startling crash footage of his 1967 attempt to jump the fountains at Caesars Palace in Las Vegas. The jump was spectacular, but the failed landing that sent him skidding like a ragdoll across the asphalt was the main attraction. Throughout the 1970s, his legacy as King of the Daredevils spawned action figures, movies, and a generation of kids who wanted to be just like Evel. [Synopsis courtesy of Sundance Film Festival]