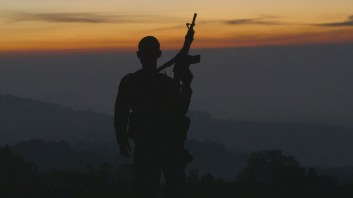 When your government cannot provide basic safety from murderous organized criminals, is it acceptable to take the law into your own hands to protect your family, your land, and your country? That is the question at the heart of Cartel Land, a powerfully visceral journey of two modern-day vigilante movements.

In the Mexican state of Michoacán, Dr. Jose Mireles, a small-town physician known as “El Doctor,” shepherds a citizen uprising against the Knights Templar, the violent drug cartel that has wreaked havoc on the region for years. Meanwhile, in Arizona’s Altar Valley—a narrow, 52-mile-long desert corridor known as Cocaine Alley—Tim “Nailer” Foley, an American veteran, heads a small paramilitary group called Arizona Border Recon, whose goal is to halt Mexico’s drug wars from seeping across our border. [Synopsis courtesy of Sundance Film Festival]