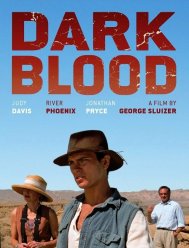 Filmed in 1993 but never completed due to River Phoenix’s death, Dark Blood tells the story of Boy, a young widower living on a nuclear testing site in the desert. Boy is waiting for the end of the world and carves Katchina dolls that supposedly contain magical powers. Boy’s solitude is interrupted when a Hollywood jet-set couple who are travelling across the desert become stranded after their car breaks down. The couple are rescued by Boy, who then holds them prisoner because of his desire for the woman and his ambition to create a better world with her.