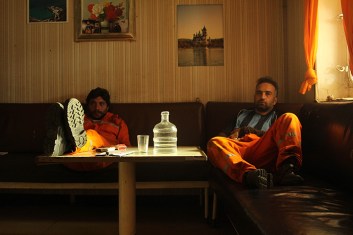 After months without pay, the already disgruntled crew on a Turkish cargo ship arrives in an Egyptian port and learns that the Port Authority is foreclosing on them. Ordered to anchor offshore, the remaining skeleton crew has their passports seized and must maintain the vessel until its owner’s debts are paid. Tensions quickly arise between the authoritarian Cypriot captain, his devoutly religious second-in-command, an affable cook, and a trio of newcomers to the ship—a pair of druggie ne’er-do-wells and the near-mute, hulking Kurd. As months pass, food and entertainment dwindle, alliances shift, and the men take out their raw frustration on one another. [Synopsis courtesy of Sundance Film Festival]