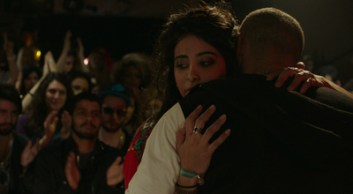 Kareem (Tamer Nafar), a young Palestinian musician, lives in a destitute town a few kilometers east of Tel Aviv, where Arabs and Jews live side-by-side. He spends his days wandering aimlessly between deadend jobs and hanging out with his drug-dealing friends. When his family is struck by unimaginable tragedy, Kareem finds refuge in the world of hip hop. As Kareem’s star potential as “the first Arab rapper” garners attention, his own political consciousness grows and his lyrics become more defiant toward the oppressive political climate. While Kareem tries to find his voice, he and his friends continue to face intense prejudice, and even violence.