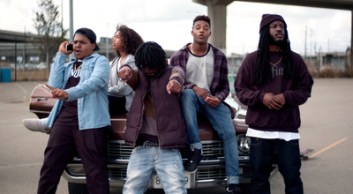 Fifteen-year-old Brandon longs for a pair of the freshest sneakers that money can buy, assuming that merely having them on his feet will help him escape the reality of being poor, neglected by the opposite sex, and picked on by everyone—even his best friends. Working hard to get them, he soon finds that the titular shoes have instead made him a target after they are promptly snatched by local hood Flaco. Seemingly the embodiment of menace, Flaco harbors complexities of his own that will be revealed when Brandon goes on a mission to retrieve his stolen sneakers with his two best friends in tow. [Synopsis courtesy of Tribeca Film Festival]