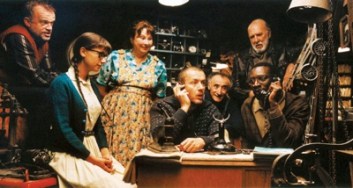 Drawing on one of France’s most popular screen stars, the incorrigible Dany Boon from the comedy megahit Bienvenue chez les Ch’tis, as well as a cast of some of the country’s best-known actors, Jeunet turns on the afterburners in this searing piece of romantic filmmaking set against the storm clouds of warring arms dealers. Boon plays the role of Bazil, a man who was orphaned as a youngster when his soldier father was killed by a roadside bomb. Now working in a video store and trying to find his place in the world, Bazil is hit by a stray bullet in a freak drive-by shooting incident. Emerging from hospital, he finds himself jobless and penniless, but good fortune appears in the form of an ex-con, Tire-Larigot. The ingenious salvage artist ekes out a marginal existence living in a scrap dump together with a tirelessly good-humoured and resourceful group of misfits. Charmed and overwhelmed by the hospitality he receives, Bazil turns the dump into a warm underground home full of magical tools and sculptures made from discarded junk. Meanwhile, an opportunity to get even with the arms manufacturers who killed his father and left him with a bullet in the head keeps Bazil busy plotting sweet revenge. [Synopsis courtesy of TIFF]