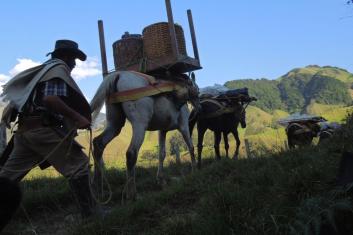 Monte Adentro explores the universe of one of the last muleteer families in Colombia and follows the mule train and lives of two brothers.

Alonso, one of them, now forced to live in a city, attempts to start a new life while accompanying his mother who the doctors won’t allow to return to live in the mountains. Novier, the other brother, still in the mountains of Caldas Province, but now on his own and despite the lack of work, tries to make a living and maintain their old mountain house and the mule driving tradition, as their father and grandfather did. As each of them strives to make a living on their own, memories of their common past make them wish to go back to their origins. [Synopsis courtesy of SXSW Film Festival]