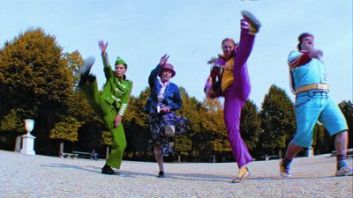 Pepperminta is a playful young woman with an anarchic imagination, determined to free people from their fears through her own special alchemy. Colors are her best friends, strawberries are her pets, and the world outside her door is there to be licked. Together with a plump, shy young man named Werwen and Edna, a gender-bending gardener, Pepperminta sets out on a mission to fight for a more humane world.

Internationally acclaimed visual artist Pipilotti Rist’s first feature, Pepperminta, is an explosion of psychedelic color and fantasy where things sacred and taboo become playful and whimsical, and color can transform and heal lives. Crafting a tactile film seen through a toddler’s-eye camera, Rist irreverently engages with childhood fairy tales to create a magical and visually stunning contemporary fable of courage in the face of shame.

Lobe of Lung: The Saliva Ooze Away to the Underground is a fully immersive version of Rist’s feature film, which invites audiences to lie back and lounge inside the film. The installation can be experienced at New Frontier on Main.