Return of the Atom 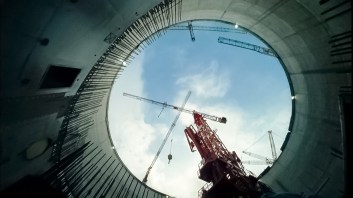 Filmed over the course of more than a decade, this vital new documentary by Mika Taanila and Jussi Eerola examines the now-notorious construction of a nuclear power plant on the remote Finnish island of Olkiluoto — the first nuclear facility to be approved for construction in a Western country following the Chernobyl tragedy in 1986. Announced with triumphant fanfare when the project began in 2004, the plant was supposed to signal the re-emergence of fusion-based plants in Europe, usher in a new, eco-friendly age of nuclear power, and serve as a glorious example of the benefits of public-private partnerships. To put it plainly, things have not exactly worked out that way. [Synopsis courtesy of TIFF]