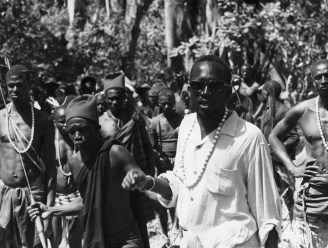 To speak of African cinema is to speak the name of Ousmane Sembene. Known as “the father of African film,” this was no easy title to bear, as shown in this personal essay about one of the world’s greatest artists.

Sembene! takes you from Dakar, Senegal, to the docks of Marseille, France, to New York City. In a career spanning 40 years, Sembene tasted the highs and the lows, only to re-invent himself with a powerful blend of documentary, French New Wave, and Realism, creating films that shocked the sociopolitical power structures of the day. Classics like Xala, Black Girl, and Moolaade established his cinematic vision and made him an international emissary who presented the inner lives of his people on film. [Synopsis courtesy of Sundance Film Festival]