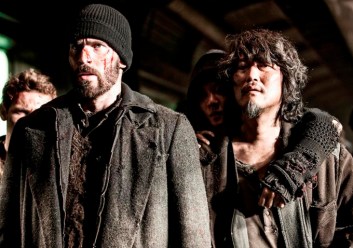 When Bong Joon-ho first opened Jean-Marc Rochette’s comic ‘Snowpiercer’ in a Seoul bookshop, he supposedly devoured all three volumes on the spot. Eight years later, the French comic has been made into the most lavish Korean film of all time, a parable on the final days of humankind. Seolguk-yeolcha describes an impending ice age caused by human hand, whose last survivors are left circling the earth in a nonstop express train. The rich are in the front carriages and the poor – from whose perspective the story is told – at the back.
If you walk along a moving train from back to front, you end up travelling faster than the train itself relative to the Earth. This is the dynamic force upon which Bong’s film thrives: there’s only one direction in which this revolt can go and it’ll be doomed to failure if its speed doesn’t exceed the reaction. With its impressive cast, breath-taking artificial landscapes, fantastic make-up, over-the-top décor, fresh, witty dialogue and a healthy portion of humour, Bong Joon-ho gives back to cinema what the Lumière brothers themselves already used to impress their audiences: the sheer force of the machine. [Synopsis courtesy of Berlinale]