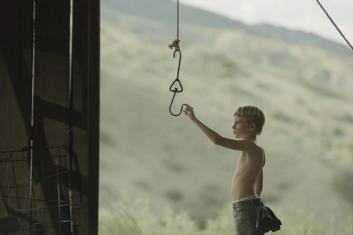 It’s the summer of 1989. 9-year-old Ted Henley (Jared Breeze) and his father John (David Morse) are the proprietors of The Mt. Vista Motel, a crumbling resort buried in the mountains of the American West. Since Ted’s mother left, John has drifted into despondency—leaving Ted to fend for himself. In this isolation, unchecked by the bounds of parenting, Ted’s darker impulses begin to manifest. The arrival of a mysterious drifter, William Colby (Rainn Wilson), captivates young Ted and the two form a unique friendship – setting the stage for Ted’s final, unnerving metamorphosis. [Synopsis courtesy of SXSW Film Festival]