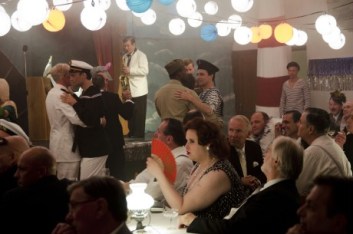 Founded in the early 1940s, the network around the magazine ‘Der Kreis’ (’The Circle’) was the only gay organisation to survive the Nazi regime. It blossomed during the post-war years into an internationally renowned underground club. Legendary masked balls at the Theater am Neumarkt in Zurich provided 800 visitors from all over Europe with a secret and safe space to act out their ‘otherness’ in a self-determined way. It is there that timid teacher Ernst Ostertag falls in love with drag star Röbi Rapp. Ernst searches for a way to fight for his gayness to be accepted as normal outside the boundaries of ‘The Circle’ network without losing his employment as a teacher. Röbi champions the joint fruition of their love. Following a murder in the gay community, violent repression against gay people also endangers ‘The Circle’ network. [Synopsis courtesy of Berlinale]