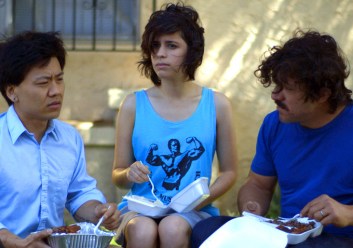 Beef is a beefy Cuban man who believes that he is The Strongest Man in the World. He doesn’t want children, but he wants to tell his grandchildren about his life as The Strongest Man in the World. His best friend is a slight Korean man named Conan. Conan makes him think about things he normally doesn’t think, like the fact that Beef thinks in Spanish, rather than English. Illy, the adopted daughter of a rich art collector, brings out an anxious side in Beef. But it is when his prized possession—a solid gold BMX bicycle—is stolen from him that Beef finds and loses so much more than he thought he could. [Synopsis courtesy of Sundance Film Festival]