They Will Have To Kill Us First 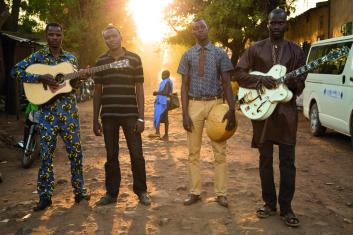 In 2012, jihadists took control of northern Mali. They imposed one of the strictest interpretations of sharia law in history. On August 12th they banned music – radio stations destroyed, instruments burned and musicians facing torture, even death. Overnight, Mali’s most revered members of society – the musicians – were forced into hiding or exile. This film follows Mali’s musicians as they fight to keep music alive in their country. We witness fierce battles between the army and the jihadists, capture life over borders at refugee camps where money and hope are scarce, follow perilous journeys home to war ravaged cities, and for one band, Songhoy Blues, their path to international stardom. [Synopsis courtesy of SXSW Film Festival]