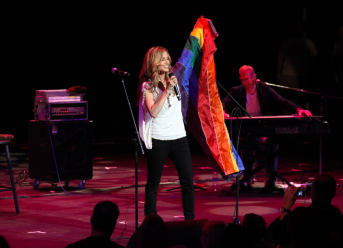 Feature-length documentary Wish Me Away is a personal and intimate look at Chely Wright, the first country music star to come out as gay. After a lifetime of hiding, she shatters cultural and religious stereotypes within Nashville, her conservative heartland family, and most importantly, herself.

Over a three-year period, award-winning filmmakers Bobbie Birleffi and Beverly Kopf followed Chely’s struggle – some of which was recorded on private video diaries – and her unfolding plan to come out publicly. Using interviews with Chely, her family, key players in Nashville and her management team, the film goes deep into Chely’s back story as an established country music star and then forward in verite scenes as she prepares to step into the media glare to reveal that she is gay.

Finally, the film chronicles the aftermath of that decision in Nashville, her hometown and within the LGBT community.

Wish Me Away shows both the devastation of her own internalized homophobia, which led to Chely putting a gun in her mouth, and the transformational power of living an authentic life. It shows the struggles of being a Christian who happens to be gay, even within her own family. And it reveals how “Don’t Ask Don’t Tell” has found its way into the culture of Nashville. [Synopsis courtesy of official site]