Audiences know the Ryan Murphy aesthetic. The showrunner and television impresario has created a universe that blends glitz and glamour with a heavy dose of camp, and that is often best exemplified in the work done by his costume designer and producer Lou Eyrich. Murphy and Eyrich are a package deal, having consistently worked together on nearly every Murphy project since the 1999 teen series “Popular.”

When describing his first meeting with Eyrich to IndieWire, Ryan Murphy said the two “kind of clicked immediately.” Murphy is meticulous about the design of his shows, especially with regards to costumes and production design and upon first meeting Eyrich, “she knew all my references. And if she didn’t know them she would quickly become a student of them.” It’s a synchronicity that nearly every one of Murphy’s collaborators and stars noticed.

“Lou is an extraordinary interpreter of Ryan’s vision,” actress Sarah Paulson told IndieWire. “Ryan knows exactly what he wants down to the description of the color.” The “American Horror Story” actress said Eyrich has the ability to hear anything from Murphy, right down to the director describing a specific photograph and Eyrich automatically knows what it is. “He [Ryan] will describe [something] in a way and Lou will take it, interpret it, elevate it, put it on you, make it extraordinarily wearable, [like] it was something you were born in.” Murphy called Eyrich a “hunter,” one who can take Murphy’s desire to put Broadway legend Patti LuPone in a “turban with an ostrich feather in chocolate brown” and find the exact item he’s looking for.

Paulson says Eyrich also knows Murphy’s insights as a visual person. When it comes to fittings, Eyrich will often take pictures of the characters in costume and then color correct them to show Murphy exactly how it looks in that specific color. “She never shows him anything half-done, even though it can’t be done because it’s the first fitting,” Paulson said. So Eyrich will crop, edit out safety pins, and do whatever possible to give Murphy the best visual of the costume being formed in the moment. “Ryan, who is so busy and has so many irons in the fire…extra chaos and noise doesn’t help him,” Paulson said. “Lou knows all that instinctually and wipes all of that clean.”

It’s certainly rare for a costumer to become synonymous with a showrunner, but as Murphy said, “she’s one of the few people in my life I have absolute trust in.” And that trust has been rewarded, with Murphy going above and beyond having Eyrich just design the costumes for his show. In 2018, Murphy made the five-time Emmy-winning costumer a producer on “American Crime Story” and it’s a position she’s held on every Murphy project since. For Murphy, it just made sense to promote Eyrich as she’s been with him from the beginning. “Hollywood still, in many ways, is a boys club,” Murphy said, and women often pigeonholed as little more than “maternal creatives” still lacking in power.

Murphy explains that Eyrich is already involved in nearly every facet of production, working 18 hour days to not only settle on the show’s aesthetic but also helping to cast. “I wanted her to feel that we were making something she also had an ownership stake in because she deserves that,” Murphy said. He understands it’s a rarity and that some might be taken aback by his promotion of below-the-line collaborators, but it brings both a sense of pride and efficiency. “I don’t direct all of [the episodes], so I wanted her to be able to feel that when she walked [on]to that set when I wasn’t there that she had more power than almost anybody there, so that she felt protected enough to be creative and vulnerable.”

In the case of “Hollywood,” this need to delegate was essential due to a truncated shoot and both Eyrich and Murphy pulling double duty, filming the series simultaneously with the film adaptation of the 2016 Broadway musical “The Prom.” For Sarah Evelyn, the co-costume designer on “Hollywood,” the established shorthand between Murphy and Eyrich helped keep things moving quickly because there was no need for anyone to get their bearings.

And once filming started up, though Eyrich was unavailable on a day-to-day basis, she became a fierce advocate for those working on the series. Evelyn said Eyrich was able to get things approved quicker because she was a producer. “Sometimes you really just need to design, and you need your supervisor to be hiring staff, and you need to be the one going to the producer saying, ‘Hey, we do need this money. I can vouch for it,” and that’s what Eyrich does.

On top of that, Eyrich was available to help the designers, even after working a hard day. “If you’re like me and it’s eleven at night and I’m still here bedazzling this thing she’ll [Lou] be like ‘want me to come over? I love bedazzling!'” As film and television production get grander, Evelyn said it’s now essential to have a producer in a specific department “that is on your side [and] that understands exactly what a department needs to get something done.”

For Paulson, working with Eyrich helped her fully inhabit whatever character she’s playing, whether it’s the junkie ghost Sally McKenna in “American Horror Story: Hotel” or, in their most recent team-up, Nurse Mildred Ratched in the upcoming Netflix series “Ratched.” Murphy said he and Eyrich start every new series with frank conversation about “what is the color of the show” in order to have color determine the feeling Murphy tries to evoke. In the case of “Hollywood,” Murphy realized he’d never worked on a series that had a lot of golds and browns in it, while for “Ratched” the color was green.

And declaring the color of a show green is far more complex than expected. Paulson equated Murphy’s color rules as similar to Miranda Priestley’s (Meryl Streep) speech on cerulean blue in “The Devil Wears Prada.” Eyrich didn’t just bring in swatches of different types of green; she also had to differentiate the color from what Paulson’s Mildred Ratched to Judy Davis’ Nurse Bucket, so that both actresses were wearing green in different shades. Eyrich was also particular about little nuances of color and costume that would set up who the characters were, from “the sleeve length, and the way the collar was pointed, to the way the belts sat,” said Paulson.

The actress said she never felt as if she’s wearing a costume, and in many ways Eyrich helped the actor find their character within the costume. Paulson described Eyrich’s fitting process as one involving period specific music and candles. In the case of her role as Sally in “American Horror Story: Hotel,” Eyrich helped Paulson find the right stockings that would convey the character’s grungy personality: “I’m wearing Sally’s stockings…and that’s a magical thing.”

But with a specific aesthetic often comes challenges that, once again, Eyrich is there to provide encouragement and support. On “Hollywood,” Evelyn said, there was a large number of background performers to outfit for the finale at the Academy Awards. The principal cast already had been outfitted with several custom-made pieces — only for Murphy to decide that he wanted to change the color palette to something more pastel-based and dreamlike.

Evelyn was flustered, wondering how she was going to make it happen. “That’s where you call Lou, have your cry, have your laugh, [and] get back on the horse.” Evelyn says it’s all about following Eyrich’s advice which is “grace under pressure, there’s always a solution, [and] if it’s horrible, laugh.”

“[Lou] speaks Ryan Murphy,” Paulson said, and at the end of the day that’s what’s made not just their partnership successful but the shows they’ve created. Murphy said it often happens that big stars will attempt to steal her away, which he refuses to let happen, and it’s easy to see why. Eyrich is able to work with any time period, collaborate with pieces already designed or make things from scratch. Murphy said: “There’s nothing that you can’t throw at her.” –Kristen Lopez 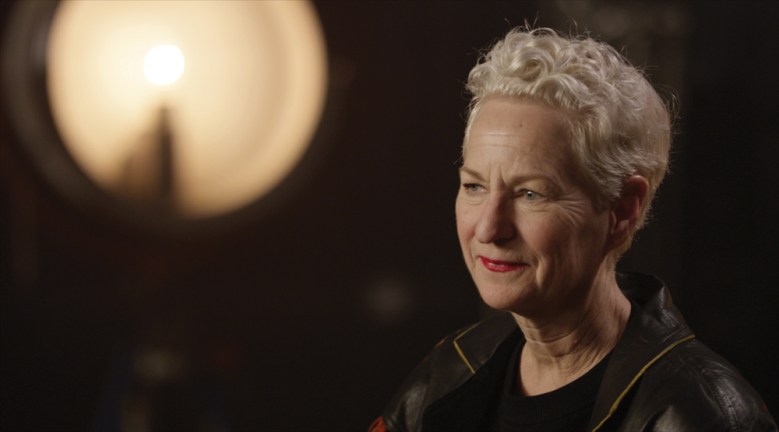