When Joslyn Barnes first met Danny Glover, she did not anticipate that together they would produce some of the most consequential and exciting documentaries of the 21st century. “I just thought, ‘Wow, this is the actor from ‘Lethal Weapon,’” Barnes said in an interview with IndieWire. “‘How amazing that he’s here.’ And then we started talking.”

That was over 20 years ago, on the Dakar set of filmmaker Cheick Oumar Sissoko’s “Bàttu,” which Barnes, at the time an upstart screenwriter, had adapted from Aminata Sow Fall’s novel. Glover was helping elevate the profile of the production by cameoing as a corrupt government minister. In the process, he and Barnes discovered a kinship for underrepresented voices in filmmaking, which would eventually lead them to co-found Louverture Films in 2005.

“I realized he was this walking encyclopedia of world cinema, and he knew a lot of the films and filmmakers I admired,” Barnes said. “We weren’t seeing the perspectives from the Global South or the communities that have been marginalized in the U.S. sufficiently onscreen, and we realized that this was due to a structural problem in the marketplace.”

More than 15 years later, the company has developed a foolproof track record for ushering adventurous and timely cinema to widespread acclaim. The duo are not your average wheeling-and-dealing producers: While Glover leverages his long-standing activism to support challenging work, Barnes gets her hands dirty with the process, blending academic fervor with radical aesthetics.

At a time when the documentary landscape is dominated by accessible hits, Louverture’s productions provide a bracing alternative that push the non-fiction form forward. “Danny was very determined to address who gets to tell which stories,” Barnes said. “We decide which projects we make, we’re really conscious of what it is we’re trying to do.”

The company launched in 2005 with Abderrahmane Sissako’s daring “Bamako,” an audacious look at the African debt crisis that put the World Bank on trial. It was an early indication of their documentary ambitions. ”There’s a certain hybridity to it,” Barnes said.

However, their first documentary was directors Tia Lessin and Carl Deal’s “Trouble the Water,” which followed rap artist Kimberly Rivers Roberts and her family in the aftermath of Hurricane Katrina through her own footage. It landed an Oscar nomination in 2008. Other Louverture productions that have garnered acclaim since then include the archival effort “The Black Power Mixtape 1967-1975” and two other Oscar nominees, “Strong Island” and “Hale County This Morning, This Evening.”

Collectively, these films represent a significant challenge to a risk-averse marketplace in terms of form and content alike: They enable marginalized stories to take shape in bold, challenging ways that galvanize audiences and launch careers. For Glover, who grew up in San Francisco in the ’50s and ’60s, the focus on underrepresented perspectives is a direct extension of his upbringing. “I’m unapologetically a child of the Civil Rights Movement,” he said. “The first thing you ask yourself is, ‘Who are these people? What is the value they see in themselves?’”

When Louveture launched, it secured additional support from partners Susan Rockefeller, Sawsan Asfari, and Tony Tabatznik. Since then, the team has grown alongside the company’s ambitions, which juggle fiction and non-fiction alike, though they keep their overhead small. “There’s a lot of people who’ve gone the route of what I call the sausage factory,” Barnes said. “They set up a company, become the destination for the streamers, take a huge overhead fee, hire other producers and crew, pay them less, let them execute, and then go on to the next one. I understand the business model. It’s a very smart business model. It’s not the model that we chose.”

However, she was was practical about the challenges of keeping the company alive. “We always have to be mindful that we need to recoup and make money to survive as a company,” she said.

Louverture’s narrative roster includes everything from Thai auteur Apichatpong Weerasethakul’s “Cemetery of Splendor” and the recent “Memoria” to Lucrecia Martel’s “Zama.” But the company’s biggest impact has been its ability to develop challenging non-fiction projects that bigger production outfits might reject outright. That’s partly because the company doesn’t shy away from addressing the disparity in cultural representation that afflicts the medium itself.

“We always understood that narrative has served to justify oppression,” Barnes said. “We know that the history of documentary specifically was an instrument of the colonizing project. How we become self-aware of our own interactions in our own communities and also venture out from them? That became really important.”

Glover added that many of the projects allow their subjects to adopt a universal quality. “Strong Island” makes the shooting death of an unarmed Black man — the brother of filmmaker Yance Ford — into a powerful family drama. “Hale County This Morning, This Evening” turns the lives of Black residents in its eponymous setting into an intimate immersion in everyday life. “It’s an amazing revelation when people can say, wherever they are, ‘I know that story,’” Glover said. “We’re able to trust the narrative in such a way that allows us to be open to the other unscripted part of life.”

Watch how producers Joslyn Barnes and Danny Glover helped shape the story of Yance Ford’s “Strong Island” in the video below.

Barnes has developed a knack for sorting out important projects that could use some help. When “Strong Island” came her way, Ford had yet to insert himself into the narrative, and his three-hour cut was struggling to find the cohesion it needed. The producer introduced Ford to the writer Walter Benjamin, who wrote extensively about the parameters of storytelling in a way that led the filmmaker to understand the value of a more experimental and personal approach. “Joslyn saw what I was striving for,” Ford said. “Her response to it was not to try and change the way I was trying to achieve it, but to help me come up with other narrative approaches to get to this intangible point that I needed in order for the film to be complete.”

Ford, who would go on to be the first openly trans director nominated for an Oscar, also met separately with Glover at a hotel in Los Angeles. Ford said that even as onlookers frequently interrupted their conversation to speak to the celebrity, he was continually engaged with the topic at hand. “I was able to talk to Danny about the importance of getting my father as a character right in the film, making sure that even in his absence he was a fully realized character,” Ford said. “We have only a handful of African Americans in the documentary field. Danny is the most genuine, generous person who happens to be extremely famous that you would ever want to meet.”

In the wake of that achievement, “Hale County This Morning, This Evening” cemented Louverture’s ability to propel non-linear documentary storytelling to wider acclaim. Barnes said the movie’s warm, intimate connection to its subjects was a challenge to the precedents set for Black narratives in America. “The approach to the film comes as much from the failures of American cinema to iterate the experience of Black consciousness as it does from a deep potential to do so,” Ross said. “African American directors have worked so much and have been burdened by the struggle narrative. The culture has had to work its way out of a dangerous history in film and photography, which has been marred by misrepresentation and oversimplification.”

The activist bent of Louverture isn’t limited to projects from people of color. Last year, the company co-produced “Gunda,” Russian director Victor Kossakovsky’s black-and-white portrait of a pig mother that forces viewers to contemplate her intelligence. “I became vegan during the course of making this film,” Barnes said. “He actually shifted my moral universe.”

These days, Barnes said she was skeptical about the impact of large streaming entities on the documentary market, despite the influx of resources, because of the way the material was being presented to audiences. “The problem with algorithms is that it’s creating further segregation,” she said. “When that extends to the news, corporations, and governments, they can not only predict your choices, but also re-engineer your feelings.”

At 75, Glover still marvels at his trajectory, and said that his late career role as a producer has brought him back to his roots. “I always thought I would work in some sort of community service, or something like that,” he said. “But I feel like I’m doing that with the work that we do at Louverture Films. We empower communities.”

Barnes was adamant that they continue to avoid safe commercial bets. “We have to elevate the field and not just adjust to the market,” she said. “We have to create the audience we want to see. That audience is out there.” —Eric Kohn

Influencers: How do you turn the experience of therapy into empathetic TV? It took Josh Kriegman, Elyse Steinberg, and Eli Despres years to figure out their incredible show.

Influencers: The director and producer behind "Rand University," "Baltimore Boys," and more has grown — and grown with — ESPN’s flagship series. 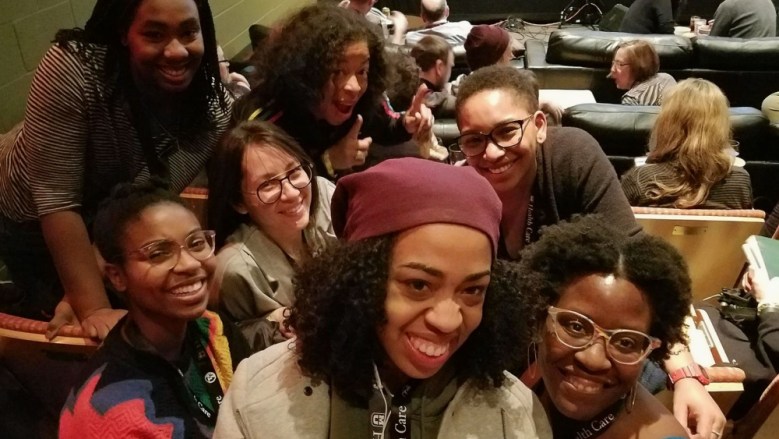