The history of television has been defined by the medium’s great dialogue writers. The cadence, the wit, and rhythms of characters’ banter is a distinctive trademark of the medium’s best storytellers. As American TV has evolved from being something you need to watch as carefully as you listen to, it has been rewarding to witness one of those master dialogists, Amy Sherman-Palladino, transform the rhythms of her words into filmmaking.

Sherman-Palladino is a former dancer, and that is how she thinks of herself as both a writer and director, with Amazon Prime Video’s “The Marvelous Mrs. Maisel” being a project conceived of in motion.

“We’re doing a story about a woman [Rachel Brosnahan] whose life explodes. Midge is learning all about life, [and] we’re going through it with her,” Sherman-Palladino said. “Her life is about motion and moving forward and she’s not willing to stand still, and because of that the show just took on this sort of life of nobody stands still. Everybody just keeps moving, moving, moving, and we just fell into the crew to do it. We have [Jim] McConkey, this incredible Steadicam guy who can do it.”

The evolution from “Gilmore Girls” to “Mrs. Maisel” is a combination of a streamer (Amazon) willing to fund a prestige production, a special collaboration of a showrunner and a camera operator (McConkey), and a technology (Steadicam) in a moment of great evolution. It’s an alchemy that hasn’t just pushed the vision of a TV creator forward, but the artform of camera movement itself.

Dating back to the “Gilmore Girls,” Sherman-Palladino and her co-creator and husband Dan Palladino rejected normal TV coverage, choosing to shoot long walk-and-talk masters that rely actors’ performance to propel the speed and rat-and-tat dialouge. With the resources to have a full-time Steadicam operator at their disposal, the two co-creators would learn they could push their reliance on masters further.

“Normally when you follow a character into a group shot and it’s static, you’d have to stop and stay there, probably cut,” Jim McConkey said. “I remember early on Season 1 [on ‘Maisel’] getting to this group shot and I saw how Tony [Shalhoub] was turning and Marin [Hinkle] was turning and Rachel was turning – it was a side conversation – and I would start to do a slow dance move during the take. At first Amy said, ‘Oh, you think you can move during that?’ It was kind of interesting because I think she discovered that maybe you don’t need to cover all that if the camera is still enveloping the characters and you’re moving.”

Steadicam was not simply as technological means-to-the end, but became an extension of Sherman-Palladino’s ballet. “What [Steadicam] really is, is it’s music. It is an instrument, and a great Steadicam operator has music in them and they feel the music,” Sherman-Palladino said. “And [McConkey] feels it, and what he can do when he just goes is extraordinary. We exploit everything that he’s got in him.”

During Season 1, Jim had started to experiment with the Betz Wave, an invention by Christain Betz that, when added to the top of a Steadicam, made it significantly easier for an operator to maintain a level composition. According to McConkey, prior to the Betz Wave, a larger part of his concentration was on maintaining his composition, but the new technology allowed him to focus more on movement. He became faster and bolder in how he followed action; meanwhile the camera movement itself had more of a weight and sharpness to it.

“Amy started seeing the Steadicam shots that all of a sudden look like dolly shots, you couldn’t really tell the difference,” Jim said. “She just thought, “Well, why do we have to stop?”

Behind the scenes of “The Marvelous Mrs. Maisel”

Sherman-Palladino became emboldened, never wanting to cut. She would play music on set to establish the rhythm she wanted. She and Jim developed a physical collaboration, where she’d put her hands on him to position and glide him until they found the right movement. And the shots became more elaborate, requiring experimentation, weeks of pre-planning, and often technical invention. It was at this point Jim’s older brother Larry became an integral part of the “Maisel” team.

Ten years Jim’s senior, Larry was an early pioneer of Steadicam. He worked with directors like Brain De Palma, Luc Besson, and yes, Martin Scorsese — “Maisel” was not the first time Larry would help design a long Steadicam shot through the Copacabana (“Goodfellas”) — who took advantage of Garrett Brown’s game-changing invention and developed a new cinematic language.

In the late ’80s, while still studying classics in archeology at Cornell University, Jim got paid to be PA for Larry on a musical documentary about Sonny Rollins. He was hooked. He rose through the ranks learning to change mags and pull-focus for Larry until he became top operator himself.

Productions can never have enough money or room for two A-level Steadicam operators, so the brothers never worked together until the CBS procedural “Blue Bloods.” Jim had reached a point where he wanted to stay closer to home to be with his kids, so he took a job on the network series rather than have to leave town for a feature. In his second year on the busy 22-episode a season show, they needed a second Steadicam op, and the two brothers were professionally reunited, sharing an apartment near set and traveling to work together. It was a newfound collaboration that grew into their work together on “Maisel.”

As Sherman-Palladino’s camera movements became more elaborate, sometimes requiring multiple operators, Larry would come to set, but his real role was problem solving. For the more complicated shots, Jim would scout and send specs to Larry, who would build technical solutions in his backyard workshop.

While working with Besson on “Lucy,” Larry started to experiment with the Movi, a camera stabilizer that uses gimbal technology. “As soon as I got a Movi, I knew I wanted to be able to do more with it,” Larry said. “I started developing ways of making hybrid versions of a Steadicam.”

Working with Freestyle on software, inventing magnetic release rigs, combining harness vests with a mini-crane arm (the McConkey “Wonder Stick” was put to use on “Maisel” Season 3), Larry became obsessed with how to achieve new, previously impossible movements by combining and sometimes handing-off-between different devices.

The first big test came during Episode 4 of Season 1, where the camera swoops down off the stage at the Copacabana on a crane and is seamlessly released into a handheld Movi shot that follows a waiter across the venue. (You can watch this scene in the video below.) The McConkeys remember the nerves on the set that day as it took time to get the shot right, and there was concern if it could ultimately be executed.

“I think based on how we started shooting the first season, she and Dan both changed their concepts of what they thought was possible,” Larry said, as he describes a Season 3 shot where the camera follows Midge as she enters the Fontainebleau, but then rises up into the air, turns, and comes back down to pick up the actress to follow her through the lobby. Larry operated the crane wheels, Jim used the Movi — the two brothers working in unison on a shot that involved two different crews and two cranes. (You can also watch this scene in the video below.)

“We are now at a point in technology where we’re able to start to do things we couldn’t a few years ago,” Jim said. “Amy and Dan are advancing the art of cinematography, even though they’re not cinematographers. She’s pushing it.” 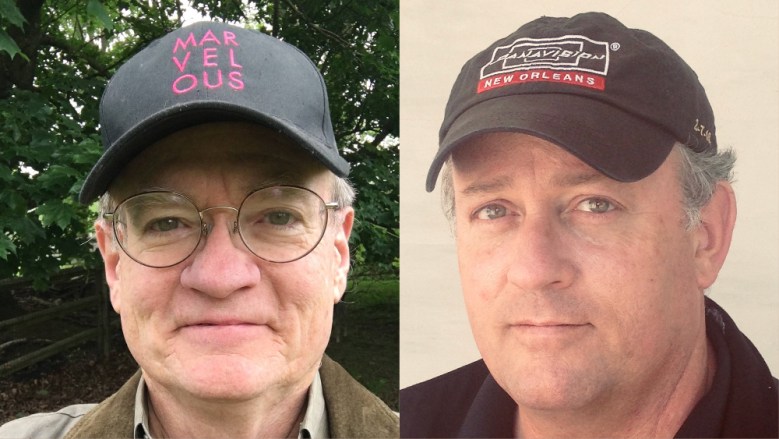