Cinematography this century has moved in three distinct directions: desaturation, unlit, and a looser (handheld) and more floating (gimble) camera movement. And then there’s the style of Robert Richardson, who continued to shoot films with bold colors, a strong overhead light that pushed pockets of the celluloid to the edge of exposure, and a precise camera that moves with conviction. Every inch of his considerable technical prowess front and center.

After playing a key roll in delivering the intentionally over-the-top visual excess of “Casino,” and the swirling disorientation of “Bringing Out the Dead,” Martin Scorsese recognized Richardson as the perfect conduit to the “movie” phase of his career that would follow. Richardson’s ability to precisely dial-in to each of a director’s wide array of camera movements had never been more evident, from the sweeping playfulness of “Hugo,” to the high flying mania of Howard Hughes in “The Aviator,” to the angular paranoia of “Shutter Island.” With his seamless collaboration with production designer Dante Ferretti and special effects guru Rob Legato, Richardson brought literal movie-magic to life in “The Aviator” and “Hugo,” while picking up Oscar number two and three.

Quentin Tarantino’s films, unlike Scorsese’s, don’t just visit, but live in the realm of “the movies.” And after his third film, “Jackie Brown,” Tarantino was getting ready to exit, for the first time, the confines of Los Angeles to enter new story worlds. The pairing of director and cinematographer could not have happened at a better time.

With the multiple martial arts sub-genre palettes of “Kill Bill” — a film originally conceived as having four different composers and two different cinematographers to embody and maintain its various styles — it became apparent what Richardson would mean for Tarantino. They choreographed playful, violent, rapid camera movement every bit as perfectly executed as the fights themselves. Not only did the rich color and texture of the cinematography Richardson supplied give a bold visual connective tissue from pulpy ‘70s samurai to the Shaw Brothers kung fu to Japanese Anime to Spaghetti Western, but made them feel part of a greater visual whole, a Tarantino whole, that went beyond the auteur’s distinctive writing.

“The goal isn’t just to make the movie that’s in my head, the movie that’s in my head is the starting point, if we fail completely we get that, but that’s the launch pad. And then I bring great artists and craftsman together and then they expand on it and that’s the paint box,” Tarantino told IndieWire. “[Bob’s] led my films to a visual sophistication that, back when I was working at the video store, I couldn’t even dream of achieving myself, but I could appreciate in others.”

Their following three films found Tarantino creating inside distinct “period film” settings: Nazi-occupied France (“Inglorious Basterds”), the Antebellum South (“Django Unchained”), and 1877 Wyoming in the dead of winter (“The Hateful Eight”). Richardson would find punchy, exciting looks for each that avoided the period-filmmaking games of modern movies, while supplying a production value and craft that exceeded the b-movies they were inspired by (and sometimes referenced). The art of revisionism had never looked so good.

It would be a harder needle to thread when Tarantino would return to Los Angeles for the first time in 20 years to more faithfully recreate the nearer-past of the summer of 1969 in “Once Upon a Time in Hollywood.”

“We didn’t want to look at movies from the last 30 years that tried to recreate the 60s, I would have killed myself if it looked like one of those movies,” Tarantino told IndieWire. “Something I had in the back of my mind was maybe even shooting the film in black and white because that would be different. I was never going to do it because that’s not how I saw it in my head, but as a way to combat ugly costumes was to drain those paisley colors away, and well, I’d never seen that before, that could actually really be kind of cool.”

What Richardson and Tarantino found resulted in Richardson’s most subtle, yet luminous work, with an exciting black and white western, “Lancer,” mixed in. A type of richness only possible in celluloid, Tarantino couldn’t stop smiling throughout watching dailies the first few weeks. He now saw the full potential of his movie. —Chris O’Falt

Credits: "Casino," "The Aviator," "Inglourious Basterds," "Hugo," "Django Unchained," "The Hateful Eight," "Once Upon a Time in Hollywood" 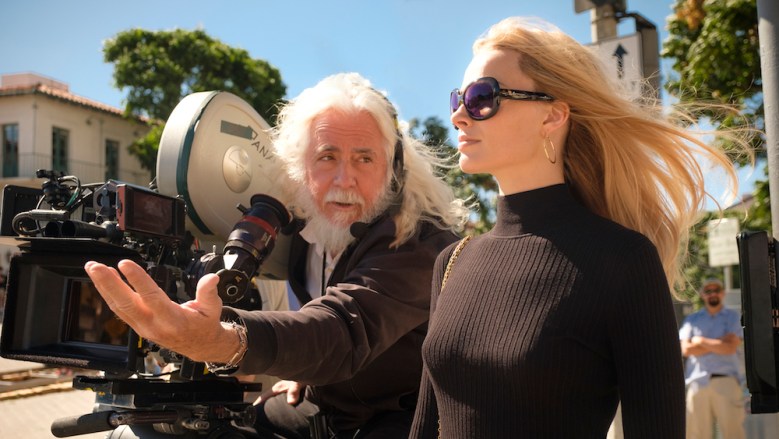 With Robert Richardson, It's 'So in the Bag'