It’s no surprise that director/animator Genndy Tartakovsky has become the cinematic leader of 2D TV animation. Going against the grain of the great dialogue-driven, comedic animation that dominates TV (“BoJack Horseman,” “Archer,” “Rick and Morty”), Tartakovsky has instead offered bold visual storytelling that borrows heavily from movies and comics. Indeed, with both his Emmy-winning “Samurai Jack” and current Adult Swim series, “Primal,” the Russian émigré has achieved a masterful minimalism that is rare for TV. He has not only displayed stunningly graphic action, but also expressive silence.

“As my career has been progressing, I feel that my timing has become slower and slower because I want to get to that level where you’re really looking at something,” Tartakovsky said.

“Genndy has always been one of my animation heroes,” said director Jorge Gutierrez (“The Book of Life,” “El Tigre”), who is currently developing the fantasy/adventure series, “Maya and the Three,” for Netflix. “He’s also an incredible role model to me since he’s an immigrant who managed to leave a mark in the U.S. animation industry with his personal take on our beloved art form.”

When Gutierrez was a student at CalArts, he remembers the profound experience of Tartakovsky showing a preview of what was to become ”Samurai Jack.” “The blend of art styles from American comic books to classic Golden Books, but with the action of anime and the cinematic influence of Leone and Kurosawa was too much for my little brain. His bravery and ambition was infectious. I shyly showed him a bunch of my student work after his talk and he was very kind and encouraging to a kid from Mexico looking to find himself. I never told him in person, but that exchange left me changed. So, of course, I was incredibly influenced by ‘Dexter’s Lab’ and ‘Samurai Jack’ when we made ‘El Tigre.’”

Starting with “Dexter’s Laboratory” (1996), Tartakovsky’s breakout hit at Cartoon Network about the wild adventures of a boy genius inventor, he demonstrated a flair for cinematic staging with more expansive compositions than previously attempted for cartoon fare. The series was so successful, in fact, that it propelled the careers of animators Craig McCracken (“The Powerpuff Girls”), Seth MacFarlane (“Family Guy”), Butch Hartman (“The Fairly OddParents”), and Rob Renzetti (“My Life as a Teenage Robot”).

With Cartoon Network’s “Samurai Jack” (2001), Tartakovsky further flexed his creative muscles with the groundbreaking dystopian/anime series about a warrior hurled into a dystopian future where he must fight his way back to the past to save his world from total destruction. With its penchant for thrilling martial arts fight sequences, long stretches without dialogue, and use of character design without black outlines, Tartakovsky took kid’s animation to a new level of sophistication and elegance.

Then, with the series “Star Wars: Clone Wars” (2003), Tartokovsky got to apply his talent for anime aesthetics and fight choreography to the “Star Wars” prequel universe. He notably introduced General Grievous two years before the release of “Revenge of the Sith” and his work continued to impress the industry at large, including director Jon Favreau, who hired him to storyboard action on “Iron Man 2.”

“Genndy has one of the most unique and inspired voices in animation today,” said Favreau, who currently presides over “The Mandalorian” on Disney+. “His knowledge of cinema informs his animation style and I draw a lot of inspiration from the imagery that he incorporates.”

In 2017, Tartakovsky returned to “Samurai Jack” after venturing into CG feature territory for the first time with the 2D-infused “Hotel Transylvania” franchise at Sony Pictures Animation. The climactic Season 5, though, was darker, bloodier, and more psychologically intense, and the director/animator enjoyed total creative freedom.

This carried over into “Primal,” about a caveman and a female T-Rex joining forces on a survival journey (the second half of Season 1 will air this fall). But “Primal” is darker, bloodier, and even more expressionistic than “Samurai Jack.” The wordless series with an extraordinary sound design sees Tartakovsky pushing his distinct style and cinematic flare even further with hot pink skies and fluorescent-looking blood from go-to production designer Scott Willis.

“To do something this ambitious as a big, dramatic action show with no dialogue, everything is reliant on the animation and the visuals,” Tartakovsky said. “It would have to be more subtle. And after we started working with Studio La Cachette, our animation studio in Paris, it was so obvious that you needed the little pieces filled in by real animators to have this extra storytelling and acting.”

Fortunately, the latest digital tech enabled Tartakovsky to be totally hands-on in the process, which was different from “Samurai Jack.” Instead of being limited to making notes, he personally changed the drawings in the TVPaint software file and sent them back to the animation studio. “I’m still an animator at heart, so I get to rough in some fight animation here and there,” he added.

And the opening fight with the T-Rex gang in the pilot was daunting. Tartakovsky obviously had to refrain from any of the martial arts choreography he previously relied on. It was much more basic bone crunching, object smashing, and spear piercing maneuvers. But he insisted on not overdoing the gore by toning it down after some of his excessive early drawings.

“His love of Kurosawa and Leone come through in his stylized depictions of action, and ‘Primal’ pushes it into the realm of ‘Conan’ and [comic book artist Frank] Frazetta,” Favreau said.

However, for Tartakovsky, the satisfaction comes from creating “these types of ideas that are a little bit more complex without dialogue — and people totally get it,” he said. —Bill Desowitz 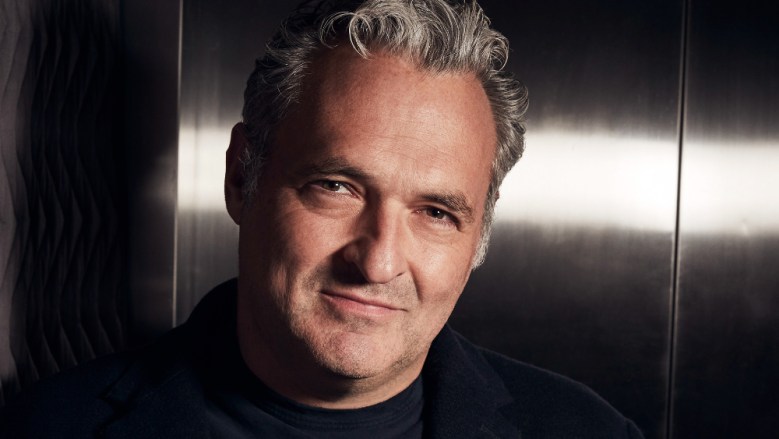 Watch Genndy Tartakovsky’s Incredible Animation in this Clip from “Primal.”