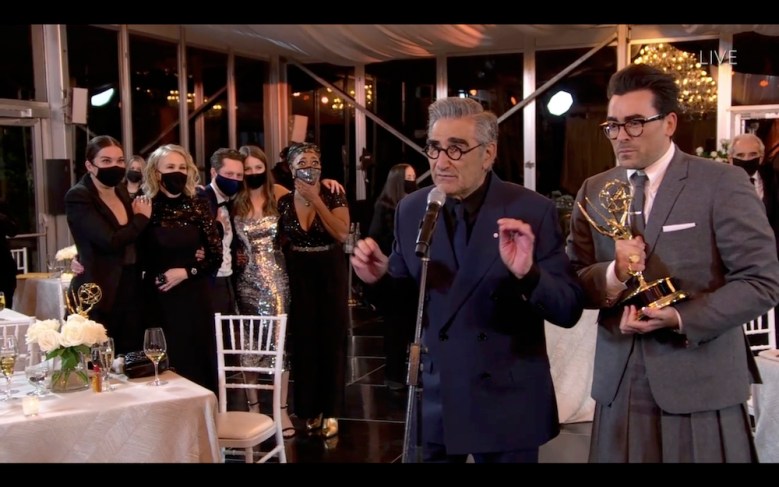 Ah, the Emmy Awards. You’ve gotta love them. You work and you research and you analyze and you try to make sense of disparate data, all in an attempt to figure out how a 73-year-old who used to be an extra on “Maude” is going to vote.

And then “Schitt’s Creek” goes and sweeps all of the comedy awards at the Primetime Emmy Awards, and all your theorizing goes out the window.

The 2020 Emmys were chock full of surprises, but none so historic as the Television Academy’s full throated endorsement of the Pop TV darling that accomplished a feat never before accomplished by a comedy. Winning Best Series, Writing, Directing, Actor, Actress, Supporting actor, and Supporting Actress, “Schitt’s Creek” joined revered 2003 HBO limited series “Angels in America” as the only shows to have ever taken home trophies in the seven most prestigious categories.

Given the state of the union and the pandemic that continues to plague it, there’s really nothing we can say about next year’s ceremony. At this point, we don’t even know if it will exist, in light of continued production delays and health concerns. However, what we do know, without a doubt, about the next time the Emmy Awards are presented, is that there won’t be a single comedy category in which a competitor is looking to defend their territory, having won the year prior.

It could serve as a clean slate for the TV Academy, who has been known (at least in previous years) to show fidelity to the same series year after year. Next year, the field is wide open. Maybe voters return to the welcoming bosom of Amazon Prime Video’s “The Marvelous Mrs. Maisel” or finally elevate HBO’s “Barry” to the utmost echelon. Or maybe FX’s “What We Do in the Shadows” follows in “Schitt’s” footsteps and uses this year’s eight nominations as a springboard to greater things down the line.

“What We Do in the Shadows”

One things relatively certain: We probably won’t have those pesky Canadians around to filch all our comedy gold.

For first thoughts on the 2021 Emmys and our final (God-willing) thoughts on the 2020 Emmys, check out this week’s episode of IndieWire’s TV podcast “Millions of Screens.” Hosts Deputy TV Editor Ben Travers, TV Awards Editor Libby Hill, and Creative Producer Leo Garcia also break down their most delightful surprises and bitter disappointments from this year’s Primetime Emmy broadcast, while Libby and Leo keep their eye-rolling over Ben’s Jennifer Aniston admiration to an absolute minimum.

Plus, stick around for the first ratings for the socially-distanced ceremony hosted by Jimmy Kimmel, which continued the downward trend for live award shows, but weren’t nearly as bad they could have been given the, you know, 2020 of it all. In keeping with ongoing social distancing mandates, this week’s episode was again recorded from the comfort of everyone’s respective Los Angeles-area apartments, and we’re again offering viewers a video version of the podcast, as embedded above.

This Article is related to: Awards and tagged Direct, Millions of Screens, Podcasts, Schitt's Creek, Video