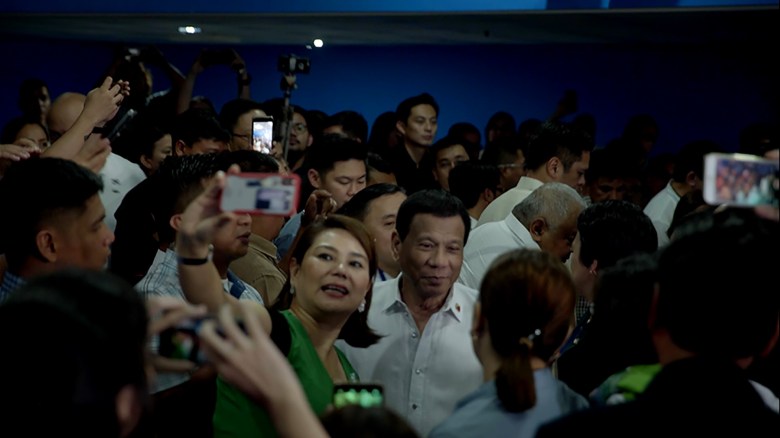 Seasoned journalist Maria Ressa, one of the most prominent media figures in the Philippines, puts her life on the line with every move she makes. After working for CNN for almost two decades, she founded the news network Rappler in 2012. The outlet has become a bastion for freedom of speech in a country under the thumb of ruthless ruler Rodrigo Duterte, particularly through their coverage of his violent war on drugs.

Ressa is the subject of director Ramona S. Díaz’s documentary “A Thousand Cuts,” which premiered at Sundance 2020 and was released in virtual cinemas earlier this year. Díaz chronicles Ressa’s ordeal as she faced social media attacks for speaking truth to power, due to government-sanctioned online networks dedicated to spreading disinformation. Currently facing the possibility of jail time if unfounded lawsuits against her move forward, and with her basic freedoms already affected, Ressa continues to fearlessly challenge Duterte.

At first, Díaz followed multiple characters in hopes of crafting an ensemble narrative, but when Ressa got arrested on multiple occasions after upsetting those in high places, she organically became the “center of gravity of the film.” The journalist gave Díaz full access to tell her story and that of Rappler. In the end the filmmaker compiled 800 hours of footage.

“She captured how you fight against a dictator, how a news group looks for a sustainable business model,” explained Ressa during a virtual Q&A as part of the International Documentary Association’s annual screening series. Surprisingly, the president was aware they were making the film. Instead of shooting under the radar, Díaz chose to be open about what they were doing and went through the system’s avenues to obtain permission to shoot Duterte’s public appearances. She believes this decision avoided giving the government more excuses to intimidate them.

Diáz and Ressa agree that social media platforms, Facebook in particular, have played a major role in the rise of populism, not only in the Philippines but as a global concern. In the aftermath of the Trump administration and the recent U.S. election, the film resonates directly with Americans grappling with the ideological warfare taking place online everyday, which affects society by dangerously blurring the lines between facts and propaganda.

“When I was making this film, it became very apparent that the Philippines is a cautionary tale and I think in a place like the Philippines, because it’s smaller, you can see clearly what goes on, right? All the machinations that are happening are clear because it’s a smaller place,” said Díaz. Watch the video of Díaz and Ressa’s interview with Editor-at-Large Anne Thompson above.

“Regardless of who won the U.S. elections, the fundamental problem is still there. And that’s the fact that social media platforms that are now the world’s largest distributor of news, prioritize lies laced with anger and hate over facts. This is documented. That’s what the research shows. That’s what the data shows. And until that is fixed, we live in the upside down,” said Ressa. “The seeds of distrust, of division are in the very platforms that distribute the news we need for our lives.”

For Ressa, having a higher international profile during this time has served as a protective device against the virulent dictatorship. While her future is uncertain because of the legal action taken against her, she faces this battle with utmost courage and even a dose of humor.

“I’ve always lived in this world where the work I do is in Southeast Asia. For 20 years it was for CNN, which meant I always had to calibrate how this event…will be interpreted with different lenses. The only reason I think we’re still alive is precisely because I live in those two worlds. I’m not so sure the Duterte administration knows what to do with me. I think they underestimated Rappler. They underestimated me because I don’t play well with bullies, you know? And I don’t fight back with anger. I just fight back by giving you the facts, which I think our world desperately needs…Look, I mean, it’s really president Duterte’s fault that we got all these awards because I’ve been doing the same thing that I’ve been doing forever,” Ressa said candidly.