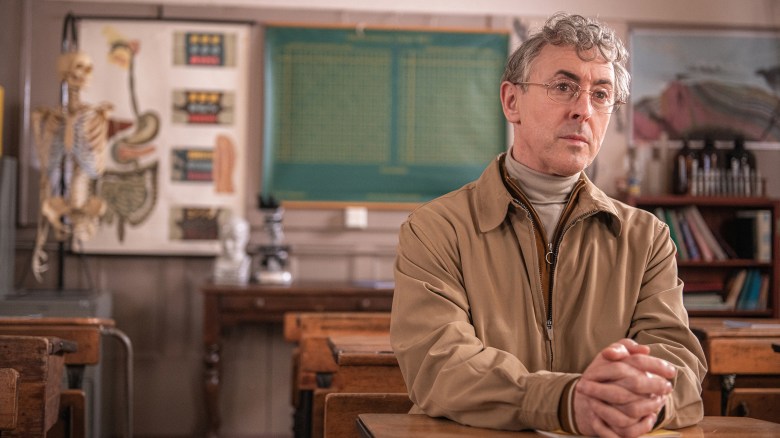 Director Jono McLeod’s documentary “My Old School” is a sort of real-life “Strangers with Candy” story of someone who arrives at a high school who… well, definitely doesn’t belong there. The film is based on the true story of Brandon Lee, a seemingly 16-year-old prodigy who enrolled himself at Bearsden Academy in a suburb just outside of Glasgow, Scotland, claiming to have been privately tutored in Canada while traveling with his opera-singer mother.

Cumming’s is a challenging performance because he is tasked with acting out Brandon’s wild story word for word, as he wooed his classmates with his genius and charisma but seemed all too preternaturally gifted beyond his years.

“Alan was involved in an earlier incarnation of telling this story on film that never came to fruition,” McLeod said. “It became known as this great Scottish film that was never made, so to be able to bring it to screen is just unbelievable to me.”

“[Brandon] could not be seen on camera. That was a stipulation. He sent me this gauntlet: ‘You can tell my story, but without me appearing on camera,'” McLeod said. “I always had in my head these lip-sync movies like ‘The Arbor,’ so I knew that was always an option. I didn’t know how I would find the right actor to portray that, but in the back of my head I always knew that, back in the day, Alan Cumming was attached to do this movie. And would you believe that Alan is my friend, and can I shame my friend into doing this project? I had no shame. I cornered him into doing this.”

Watch IndieWire’s “My Old School” conversation, moderated by Editor-in-Chief Dana Harris-Bridson, in the video above.

This Article is related to: Film, Video and tagged IndieWire Studio, My Old School, Sundance