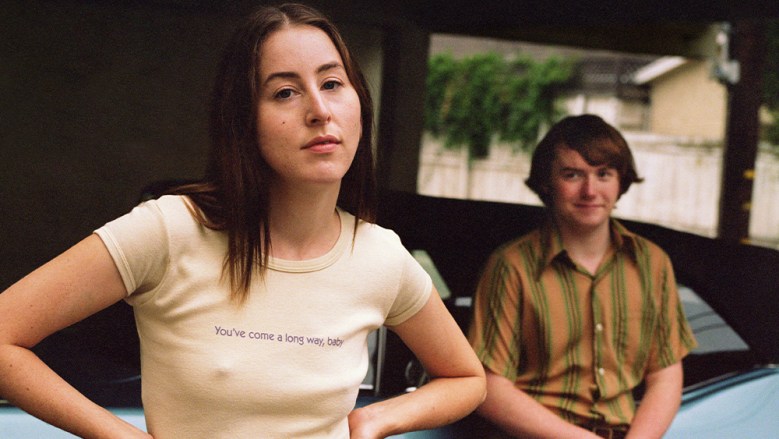 Acting newcomer Alana Haim’s first day on the set of eight-time Oscar nominee Paul Thomas Anderson’s “Licorice Pizza” was “intimidating,” she said in our video interview (above). “There’s props and trees being thrown everywhere getting ready for the shot, there’s this big truck, I’m surrounded by all these people, learning what their jobs are. And it’s chaos. It felt like the world is spinning around me and it stopped. And it’s me and [co-star] Cooper [Hoffman] and the boys. It’s silent and you hear ‘action!’ And Bradley Cooper as Jon Peters walked out. It was the first time we had seen him. We were fully in the deep end.”

Now, the Grammy-nominated musician has Best Actress nominations from both the Critics Choice and Golden Globe awards, for a movie that required her to hold her own not only with Cooper Hoffman but Sean Penn also. Haim is still reeling from this sharp detour from the life she’s been leading for the past 15 years as a member of the pop band Haim, with her older sisters Este and Danielle. The guitar-playing singer-songwriters were prepared to tour with their third album “Women in Music Pt. III” when the pandemic hit. Haim was jet-lagged in London when Anderson, who has directed about 10 of the trio’s music videos, sent her a script. When she saw her name on the first page, “I was shocked,” she said. (She had to load Word onto her phone in order to read it.) Anderson had said he was going to put her in a movie one day. “Cool,” she thought. “I’d be an extra with coffee in the background.”

Anderson told her he was writing a story about a character named Gary Valentine (Cooper Hoffman) based on producer Gary Goetzman, who was a young waterbed entrepreneur in the ’70s. “I was honored he was inspired to use my name in this movie, great!” said Haim, who’s cast in the movie as an aspiring photographer named Alana Kane. “It was the first script I read in my life. I’m a musician. I fell in love with Alana and the twists and turns and stunts and people she meets, the running, everything about it, her driving. I loved Gary and the relationship with his mother and brother, taking care of his brother at such a young age, with so much responsibility, and Alana living at home in her late 20s. She’s technically an adult but is still a kid.”

It began to sink in that Anderson had written this script for her. “I’m in awe,” she said. “I’m a fan of the moviemaking process in general. Did I think I could act? That’s a big no. I never had acted other than the Wicked Witch of the West in high school.”

When Anderson asked her if they should read Cooper Hoffman, son of Philip Seymour Hoffman, she immediately said “yes!” She had met the young teenager when the band visited the director’s editing suite in the San Fernando Valley during 2017’s “Phantom Thread” to discuss how to shoot the video for “Little of Your Love.” “Who is this kid Paul is with?” she asked. When Anderson had to rush out, the hungry Hoffman asked the girls to take him out to a restaurant. “We took him to the original Katsuya at a strip mall in the Valley,” said Haim. “I didn’t know it, but we were having dinner with Gary Valentine. He was owning the room, he was ordering for us, asking us questions, he was not intimidated by three older girls at all. There was no lull in the conversation. He had so many incredible stories he was telling us.”

Haim had read with some “incredible young actors,” she said, “but it didn’t feel like Alana and Gary. The second I read with Cooper, I knew he was my Gary. I had met with Gary Valentine years before that.”

“Licorice Pizza” centers on the intense kinship between the high school kid and this young woman in her late 20s. “Gary and Alana, the universe is bringing them together on Picture Day,” she said. “They have a hilarious conversation. It happens quickly. They don’t know their lives are going to be forever changed; they have such a crazy bond from the beginning. It’s not a romance. Honestly, they are so connected, they are like magnets. No matter how many crazy things happen, they are forced back together through life.”

Anderson has never satisfactorily answered the question of what he saw in Alana, she said. “He said, ‘I knew.'” When she was working on the movie, she felt no fear.  “I’m up for anything. If he told me to go across the street and jump off a building with a parachute, I’d do it in a second. Of course, I had fear of driving a truck. Paul makes the people he’s working with invincible.” Only when she went home did all her insecurities flood through her mind. “Oh, God, did I do OK today? He’s so encouraging and incredible, I couldn’t have started this chapter without him.”

That trust was built over shooting all those videos, Haim said: “Paul has this insane gift, to bring out the best parts of you on film. I don’t know how he does it. It’s something in his blood. He sees something in people that he’s finding.”

The driving involved a moving truck with a stick shift and no power steering, which Haim trained hard to be able to drive, often down winding narrow roads in the Hollywood Hills — in reverse. “Eighty percent of the driving was me,” she said. The first time she drove the truck on camera, she was interrogated by Bradley Cooper. “You have to imagine a movie camera that cost more than my life strapped one side, lights in front, a tiny street in the hills. It was my second day on set, with the lovely Bradley Cooper trusting me with his life.” When he asked her questions about her life, she was so nervous she just answered them truthfully.

When she took the part, she asked Anderson if she should take an acting class. “Absolutely not,” he said. “I got you.” He also cast her sisters and parents, who still live in the same house in the San Fernando Valley she grew up in. “There was never a discussion,” she said. “Who else could play my family other than my family?”

Haim has not yet been approached for any other acting gigs. “I love acting,” she said, “but I had a director who took care of me and Cooper and everybody on the set.” With the pandemic interrupting the Haim trio’s planned tour, she’s looking forward to getting back on the road with the band. “I’m going right back to my day job. I’m lucky I can.”