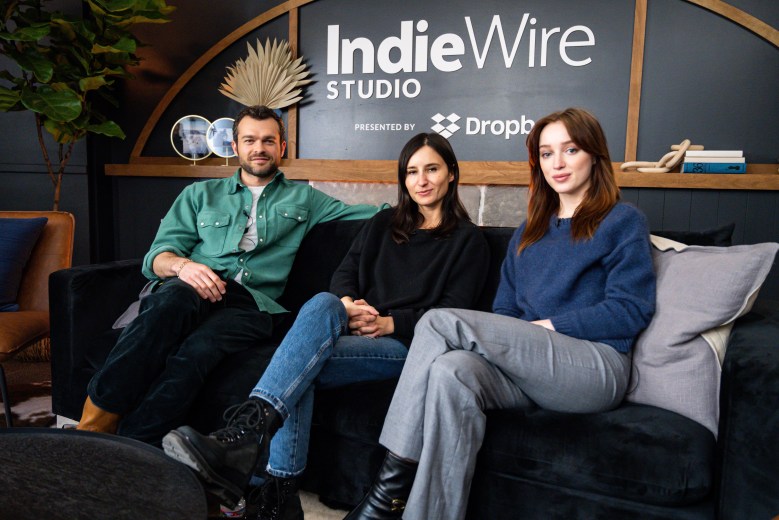 Writer/director Chloe Domont’s shocking feature debut “Fair Play” was just the needle in the heart the 2023 Sundance Film Festival needed. The U.S. Dramatic Competition entry, starring Alden Ehrenreich and Phoebe Dynevor as a couple jockeying for power at a high-stakes financial firm, is already a buzzy acquisitions title since premiering on Friday. The film has drawn comparisons to HBO’s “Industry” and retro psychosexual thrillers in presenting an unnervingly ambiguous portrait of the gender dynamics at play in a relationship on a path to annihilation.

Director Domont and stars Ehrenreich and Dynevor stopped by the IndieWire Studio at Sundance, presented by Dropbox, to unpack the movie, now a hotly debated conversation piece at the festival.

“People are reacting the way I wanted them to. Definitely, the audience felt the movie the way that I wanted them to. I was very surprised at some reactions, getting laughs in some places we weren’t expecting, and a lot of it was uncomfortable laughter,” Domont said.

Dynevor highlighted the presence of an intimacy coordinator on the set for “Fair Play’s” crazier moments, including an early-in-the-film sex scene where the two leads, Emily and Luke, find themselves covered in menstrual blood.

“I just remember feeling how exciting it was to shoot a scene like that. I haven’t seen a scene involving that before, so it was like a fun experience to bring that. It happens, but we don’t show it,” Dynevor said.”

“It was supposed to be charmingly dysfunctional, and I was just trying to go for that as much as possible,” Domont said.

“You’re very fortunate to get a quality of writing, to get to play characters that are this nuanced and complex and thoroughly written, but really at the end of the day, who you’re doing it with is everything. The fact that Phoebe and I got along the way we did and felt compatible in that way was really great, and rehearsal is just the thing that I’m shocked [is] not done more, and that it’s not studied as a craft in and of itself more. Especially with films about relationships,” Ehrenreich said. “When the firing squad comes in to film the movie, you have that ensemble built. It means everything, and you’re able to be more vulnerable and feel safer.”

“Fair Play” deeply embeds the audience in the zippy parlance of the financial world, which Domont said she had no experience with personally before making the movie. Dynevor, however, said she did a great deal of research on her own to understand the lingo and dynamics of what goes down behind the scenes in a Manhattan Financial District high-rise workplace where money is everything.

“I bought a book called ‘Hedge Funds for Dummies,’ something like that, and just read that,” Dynevor said. “We got a Zoom tour of someone’s office in New York, so that was interesting, and I spoke to a family friend who runs a hedge fund. Interestingly, and slightly embarrassingly, I didn’t speak to any women who worked in a hedge fund. I couldn’t find one, because they don’t exist… Getting the jargon and understanding that was quite a feat.”

With Ehrenreich in the Studio, IndieWire of course had to ask about his relationship to 2018’s “Solo: A Star Wars Story,” in which he took on the origin story of Han Solo, one of the “Star Wars” universe’s most iconic characters. While Ron Howard recently said that fans should not expect a sequel or follow-up of any kind from Lucasfilm, Ehrenreich said he’s open to reprising the role.

“The story that I did, I really got to be Han Solo at the end. That’s kind of the arc of the story, which I thought was well done. That’s the fun part. That’s the guy that’s the most fun to be. I’d be very happy to, but who knows,” Ehrenreich said.

This Article is related to: Film and tagged Sundance Studio 2023