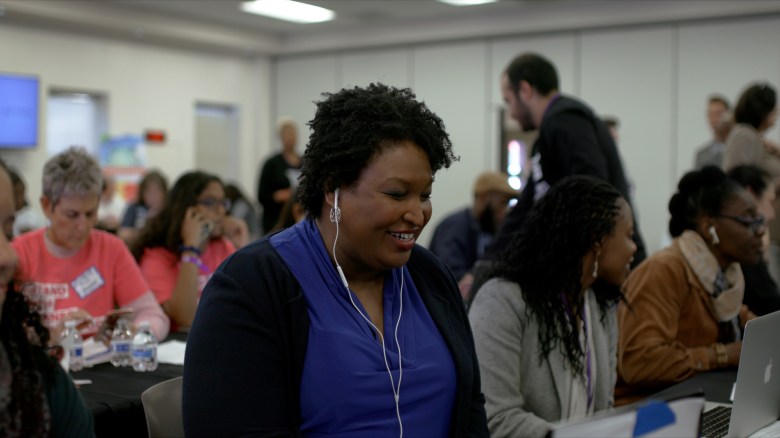 Making their powerful documentary “All In: The Fight for Democracy” was an unusual experience for co-directors Liz Garbus (“What Happened, Miss Simone?”) and Lisa Cortés (“The Remix: Hip Hop X Fashion”). Instead of having to pursue a story or a subject, the project came to them. Former Georgia gubernatorial candidate Stacey Abrams was looking for filmmakers who could unpack the history of voter suppression that has disproportionately affected people of color, young individuals, and those from underprivileged economic backgrounds. They were a perfect fit.

“She saw that, post her run in 2018, that there was a need to educate people about voter suppression, voting rights and the long tail of American democracy, where it has worked and not worked,” said Cortés as part of the International Documentary Association’s annual screening series. For the filmmaking duo, this was an incredible opportunity to shed light on the larger picture through a personal story, that of Abrams’ eventful race for governor.

“The past is prologue to this moment that we find ourselves in,” said Cortés. Understanding the key events that have shaped American democracy in relation to voting rights, she believes. From the 15th amendment, to poll taxes, to the Voting Rights Act of 1965, and the devastating aftermath of the Shelby County v. Holder decision.

The film tries to provide context for important conversations all citizens should have, especially when discussing how many people are actually allowed to vote in this country. “We can’t look at our elections, we can’t look at voter turnout without thinking about our history and how we got to now,” explained Garbus. Watch the video of Garbus and Cortés’ interview above.

One of the issues that concerned the filmmakers the most was the myth of voter fraud, and how misinformation has shaped the political landscape. Fact-checking was a priority for the team in order to ensure that every point presented on screen was based on verifiable information and not subjective opinions.

Similarly, Garbus and Cortés felt compelled not to sugarcoat the violence and intimidation tactics happening at polls since the 2016 election, and even more so this year, in an attempt to deter voters from exercising their right. “It’s something we all need to be vigilant about. Folks need to show up for one another. I think white allies have a big role to play here. We have to show up and try to bring joy and positivity to the polls, to counter the kind of voter intimidation that we seem to be about to confront and in larger numbers,” added Garbus.

In addition to creating thoroughly researched projects that cohesively intertwined Abrams’ personal trajectory with an in-depth historical account, their goal was also to avoid being didactic. Rather than having their subjects recount stories for which they didn’t have archival footage, they opted for using animation strategically. According to Cortés, the purpose was to access the emotions those accounts evoked, which talking-head segments alone couldn’t have achieved with the same potency. “Animations allow you to also look at the interiority of what’s happening with the characters,” she noted. Illustrator Diana painstakingly crafted the sequences with textured hand-drawn panels.

Having a successful outreach campaign was also a key element for the film from its inception, in order to enact real change and spark necessary conversations during one of the most important elections in the history of the United States.

“We have a website allinforvoting.com with a broad range of resources, everything from checking your registration to signing up to become a poll worker. But we also offer curriculums there for high school and college students. Our partnership with Amazon had these… bus tours that went all over the country, not only holding pop-up screenings but registering people,” explained Cortés. “What’s very important for us is that you have to meet people where they are. This film is about igniting this civic engagement and in many communities we’ve seen how the desire to engage has been beaten down literally. And so with the film, but more importantly with our outreach, it is about continuing that momentum of engagement.”

“All In: The Fight for Democracy” will be available to watch for free on YouTube starting today and until November 1.

This Article is related to: Film and tagged All In: The Fight For Democracy, Amazon Studios, International Documentary Association, Lisa Cortés, Liz Garbus, Stacey Abrams