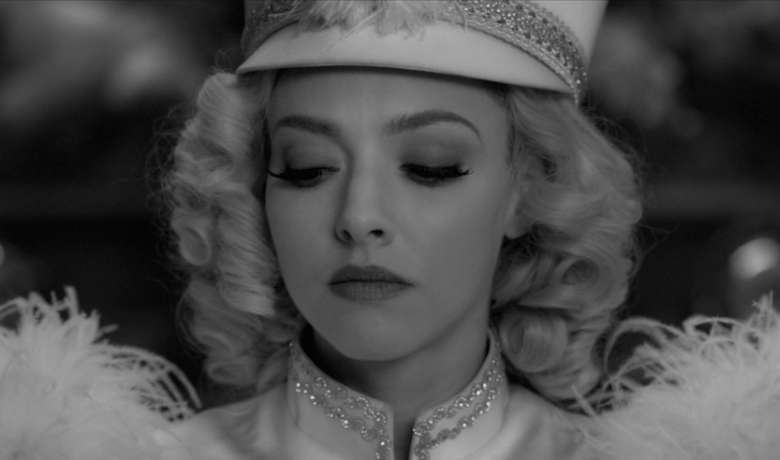 Amanda Seyfried fits a specific Oscar paradigm: the young pro who’s been cruising along when she breaks out in a performance that exceeds everyone’s expectations. It’s that legitimizing moment when the right actor surprises the world in the right role: Vivien Leigh in “Gone with the Wind,” Jodie Foster in “The Accused,” Adrien Brody in “The Pianist,” Liza Minnelli in “Cabaret,” Reese Witherspoon in “Walk the Line,” Natalie Portman in “Black Swan,” Charlize Theron in “Monster,” Halle Berry in “Monster’s Ball,” Angelina Jolie in “Girl Interrupted,” Cuba Gooding Jr. in “Jerry Maguire,” Gwyneth Paltrow in “Shakespeare in Love,” Brie Larson in “Room,” Emma Stone in “Lala Land.” Sometimes the Oscar love catapults the actor into major stardom — other times, they never fly as high again.

She’s been holed up with her husband Thomas Sadoski (“The Newsroom”), a toddler and a four-month-old in a farmhouse in the Berkshires. She was pregnant at the end of production, which wrapped February 21, 2020 before entering lockdown. She welcomed the family time, but still had to erect a soundproof room in her guest house to do some 30 hours of ADR on three movies, including “Mank.”

“The banter you read in the script and see on-screen is not just this perfect script,” she said. “Gary’s not precious at all over his job. He’s professional. He can play around and that playfulness makes you feel that the two people are comfortable with each other. So many gifts come off that. It’s at times seamless and effortless. That’s what you are feeling. You get to see a beautiful bond between two smart and honest people.”

Oldman and Seyfried managed to roll with Fincher’s perfectionism and demands for multiple takes. “Rarely do you fall into something that is there for you like a warm bath,” said Seyfried. “Everything is deliberate. When he asks you to do a movie… you walk on set with a director who knows everything. It feels like, ‘How could it go wrong?’ There’s a level of insecurity and intimidation I always carry with me; that’s how I’m built. But as scary as it was, it felt really safe. He knew where we were going, and how to get what we needed, to get out of me what I needed to bring.”

The actress said she had never had this experience, except in the theater, and realized that her own fears sometimes prevented her from going all the way. “At 35, I finally realized I’ve been lazy in some ways,” she said. “It isn’t the first time I’ve had this much demanded. [See her performance in Paul Schrader’s 2017 religious drama “First Reformed.”] Working with David, you have that much time to find the role and the moment and tell the best story. I have risen to the occasion before. I know I have it in me.”

She pushed herself as a young singer-actress in “Mamma Mia!” and especially, Tom Hooper’s “Les Miserables,” she said. “There have been challenges that I struggled with, singing live and not feeling I was ready technically. I wasn’t there. I still say to my voice coach every day I wish we could redo it. In one aspect, I always feel comfortable—my instinct to make things as real as possible. I can rely on that and fall back on that. I feel like I’ve fallen back on that a few too many times without being fully rounded. Regrets? No…kinda.”

The retakes were tough during 12-hour days. Seyfried struggled with one complex interior castle group scene that she timed on her iPhone at 8 1/2 minutes. “It wasn’t a back-and-forth. It wasn’t a natural cadence to the conversation, which was happening with eight people at a time. People would interject. There was the technical aspect of me trying to remember when my line comes in; sometimes it was a non sequitur. Things weren’t natural to say — it was the ’30s — it was not effortless. Grueling is absolutely the perfect word to describe that specific scene. I couldn’t find the light in it. It was one of first scenes I shot; instead of getting better, I felt like it was getting worse.”

Going forward with a new baby on board means being pickier about what she does next. She knows Fincher will be hard to top. “I usually sign on to movies with one or two elements that are attractive; maybe now, I need five,” she said. “I can play anybody… I just want to play Glinda in ‘Wicked.’ There are certain things I would leave the beautiful children and husband behind for, and one of them is ‘Wicked.’ Sometimes you need an opportunity to work with someone like Fincher to get you to do something else.”