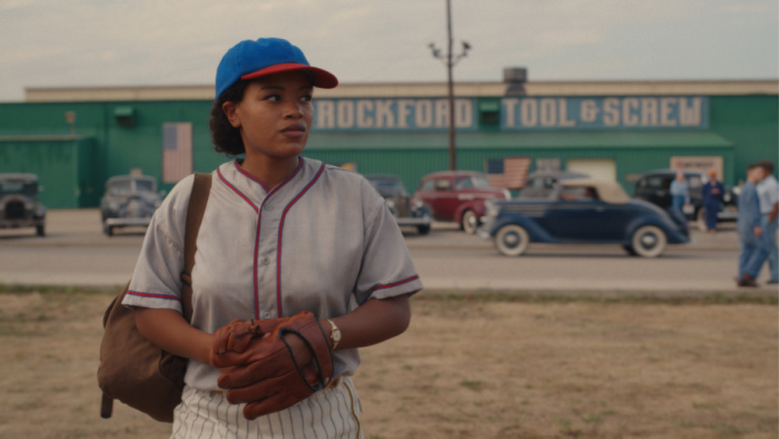 There might not be crying in it, but it takes a lot of people to play the game of baseball. While Abbi Jacobson’s and Will Graham’s series reboot of “A League of Their Own” features some nods to the original 1992 Penny Marshall film of the same name, it has the space and opportunity to tell more than 9-innings’ worth of stories and support an ensemble cast, led by Jacobson herself, that feels representative of America in the way that great baseball stories should; but the show is also refreshingly honest about how unabashedly queer baseball’s past is, for how it handles segregation and the marginalization of the incredible African American talent kept out of the Major Leagues, and for how it handles the tension between players and owners, something that baseball has definitely solved and isn’t a problem any more. (We kid.)

To set the tone for a show that has to manage a lot of storylines, characters, tonal valances, and wrap them all up tighter than, well, the stitches on a baseball, the director of the show’s first three episodes Jamie Babbit employed a roving camera that unites all the characters in a single shot and makes them feel like a team, even before they are one. Babbit also pushed to make the baseball sequences themselves as exciting as possible for fans and non-fans of America’s Pastime alike, merging personal conflicts and narratives with the plays on the field. In the video above, watch how Babbit brought her wealth of comedy experience to creating a grounded, gorgeous world for the show to inhabit, one where both the baseball games and the players were exciting to watch.

Watch Babbit break down how she approached creating baseball games the show’s characters would love above, or listen to the entire discussion below.

You can also listen to the full discussion by subscribing to the Toolkit podcast via Apple Podcasts, Pocket Casts, Spotify, or Overcast.

On Babbit’s First Impressions and Goals for the Pilot:

Babbit: I actually got sent the ‘League of Their Own’ pilot while I was in P-town. I was vacationing with my gay family: two daughters gay baby daddy, ex-wife, current partner. And I read the script and I just saw it in my head and I was like, “I have to direct this, like, no one else is directing this. I literally could not be more perfect to direct it.” And so I had my interview with Abbi and Will and I talked about my passion for the script and why I thought it was really special. And as a queer person who had seen the original “League of Their Own” and really loved it, I felt the void of queer stories when I watched the movie. There was a certain kind of void that existed in 2000, which is why I made “But I’m A Cheerleader,” my first attempt at filling the void so that there would be more lesbians in film and TV and to see “League of Their Own” be reimagined and actually tell the real stories of these women, that was really exciting to me.

I basically had my first interview and I talked a lot about how I saw it and that it had to be really funny, but it had to be emotional and I wanted it to be really cinematic and I wanted it to be romantic, and I mean, to be honest, a lot of things in “But I’m A Cheerleader” are similar. Like it’s funny, but it also has heart. And I had two more interviews after that with different people, then a second interview with Will and Abbi. And one of the things I said at my last meeting with them is the first thing I wanna do is meet these women, because I know they exist and they were actually having a convention of all the living members in Cooperstown, New York, that weekend. And I said, “I wanna fly down immediately from this interview to Cooperstown and meet the women who are all in their nineties.”

It was such a great way to start. The whole process was hanging out with Mabel and her cast of friends and a lot of queer players and hearing their stories. You know, at that time they were kind of out to other gay people, but not really out to other players and just hearing what fun the league was and how none of that had ever been talked about, like all the queer joy that they found in being these small town girls who finally got to be together and all the romances and heartbreak and fans – and getting paid a lot of money at that time to play professional baseball. I mean, they got to be professional athletes, which was incredible, and live in this kind of all female society. I mean, especially because, you know, most of the men were gone fighting in the war at this time. So it just was a really special time in history and I was just even more excited about directing the pilot once I met the women and saw how vibrant and amazing they were. I was like, “Yeah, we have to tell this story in all of the joy that goes with it.”

“A League of Their Own”

On Shooting the Large Ensemble on the Field and Off

Babbit: I knew I wanted some slow-mo sequences. I knew I wanted fun things like the splits and people doing jump balls, all that like six frames per second freeze frames of people in the air. Just like Leni Reifenstahl Olympic moments, the body in motion. It’s a very cinematic world. So that was very fun. It’s not just a bunch of closeups of people in an apartment. So there were a lot of fun challenges. There was the period thing there. A lot of cinema and the sports stuff, there was really beautiful locations, like being able to shoot Chicago in the 1940s and Wrigley Field. That was certainly a challenge, shooting at those grand old hotels. And honestly group scenes, I mean the challenge I think of directing that show is that you have 15 actors in every scene. So how do you cover the scenes in a way that feels energetic and fun and also doesn’t take forever because I didn’t do closeups of everybody. I had like moving masters, which is something I had done for years on “Maisel” and “Gilmore.” You basically have one shot per scene.

“A League of Their Own”

On the Baseball Sequences

Babbit: I felt like for all the baseball sequences, there needed to be some kind of story. There was always a story. So for example, in the pilot, Carson and Greta, they’re auditioning – auditioning – they’re trying out for, see, you can see I’m a theater kid, not a sports kid. But they’re trying out for the league and what is the story? Okay. The story is they just met. They have a sparkle to each other, but they don’t know each other. So what’s the journey of them playing baseball? How does that cement their friendship? What’s the tension? I love the scene where Abbi pretends that she’s not good and she’s really nervous. And Greta says to her, you know, you just need to focus on yourself and don’t worry about other people. Like, “you can do it!” And she’s like, okay and pretends like she’s really nervous. And then she kills it and she’s like a total stud. So it’s just like fun, playful storytelling within the sports.

That’s my favorite kind of storytelling and movie-making, anyway, is doing things, not through dialogue, but through the action. So, whether it’s just nonverbal things that people do to speak to each other, that’s the best thing that cinema can tell. And if I think about all my favorite moments in cinema throughout time, it’s always quiet moments. It’s not lines for me. It’s always silent moments where cinematic things are happening and there’s no dialogue. So that’s the great thing about a sports movie, and I think movies like “The Natural,” movies like “Bill Durham,” movies, like “Field of Dreams,” I mean, I loved all those movies. And once again, not a sports person, but they had great story.

This Article is related to: Television and tagged A League of Their Own, Abbi Jacobson, Filmmaker Toolkit Podcast, toolkit-166