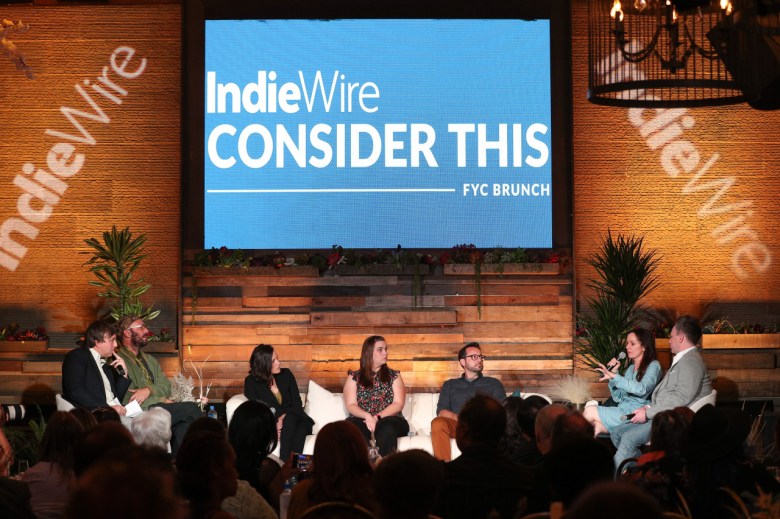 Written by Shia LaBeouf during court-ordered rehab and featuring a performance by LaBeouf as a character inspired by his own father, director Alma Har’el “Honey Boy” combines elements of documentary, fiction, and therapy to tell the story of a child actor’s troubled relationship with his father and the actor’s subsequent work of recovering from addiction.

Craftspeople who worked on the project, speaking at a panel centered around Amazon movies at IndieWire’s Consider This FYC Brunch, say the unusual nature of the film meant that it simply couldn’t be produced using conventional methods.

For DP Natasha Braier, planning is usually key to working on shoestring budgets like that of “Honey Boy,” which was shot over 19 days. Yes, she and her colleagues planned, but they needed to make room for LaBeouf’s catharsis, which didn’t end with the final draft of the script.

“We couldn’t really predict what Shia was going to do in the space, because even if he had dialogue and he was following the script, he has a very amazing way of using the space as an actor. You only see it when you start rehearsing or when you start to shoot the first rehearsal,” she said.

That, coupled with Har’el’s documentary-informed preference for camerawork that’s “free and raw and alive and searching, and discovering what the characters are doing” led Braier to a novel solution: She replaced all practical lights on the set with LEDs and invested the rest of the small lighting budget on wireless controls. That allowed her to “DJ” the lights as to not interrupt either the actor or director’s methods.

“What we didn’t want to do was [have the actors do the scene once] and then we learn what’s happening and then we come and tweak. We just wanted him, once he’s in that room, to not have any interruptions, like now we need to come in and move some things,” Braier said. “It was to delegate what he was doing. He was getting so vulnerable. He was doing a great performance but also going through some therapeutic process.”

In the cutting room, editors Monica Salazar and Dominic LaPerriere created an assembly cut that matched the linear script. But Salazar said it was immediately clear the film would end up being intercut with scenes from Otis’ childhood, where the LaBeouf-inspired character is played by Noah Jupe, and those from his adulthood, where he’s played by Lucas Hedges.

“What was inherent already in the script was these cycles of abuse and addiction. There were all these connections that were inherent and they were purposeful,” LaPerriere said. “The edit was mostly finding those connections and finding those exact moments when the childhood reflections really impacted the most.”

Production designer Jahmin Assa described how he and his team created 1970s Los Angeles on a small budget for “Seberg,” one that didn’t even provide for many period cars. The Benedict Andrews-directed film stars Kristen Stewart as “Breathless” actress Jean Seberg, who began to be surveilled by the FBI due to her associations with activist Hakim Jamal. That meant shooting a lot indoors.

“We worked hard to make our spaces feel larger than they were and more dynamic and more of-the-time and lived in,” Assa said.

With limited resources, Assa ditched the predictable FBI bullpen office to create a mobile surveillance unit, one that he said felt very dynamic and large.

DP Rachel Morrison said darkness worked in her favor in the film, which attempted to contrast the sunshine and glitz of Hollywood’s outward appearance with the despair underneath. She said she created a visual language that balanced voyeurism and intimacy.

“The Report” editor Greg O’Bryant said the challenge of working on Scott Z. Burns’ movie about the Senate investigation into the CIA’s torture program was balancing Burns’ impeccable research and not bogging down audiences with those details — all while ensuring the facts lead the narrative.

Each piece of the film was footnoted and devoted to facts, but it was crucial in the editing room to create a rhythm that didn’t allow dramatic information to overshadow crucial expository plot points, he said. As an example, he pointed to
a working on a scene featuring detainees on ships in the Red Sea.

“It just completely took away from what we needed to be the salient point of that scene, which was a sort of more pointed, broader scoped thing that we as an audience probably didn’t know,” he said. “That’s a great example of like a killer detail that really hits you in the stomach when you’re watching it, but that it hits you too hard, too early in the scene and then you kind of miss the salient point.”

This Article is related to: Awards and tagged Amazon, Honey Boy, Seberg, the report