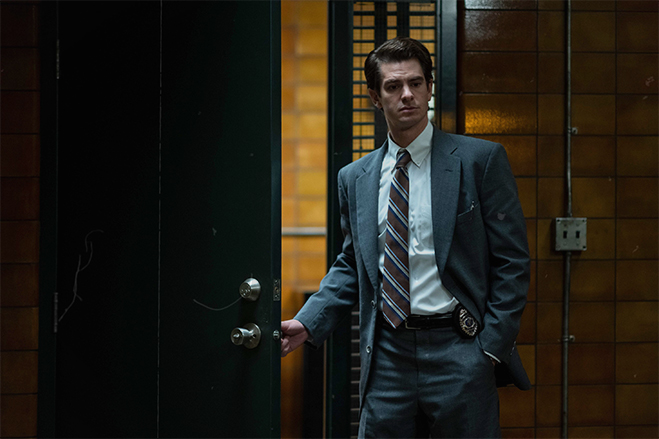 To prepare for the role of Jeb Pyre, the Utah detective in FX miniseries “Under the Banner of Heaven” whose investigation of a double murder threatens to unravel his family and his Mormon faith, Andrew Garfield headed straight for the source: the campus of Brigham Young University.

“To pick up an almost frightening optimism that was coming off of these young Mormon students, I had to bite my tongue a lot,” Garfield told his director (and former Mormon), Dustin Lance Black.

“Was there pushback, or did you meet ‘Mormon polite’?” Black asked.

Black spent nearly a decade trying — and failing — to adapt Jon Krakauer’s nonfiction bestseller as a feature. Success came only after Black did two things: let the movie become a miniseries and create a lead character who isn’t in the book.

While Utah detectives spent years on the tragic case of Brenda Lafferty and her toddler Erica, Jeb Pyre isn’t based on a person. Instead, as Pyre comes to terms with a faith that led two men to believe that God instructed them to commit two brutal murders, he lets the audience experience the intense conflict between faith and fact explored in Krakauer’s book.

Garfield said he appreciated Pyre’s struggle, calling its portrayal “a gift. Such a compelling and inherently actable, playable conflict,” he said. “He cares about his faith and his church so much, he cares about his wife so deeply, his kids… his imagined future in the ‘Celestial Kingdom’ with his wife and kids born and unborn. All of this crumbling within him simply as a byproduct of doing his job.”

For more on “Under the Banner of Heaven” with star Andrew Garfield and writer-director Dustin Lance Black, watch the video above.