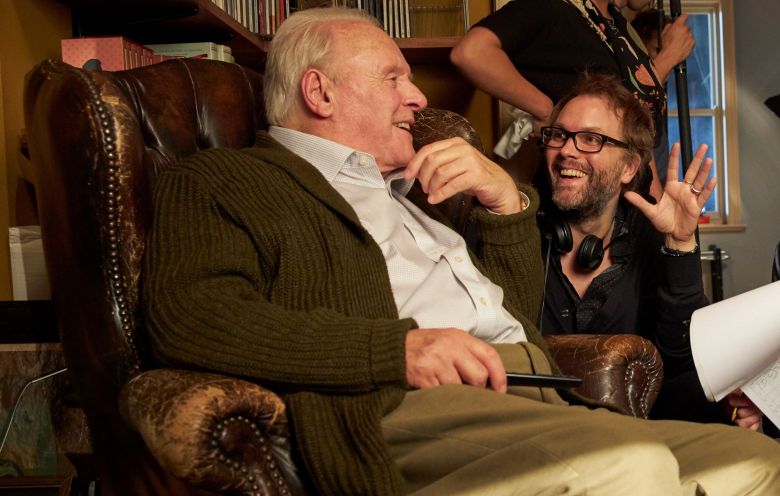 When the time came for Florian Zeller to turn his hit play “Le Pere,” which had wowed audiences in Paris, London, and on Broadway, where the English-language production won a Tony for Frank Langella as the aging patriarch fighting against the dying of the light, the playwright turned to Oscar-winning screenwriter Christopher Hampton (“Dangerous Liaisons”), who had translated his plays into English. The two men renamed their protagonist Anthony, and cited Anthony Hopkins’ actual birthdate in the screenplay.

The play resonated with audiences in a way that Zeller never anticipated, as the film has. “Everyone is related to this issue,” he said. “Everyone has a father, or will have to deal with this dilemma of what do with people you love when they suffer from dementia…We are all in the same boat.”

Zeller wanted the Oscar-winning Hopkins (“The Silence of the Lambs”) “to explore the emotional territory and be connected to the feeling of mortality,” he said. “My admiration for what he did was immense. He went to an emotional, fragile, vulnerable place. It was not about creating the character, it was something more instinctive. What I was hoping was for Anthony to just be in front of the camera, not faking the disease, trying to be as connected as possible to truthful feelings.”

Hopkins got the screenplay out of the blue from his agent. “It was just a perfect script,” said Hopkins, “the clarity and compactness got my attention right way. I read it, ‘Boy, God, this is it!’ I want to do it, it’s written so simply, no fanfare of Hollywood, it’s a small independent film, a French film with an English actor in it. The style is a very French film.”

As soon as he met Hampton and Zeller at a Los Angeles hotel, the actor agreed to shoot the film. At 83, Hopkins has been on a roll, having starred in not only Oscar-nominated “The Two Popes,” but in two recent Richard Eyre films, “The Dresser” (2015) opposite Sir Ian McKellen, and Shakespeare’s “King Lear” (2017), 40 years after he first played the title role. “I was too young in my 40s,” Hopkins said. “By the time I played him, I was old enough, with more experience of life, and more understanding of age and mortality and all the rest of it.”

At this stage, the actor no longer worries about delivering a performance. “My only theory, I don’t know very much, is you have to have confidence,” he said. “You have to be sure you know what you’re doing, like driving a car, playing tennis, or being a carpenter. You have to know the technique, learn the text. I stopped overthinking. You devour the text until it becomes part of you for those days. You follow the impulses and the director’s suggestions, and you listen.”

Instead of conventionally “opening up” the play, Zeller and Hampton designed a puzzle of a script that would throw the audience off-balance and make viewers feel the disorientation of the character by leading them through an interior labyrinth that was like the Hopkins character’s dementia-distorted mind. “I wanted ‘The Father’ to not only be a story, but an experience,” said Zeller, “what it could mean to lose everything including your bearings. I had to find a visual way to tell that story. I worked with Peter Francis the production designer with the space. The memory has to do with time but also space as well. The apartment, that space is like a mental space. At the beginning, this is Anthony’s apartment, with knick-knacks and furniture. Step by step in the background are small changes. You know where you are but you don’t know exactly where you are anymore.”

The goal was to keep the audience alert, trying to figure things out, and eventually, to experience the emotional journey. “There’s always one piece missing,” said Zeller, “so you can never completely understand…When the moment comes, you let it go, and can understand on another more emotional level. The journey of the narrative is sometimes complex, but we lead to a simple place, simple emotions.”

The destination of the film is a scene at the end when Hopkins breaks down completely. “We knew it was the most important scene to film,” said Zeller. “If it was not as truthful and powerful as it should be, then the whole film was a bit pointless in a way. That was where we want to go.”

Hopkins understood this. “It was the most challenging scene,” he said. “You have to be emotionally ripe for it.” So when the first take didn’t go well for him, Hopkins retreated to his dressing room to collect himself and give it another go. He held onto several keywords to trigger emotions from his childhood: “Mummy, the wind, the rain.” He also recalled a childhood moment in Wales when he was five years old, on a Sunday afternoon, when a friend told him “we all die.”

That was enough to bring on powerful feelings. He also conjured up a trip to the hospital where his father had just died. “The bed was already occupied by another old man,” he said. “It had a tremendous cumulative effect…This is it, forever and ever. What was it? Was it all a dream? Life, I’m convinced it is all a dream, it’s a personal conviction. Both my parents are dead. Did they ever exist? There is no proof any of this exists. That’s my peculiar take on life: it’s all an illusion. I’m free, in a way. I can’t take credit for any of it. It’s not modesty or humility. It’s a puzzle to me. I think, ‘my God, how did any of this happen?’ It’s true, those emotions are on the surface. I’m 83, facing my own mortality.”

Next up: Zeller is continuing with his trilogy, with “The Mother” and “The Son,” which he is hoping to do next as a film, this time with Hopkins in a supporting role.