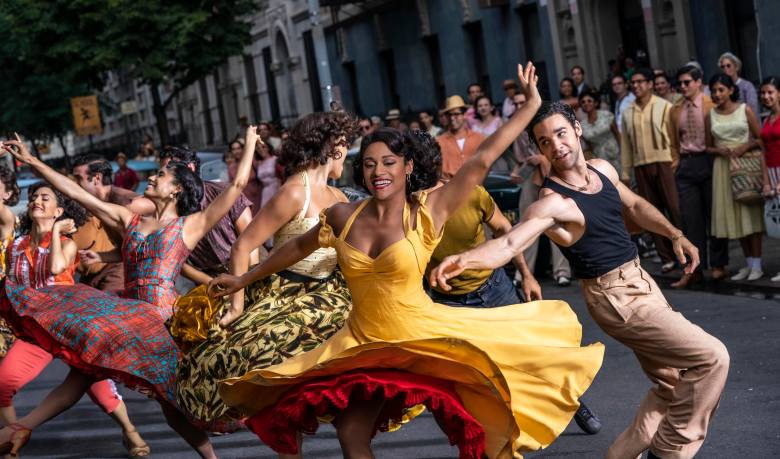 North Carolina–raised singer-dancer-actress Ariana DeBose first grabbed attention in 2009 in “So You Think You Can Dance,” which propelled her to take her chances on Broadway, where she swiftly made her mark, from “Pippin” to the original cast of “Hamilton.” When Steven Spielberg’s casting agent Cindy Tolan called her in to audition for “West Side Story,” DeBose was starring on Broadway in “Summer: The Donna Summer Musical” and told the director (who remembered meeting her backstage on “Hamilton”) that she needed time to prepare before she read for him. Spielberg, luckily, understood, and when she did audition, that prep work paid off. He cast her.

DeBose owns the screen as Anita, “one of the greatest roles ever written for a woman, especially a woman of color,” said DeBose in our video interview (above). The multi-hyphenate, who scored Critics Choice nomination and a Golden Globe win, could follow Rita Moreno with another Oscar win. She was ready to play the role because she has approached her career with a fearless and canny sense of when to grab the chance to shine, and when to build new skills. She chased the first season of “So You Think You Can Dance” after training with a range of choreographers at a competitive dance studio in Raleigh. “I ended up on the show,” she said. “And they voted me off the first week. Had I not had that experience, I don’t think I would have pursued New York.”

But that early rebuff hit the dancer hard. “It made me question whether I had talent,” she said, “because I was so young, and it was such a public brush with rejection. It made me stronger, and I developed thick skin. It gave me skills to be able to audition for any kind of dance.”

After a few months of New York auditions, she landed in the ensemble of 2011’s “Bring It On: The Musical,” which gave her experience in how to make a musical, from out-of-town tryout and Broadway run to a national tour. Unlike many other ensemble members who tend to stay in shows as long as possible, DeBose always moves on when her contracts expire. She learned more skills by understudying as Diana Ross in “Motown: The Musical” in 2013.

“I believe in challenging myself,” she said. “‘Pippin’ came along with a different style of dance, and Fosse choreography. I was understudying the Leading Player, and had to learn the trapeze.” She starred in “Hamilton” from 2015 to 2016; the movie was filmed just before both she and creator Lin-Manuel Miranda left the cast. In 2018, DeBose landed her first Tony nomination for Best Featured Actress in a Musical for playing Donna Summer.

DeBose actually shot “West Side Story” before her featured roles in “The Prom” (2020) and the Apple TV+ musical comedy series “Schmigadoon!” (2021). She first saw the musical as a young child. “I was enamored with the woman in the purple dress,” she said. “It wasn’t until much later that I realized who she was, why she was so important. Rita Moreno was the first Latino to win the Academy Award. I find her to be a beautiful example of expansion. Women like us cannot only be successful but expand our careers.”

The role of Anita is demanding. As the wife of Bernardo (David Alvarez), who is killed by Tony (Ansel Elgort), the boyfriend of Maria (Rachel Zegler), “you run the gamut of emotion,” DeBose said. “The circumstances this woman is put in are trying. You are able to show a woman with agency in the context of this time period. Our film takes place in 1957; it’s not a time when women are encouraged to speak our minds. We may have been running a business, but we were not getting the credit for it. Anita was fire, passion, love. You get to watch a woman who owns their body in a positive light. You also watch a woman go through great grief.”

DeBose is grateful to screenwriter Tony Kushner for expanding the 1961 movie. “He gave this Anita the opportunity to fully own all facets of her emotions,” she said. “We got to see her in even more circumstances. Anita came in and out of that life. The 1961 film didn’t connect certain dots. She was used as an entertainment device. Even though [Rita Moreno’s] portrayal is so deep and grounding in that film, [in this film Anita] has more material, she gets to be seen in a different light. I believe in revivals, in breathing new life into a classic story.”

Music is what sets DeBose ablaze in “West Side Story,” she said. “This character does get to sing and dance and act the whole gamut. What makes it so brilliant is the music: the Bernstein score tells the story without having to see anything. As a dancer I speak dance better than I speak English. The music tells you what to do. It’s the moment when I’m listening and it’s speaking to me and I allow it to tell me what to do. I am dancing the music, it’s a language I love; it’s so honest. Anita starts there, there’s always a rhythm to her. When she’s still, it’s for a reason. The music tells me what to do. I love Sondheim’s lyrics because they are simple and honest and not showy. I don’t actually have to do a lot. They do the work for you.”

The most challenging scene, not unexpectedly, is the candy store rape. It upset her at the time, and she couldn’t watch it at any of her four screenings. “‘A Boy Like That’ gets me because the grief is so raw,” said DeBose, “but the candy store was tough. Anita had gone there to help the young girl she loves, it’s selfless; she is not getting anything out of this. When you watch her walk into the store, you know she’s not walking out unchanged. As an actor I don’t mind playing dark emotional scenes. My mind knew it wasn’t real but my body didn’t. You don’t forget the feeling of four bodies on top of you and hands on you in various places. They rip my dress. There was a hand on my neck. It breaks my heart.”

“West Side Story” came to DeBose. She didn’t see herself in the movie, partly because “Anita doesn’t look like me,” she said. “She looks like Rita Moreno and Chita Rivera, who are not Afro Latina. The role has never explored that lived experience prior to this one. For a Black Latina, it’s a different world. I’m a Black woman. I’m still treated like a Black woman. As a white Latina you get different kinds of prejudice and discrimination coming toward you.”

Spielberg actively looked for an Afro-Latina actress to play Anita or Maria. “Anita is a character of immense power and dignity,” said Kushner. “Actors help you to get it right.”

The rise of the Black Lives Matter movement “really got me,” said DeBose. “That movement is also what makes this film so relevant, while we’re talking about skirmishes with Hispanic and Irish immigrant gangs, hate is hate is hate is hate…and senseless, needless death knows no race, religion, or grief. It’s still senseless and needless.”

As far as DeBose is concerned, the filmmakers of “West Side Story” went the extra mile in researching the Puerto Rican experience, visiting the island to interview experts, and bringing in dialect coaches. “This was a group of folks who don’t have my life experience,” she said, “but they let me and my colleagues inform every single one of these characters.”

When DeBose finally saw the long-delayed movie with four of her colleagues, “I thought I’d ruined the movie,” she said. “It was a huge movie theater on the Fox lot. It was very quiet. I thought maybe I’d messed it up. When I did hear reactions, it eased my mind.”

Next up: A break from the stage. DeBose is in demand, not only as the recent host of Saturday Night Live, but for movies. “I like making them, it’s a new challenge,” she said. In Gabriela Cowperthwaite’s space movie “ISS,” set in the international space station, DeBose doesn’t sing or dance. She learned some stunts in Matthew Vaughn’s action movie “Argylle” (Apple TV+). “It seemed logical to pursue action films or films that allow me to use my physicality,” she said. A return to Broadway will have to wait for just the right project. For now: The world is her oyster.