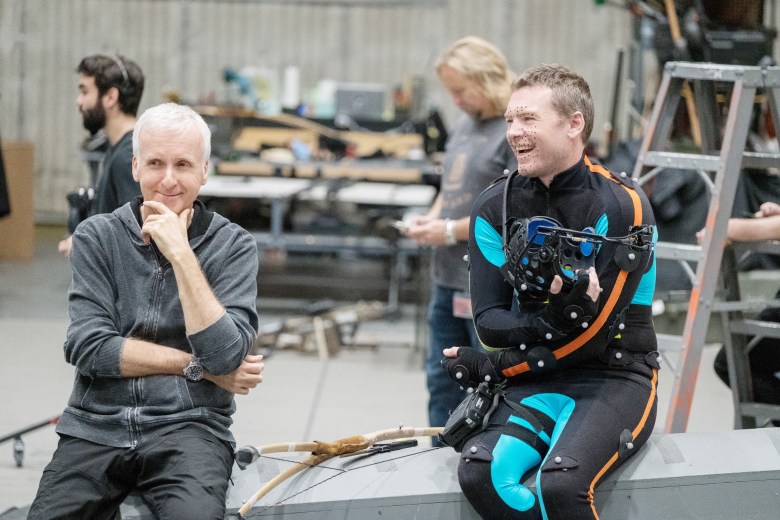 In 2009, James Cameron’s use of performance capture technology shocked the industry with its advanced ability to transform actors into entirely new beings. His sequel, “Avatar: The Way of Water” takes that gamble one step further on many fronts.

Sigourney Weaver, who played the human researcher Dr. Grace Augustine in the first movie, now portrays Na’’vi teenager Kiri, the adopted daughter of Jake Sully (Sam Worthington) and Neyitri (Zoe Saldaña); the family interacts with a giant, whale-like species called tulkun, also played by actors; and Stephen Lang, as the human villain Colonel Miles Quaritch, has now been reborn as an avatar himself.

Needless to say, there’s a lot more performance capture going around this time, and the director upped the ante by requiring his actors to perform underwater for many key scenes. Yet even the water in this “Avatar” sequel is computer-generated, and they’re once again surrounded by the colorful textures of Pandora, an alien planet created from scratch. Only the blue-faced performers — and the occasional uninhibited human face — extend from reality.

It was a lot to ask of his cast, but many of them had been through this before. “We did hit the ground running, as you have to with Jim’s stuff,” Weaver said, in a conversation with Worthington for IndieWire’s Awards Spotlight series. “You’ve got to literally take the plunge. Everyone I think went much further than they thought they could.”

The actors were quick to dispel the notion that the technology somehow outshined their skill. “I don’t think that performance capture replaces acting,” Worthington said. “Actors shouldn’t be scared of it. It actually just opens up more possibilities of characters you can play. That’s what our job is, to step into other characters, whether it’s a marine who’s now driving a nine-foot-tall alien body or a 14-year-old, or a whale.”

The 72-year-old actress spent a long time observing teenage mannerisms to craft her performance. “I had time to do a lot of research, observation, unearthing my own 14-year-old,” she said. “I had to go off to the side every day and just let Kiri take over and leave my older self behind.”

Worthington nodded. “I yielded to whatever Sigourney was giving me,” he said. “I didn’t have any judgement at all. To me, she was Kiri. Whether it’s in mo-cap or someone in prosthetics, if an actor is bringing you a character who’s fully defined, it makes the work a whole lot easier.”

Weaver smiled. “I have to say, Sam,” she said, “It’s been so wonderful being your daughter.” (Worthington was in parent mode himself during their IndieWire conversation, participating in the Zoom call over the phone while wandering Manhattan with his two kids.)

Sigourney Weaver at the premiere of “Avatar: The Way of Water”

Weaver said she also marveled at Worthington’s prolonged underwater fight with Lang in the movie’s climax, knowing the conditions they had to shoot it in. “That fight you have with Steven goes on for such a long time, and I’m sure you had to break it into lots of beats,” she said. “But how you kept the continuity of that and where your breath hold would be — it’s just such an incredible sequence. And then it goes on even longer!”

Worthington acknowledged that the fight choreography had its risks, including a moment in which he had to grab Lang in a chokehold. “The realism of it that you’re trying to get across means he could die,” Worthington said. “There’s a communication element of it that goes out because you can’t talk. You have to rely on the safety people and Jim watching it on the monitors and you have to rely on each other. The breath hold kind of disappears. Trusting the breath hold technique was easy.”

Weaver said she felt secure about the underwater scenes, which included free diving and breath-holding galore, because of Cameron’s own experiences as a diver and underwater explorer. “Luckily, Jim is half seal, so whatever he does in the water, I know it’s going to work,” she said. “He wouldn’t have gotten us so prepped and trained if it didn’t mean a lot to him to make this equally real, solid, and ours. Every day the challenge was different and sometimes the challenges were harder than usual. We weren’t looking over our shoulder and thinking, ‘Is this going to work?’”

She added that the ability to process such unusual conditions came from years of experiences well beyond the domain of performance capture endeavors. “These pictures are demanding in a different way,” she said. “That’s why they need such good actors to come alive. You really need to come with your work ready to go when you’re in a situation like this. Otherwise, it just moves too quickly, and you won’t have a good time.”

Watch the full interview above. “Avatar: The Way of Water” is now in theaters.