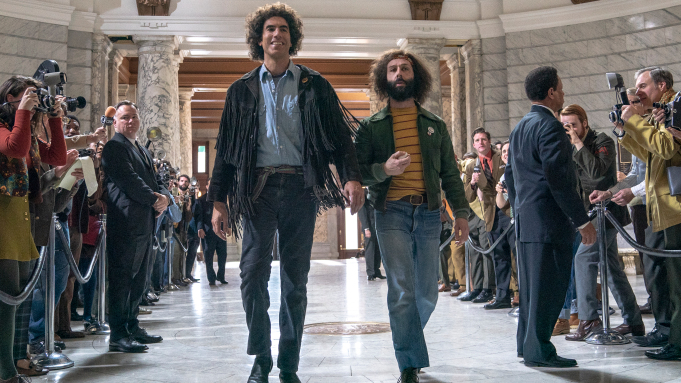 Aaron Sorkin and Jeremy Strong first worked together on Sorkin’s 2017 debut feature, “Molly’s Game.” For his second film, “The Trial of the Chicago 7,” he turned to Strong to portray activist/defendant Jerry Rubin. He may not have recognized how literally Strong would take the notion of inhabiting a Yippie disruptor.

Yes, Strong is a method actor; after graduating from Yale, he worked as Daniel Day Lewis’ assistant on the production of Rebecca Miller’s “The Ballad of Jack and Rose.” “There was a lot for me to take away and observe,” he said in our Zoom interview (above). “Mainly, the lesson is about commitment and courageousness. It had an impact on me in terms of going further out on whatever limb you’re going out on and committing to that.”

Sorkin was willing to go along with Strong (and his partner-in-crime Sacha Baron Cohen as Abbie Hoffman), to a degree. “As far as being a disruptor, it was a great struggle that produced good results,” said Sorkin. “I had a back and forth with Jeremy, and Sacha, over just how much circus would be in the courtroom.”

“The Trial of the Chicago 7”

Strong loved devising ways to make Frank Langella, who portrayed Judge Julius Hoffman, crazy. “I made it my mission to antagonize him, if I’m honest,” he said. He read passages from Langella’s sexy memoir aloud and planted a remote-control fart machine on the judge’s dais. “It’s a great take! I love Francis Bacon and he said, ‘All art is a game. The thing is to be in the game.’ I feel like, every bit of writing has its own rules, and dynamics are part of the game. It’s all an illusion: If you buy into it, it yields a lot creatively.”

So when Strong set out to rattle Langella, Sorkin said, “You’d hear me say something like, ‘Cut! Let’s try that again without a kazoo this time.'”

Strong insisted he never “crossed the line,” he said. “I feel an artistic imperative to serve the character’s needs, the forces that motivate Rubin and Hoffman as the leaders of the Yippies, anarchists and disruptors who wanted to expose this mockery of justice through guerrilla tactics through humor and dissent. Your task is to embody that and to bring that alive within the parameters of the writing.”

“It’s not about being precious about the language,” said Sorkin. “What words sound like is as important to me as what they mean. I’ve a lot of respect for writers and directors who carve out space for talented improvisers; they want the sound of that messiness, and the stuff good improvisors can bring them. I enjoy it, but it’s not the way I write it. If someone started ad-libbing in the middle of a scene, it would sound like a different episode of TV.”

Strong gets it. “I come from the theater,” he said. “When you do a Pinter, Mamet, Shakespeare, or Wilson play, you are welded to the text and the text is sacrosanct. Similarly with Aaron, I wouldn’t feel that way if I didn’t feel the text wasn’t basically perfect. It’s a complete whole: the music, the language is all there to serve you. [It’s about] marrying that freedom and wildness. That’s the greater challenge of tightrope walking with Aaron. If I’m not held in contempt of movie court, then I am not doing my job.”

Sorkin said he “didn’t want to contain him too much. You want him to be able to have the process that has allowed him to give the kind of performances I wanted him to give in the first place. I don’t want him to not be Jeremy. But would I allow him to be sprayed with teargas? No.”

“The Trial of the Chicago 7” (Aaron Sorkin, left, and Phedon Papamichael.)

Sorkin initially worried that this mighty group of actors wouldn’t play well together as an ensemble, but they showed up and delivered every day in the courtroom whether they were being “covered” by the cameras or not.

“It did feel like I was in a play,” said Strong. “Whether the camera is on you or not, it’s connective tissue, very alive like guitar strings holding everyone together that needed to be sustained.”

Neither man understood how timely the movie would become, from Trump’s demonization of dissent to the nationwide protests after the death of George Floyd. “We didn’t need or want [the movie] to get more relevant,” said Sorkin. “When protestors were met again by nightsticks and tear gas, it was 1968 all over again.”

That’s why it was crucial to him, his producers, and to Paramount to sell the movie to Netflix and get it out before the 2020 election. “Right now, when we’re talking about and dealing with these things, it would have been crime not to release it when we did.”

Strong calls the period we are in “the trial of the American soul,” he said. “In the months leading up to the election, it felt like we were on trial again. The way the film elevates protest and dissent is a patriotic act. That’s something the film imparts to the viewer.”

Sorkin agrees. “By showing these protesters as heroes, which they are,” he said, “it inspires young people as a generation — who we can tell are chomping at the bit for change — to be the ones to activate change.”