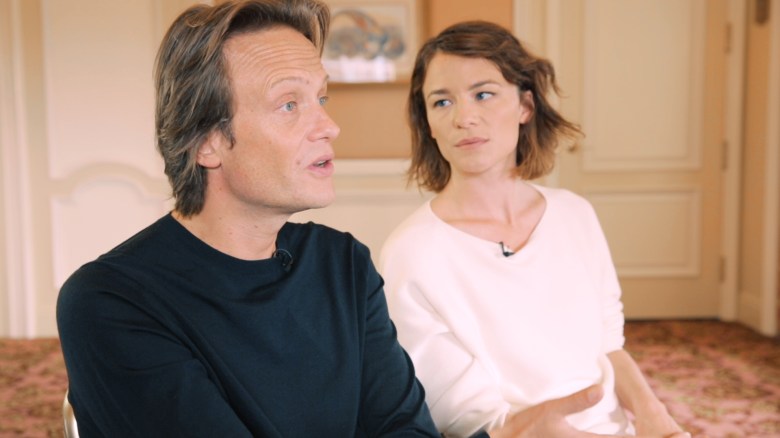 Terrence Malick is back. Fox Searchlight, which took Cannes 2011 Palme d’Or-winner “The Tree of Life” to a Best Director Oscar nomination and $61 million worldwide, won a bidding war this May at Cannes, plunking down $14 million for his ninth feature film, “A Hidden Life” (December 13). True to form, the reclusive Texas filmmaker has left publicity on the timely World War II true story to his two English-speaking German stars, August Diehl (“Inglourious Basterds”) and Valerie Pachner. (See our video, above.)

This time, Malick deploys his trademark voiceovers, editing rhythms, and stunning cinematography in service of a riveting, moving, romantic, and chilling anti-Hitler narrative. Diehl and Pachner play a loving Austrian couple with three little girls who live a bucolic existence farming in the Austrian alps, until Hitler calls. When farmer Franz Jägerstätter is called to serve, he realizes that he can’t make the required loyalty oath to Hitler.

“This is more about a private and silent choice,” said Diehl, “not something visible, not outstanding, he’s not a hero. It’s a personal and spiritual choice.” The movie’s spiritualism “comes from a simple place,” said Pachner. “Two characters have a strong connection with each other and the world they live in. The most spiritual thing is their connection, which is love.”

For Diehl, Malick’s spiritualism is in all his movies. The actors enjoyed Malick’s habitual ways of working: long, uninterrupted, improvisational 20-30 minute takes filmed in German-accented English and some German. All the actors, no matter from what country, immediately adapted to Malick’s quiet, searching mood on set.

“He’s posing questions,” said Diehl. “Does this make sense? He’s inviting you on a search not for an answer, but a question. He doesn’t want this character to be a hero or a preacher who knows good from evil.”

The filming was followed by a protracted and exacting editing process that took three more years as the actors went back for repeated voiceover recordings; the movie changed radically over time. Michael Nyqvist and Bruno Ganz both died in the interim, having shot their last films with Malick.

Both Diehl and Pachner recognize the resonance the film has today with the rise of the Far Right in Europe and America. “If it’s about our society,” said Diehl, “it’s about how a person who says ‘no’ is getting more rare. We are all jumping on one train, and have to go with it. If a person in a room says ‘no,’ we are not doing anything … Maybe this movie is not only political, but is personal — maybe this movie can help. Why is it possible that everyone jumps on a train going in the wrong direction?”

This Article is related to: Film and tagged A Hidden Life, Oscars, Terrence Malick