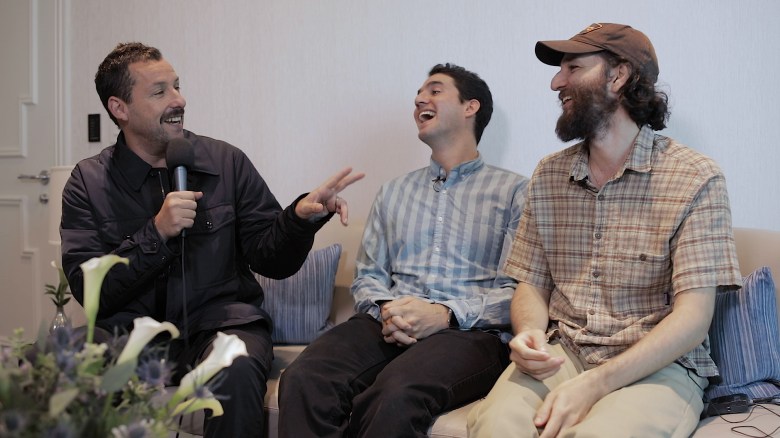 Josh and Benny Safdie’s loud, rousing “Uncut Gems” (December 13, A24) is a wild, wild ride. The New York indie rising stars, who showcased Robert Pattinson’s dark side in Cannes entry “Good Time,” turned to Adam Sandler for this fierce portrait of Manhattan’s diamond district. The Safdies crank up the volume and never let go, letting Sandler loose. The comedic actor dives into this dramatic role as a reckless New York diamond district gambler, delivering the best performance of his career.

The brothers had tried to interest him in a script ten years before, but only when Sandler’s manager persuaded him to watch “Good Time” did the actor get why he would want to work with them. “It was incredible, I couldn’t breathe, I couldn’t handle it,” he said at one of many festival Q & As. “It was the greatest movie.”

Their script was “a living document,” said Benny Safdie, that evolved over the years from snatch memories of their father, also named Howard. He was “a crazy guy lost inside his problems,” said Josh. “It was our attempt to tap into this entertaining nostalgia we felt.” They were creating a character with “a hyper-romantic view on life,” he said. “Gamblers are the most romantic people ever, you want to slap them across the face.”

The Safdies love Howard, to them he’s a hero, but at first Sandler had some trouble warming up to this sordid character who winds up stuffed naked into the trunk of his own car over a gambling debt. “I was very nervous,” he said. “I have a wife and I have kids, I know what Howard was doing, he was away from his wife and kids, he was so stuck on himself and what makes him feel valuable and his fantasies, that he was not a hero. You have to give up some dreams when you have kids and make sure their dreams are coming true.”

“There’s a lot of us in Howard and our dad in Howard,” said Benny. “Sandler is in Howard but he’s not Howard. He’s Al Goldstein, or Rodney Dangerfield.”

“These are strong guys with confidence,” said Sandler. “They’re overachievers. It’s the idea of a guy who could win you over with his optimism. He wants a partner on everything, wants to make everybody happy.”

Immersion in the diamond district and long rehearsals took Sandler deep into this specific Jewish community. But the intense flurry of activity in Howard’s jewelry store had to be built on a soundstage in Bethpage, Long Island. “We try to be as true to life as possible,” said Josh. “We took the stage to obsessive levels, the production designer wanted to kill us.”

The Safdies deployed long-lens cameras on the street scenes, using real people who wandered into the shot as well as extras, trying to capture multiple points of view. When they didn’t like the sound, Benny insisted on going back to the actual location to record more. “We would fix it and make it work,” said Josh.

In the end, the timing worked out for both Sandler and the Safdies, who brought what they learned over the years to this demanding shoot. “We’re wiser now, all of us,” Sandler said.

Sandler and the Safdies tell some hair-raising set stories in our video interview, above.