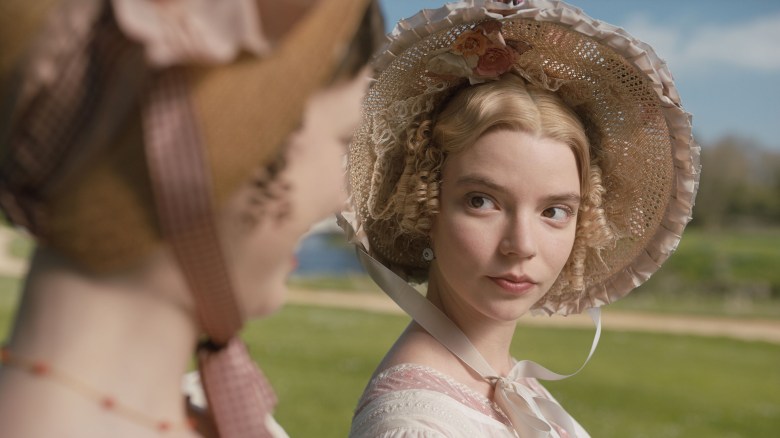 Like many movies, “Emma” started with a pitch. Working Title was planning a remake of the Jane Austen classic, which had spawned some three film and three television adaptations, when they scheduled a Skype meeting with Autumn de Wilde. She had never directed a film feature before, having built a storied career as a music photographer who crafts stories around subjects like Beck and The Raconteurs, creating characters for them, as well as a director of visually sumptuous commercials (Prada, Uniqlo) and music videos (Florence + the Machine, The Decemberists).

The director obsessively researched 18th and 19th century history, from medical science and fashion to design. “I didn’t want to do a digital pitch,” she said in our Zoom interview with her star, Anya Taylor-Joy (above). So she shipped print images that Working Title could open up and spread on the table during their Skype meeting, so they’d have “a bird’s eye view, you could see it from above. I pitched a screwball comedy because I feel that Jane Austen is very funny, besides being a genius at romance and repressed emotions.”

Working Title went along with her concept of an Agatha Christie-meets-Alfred Hitchcock suspense mystery that is also a period-romantic-comedy crammed with beautiful human beings in corsets. Novelist/screenwriter Eleanor Catton (“The Luminaries”) penned the screenplay.

Right from the start, de Wilde also pitched New York-based actress Taylor-Joy (who was born in Florida and raised in Argentina and London) as her Emma, long before her star rose from playing the chess prodigy in Netflix’s hit series “The Queen’s Gambit,” for which she was nominated for SAG and Golden Globe awards, as well as George Miller casting her as the young Imperator Furiosa in his upcoming prequel to “Mad Max: Fury Road.” Now Taylor-Joy could also win a Golden Globe for Best Actress, Comedy or Musical for “Emma.”

Callum Turner, Anya Taylor-Joy, and director of photography Christopher Blauvelt on the set of “Emma,” a Focus Features release.

As soon as de Wilde landed the gig, she flew to meet Taylor-Joy in New York. The director was already impressed with her films “Thoroughbreds” and “The Witch,” she said. “It’s so incredible that she was able to be both the victim and the villain in the same film and to play with the audience’s trust. That wasn’t someone choosing a side, right, that’s an actor who can completely believe that all of that was possible within her.”

De Wilde and Taylor-Joy agreed immediately that they wanted to stay true to Jane Austen’s Emma, warts and all, and embrace her as a female anti-hero. “It’s such a fabulous book,” said Taylor-Joy. “I wanted permission to make her mean. I just want to tell the story the way Austen wrote it. There’s this emphasis on being likable. You have to like the character. No you don’t, not all the time. It’s not interesting that way.”

“It’s important to remind you of all the bullies you’ve been obsessed with all your life,” said de Wilde.

Taylor-Joy reveled in playing the many facets of Emma, who loves to  manipulate her friends and play matchmaker. “It’s something truthful, fresh, and fun, fun to watch her behave badly,” she said.

Added de Wilde: “We all enjoy watching someone train wreck themselves, and then get out of it.”

The director threw her cast into a creative stew of period sets, props, and costumes. Alexandra Byrne custom-fit ruffled and lacey Empire dresses and coats to Taylor-Joy, who learned for the first time about “clothes acting.” “It was something integral to me playing Emma,” she said, “something that I didn’t have before her. I was never that fussed with clothes. Now I love beauty everywhere. Emma spends the money to have these incredible clothes, she wears them and shows them off. There was a yellow coat with a sunrise on the back; I found myself delivering lines over my shoulder.”

For de Wilde, design is a storytelling tool that can reveal many things, including one’s position in society: “It’s a satire on the class system, besides being a love story and story of friendship. In order to not over-explain in the script, and put the burden on Eleanor Catton and muck up the story, the costumes serve a purpose, the locations, the hair.” When Emma was having a bad day, you could see it in her ringlets.

“If you are making an Autumn de Wilde film,” said Taylor-Joy, “you will never feel like you are an accessory. You feel part of it with her.”

And de Wilde encouraged her actors to show her how they were feeling even when they had no dialogue. “Eleanor and I figured out what they weren’t saying. Then the actors added in those clues, like a mystery. ‘I gave a secret look to so and so.’ We were all working together to help all the little love mysteries unfold.”

Taylor-Joy lived to make her director laugh. “Johnny [Flynn] had a version of a panic attack,” she said. “I had my version. We’re all hot messes. It’s the real truth of how these people felt. They couldn’t be perfect all the time because they are human beings. Autumn allows you the spaces to do that.”

“I knew that the edit was going to be a challenge,” said de Wilde. “When you have somewhat of a villain, we don’t want to wear out the audience.” So the actors gave her multiple versions of every scene. “Give me a take like you mean it, you don’t care, you didn’t mean it.”

Taylor-Joy ran with it. “I was in heaven. It was so much fun.”