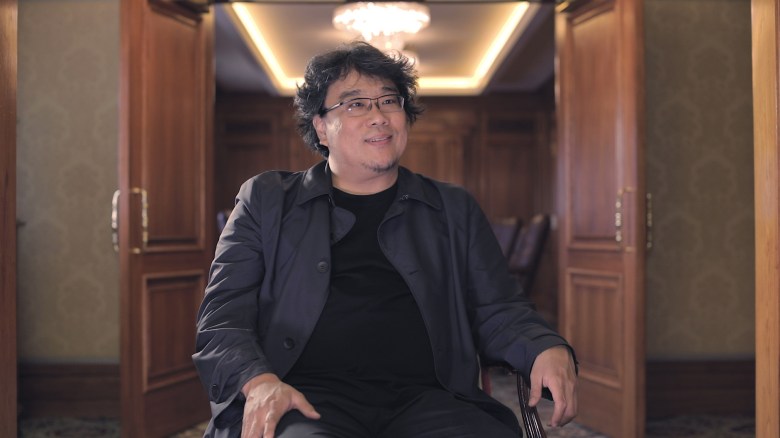 Winning the Palme d’Or at Cannes in May does not mean you land a Best Picture nomination in January. But if anyone wondered if “Parasite” had the right stuff to compete for multiple Oscars, they can stop worrying. Nothing is more potent than an awards-caliber movie that generates genuine audience interest.

And Bong Joon Ho — known by many as Director Bong — who’s created hybrid movies with East/West appeal like “Snowpiercer” and “Okja,” knows how to reach a global audience. In our video interview above, he admits that he does it by keeping himself amused: “I’m thinking about one audience, me. I want to entertain and fascinate myself. It’s impossible to figure out the audience no matter what.”

“Parasite” came to him in 2013 while he was in post-production on “Snowpiercer,” and still obsessed with the disparity between rich and poor. Over four years he developed a story about a family of con artists from the lower depths (literally, living at the bottom of the social strata in a semi-basement) who infiltrate a rich family far above them in wealth and status, who live in a gorgeous modern house.

As unlikeable as many of the film’s characters are, along the way you still root for them. “My approach was to describe the people around us in real life,” said Bong. “No one’s a complete villain. They’re in this ambiguous grey zone.” He argues that his actors deliver such realistic performances that however heightened the story becomes, you believe it anyway. “Even if the visual moods change,” he said, “the actors’ realistic tone hold the center.”

The climactic flood sequence, like everything in the movie, was planned meticulously from pre-production, combining complex production design and visual effects, and even specific camera angles on Bong’s detailed storyboards.

And as Korean as “Parasite” is in every detail, the story somehow is utterly universal. “The more Korean it is,” said Bong, “the more universal it becomes.”

And clearly, “Parasite” has global appeal. For a foreign-language movie to reach a Best Picture slot, it needs to break into wide viewership via a box-office hit. Released by Neon, “Parasite” is breaking records. It marked the biggest specialized limited opening ($376,264 in three theaters) of the year, and is the biggest platform release in three or more theaters since “La La Land” in 2016. No foreign-language film has ever opened close to these numbers. This accessible, hilarious, and disturbing dramedy is performing as though it were an English-language specialized success. With $23 million in the domestic till, it’s already grossed $105 million worldwide. That’s mainstream.

Read More: Here’s Why ‘Parasite’ Could Do Better Than ‘Roma’ at the Oscars

Netflix’s Spanish-language “Roma” made it to ten Oscar nominations including Best Picture, but it never became a mainstream hit and that’s why it did not win more than three Oscars for Alfonso Cuaron. While it lasted in theaters for months (its estimated $4 million gross could have been much higher with a proper theatrical release), the movie was viewed by most people on Netflix, which was far from the ideal way to experience this feat of immersive deep-focus Dolby Atmos cinema.

While South Korea has never landed a Best International Feature Film Oscar nomination, “Parasite” will be the first. On January 13, the movie could land a possible seven nominations, including Best Picture, Best International Feature Film, Director, Original Screenplay, Cinematography, Production Design, and Editing. That nomination would portend a potential Best Picture winner. “Parasite” could also win because it’s a zeitgeist hit. It shows us who we are, and how we exist on this planet today.